Bangalore News highlights: MPs and officials were present at the event, along with BS Yediyurappa who addressed the crowd.

The Karnataka government has launched the ‘Revenue Documents at Your Doorstep’ programme in the Chikkaballapur district. MPs and officials were present at the event, along with BS Yediyurappa who addressed the crowd.

Chief Minister Basavaraj Bommai said Saturday, “It was a pity that people were made to run from pillar to post to get basic documents like caste certificate and RTC. Therefore, Revenue Minister R Ashok has formulated this novel programme to end the plight of the poor.”

The Bengaluru city police busted a cricket gambling racket on Saturday and arrested two. They also seized the bet money and two mobile phones during the raid.

Due to untreated sewage, the Arekere lake, spread over 37.70 acres between the Arekere and Hulimavu villages, has borne the brunt of neglect over the years. The Indian Institute of Science (IISc) said in a report released in 2017 that the water quality and aquatic biodiversity of the lake were adversely affected because of the flow of untreated sewage.

Will not contest from Chamundeshwari seat in next assembly polls: Siddaramaiah

Former Karnataka chief minister Siddaramaiah is reluctant to contest the 2023 assembly election in the state from the Chamundeshwari assembly segment in Mysuru district where he had lost in 2018.

As the sitting chief minister back in 2018, he chose to contest from Chamundeshwari and vacated his 'safe seat' of Varuna in Mysuru district to son Dr Yathindra Siddaramaiah.

While his son emerged victorious, the senior Siddaramaiah lost to JD(S) leader G T Deve Gowda with a margin of about 34,000 votes in Chamundeshwari seat. “People are calling me to contest from four to five places. I have not decided yet,” Siddaramaiah told reporters here.

When asked whether he would try his luck from Chamundeshwari seat in 2023, the Congress leader said, “I will not contest from there.”

Replying to a query on the possibility of elections being held ahead of schedule following the BJP's victory in four out of five assembly polls recently, Siddaramaiah said he did not think it will happen. (PTI)

The traffic police have imposed a ban on the movement of vehicles on Goraguntepalya flyover between midnight and 5 am on all days. According to an order, vehicles must take the service roads instead during that period.

Joint commissioner of police (traffic) BR Ravikanthe Gowda issued the new order on Saturday stating that the decision was necessitated as it becomes difficult for them to distinguish between light and heavy vehicles during the night and so vehicles keep crashing onto the height barriers installed at the entry points of the flyover. Read more 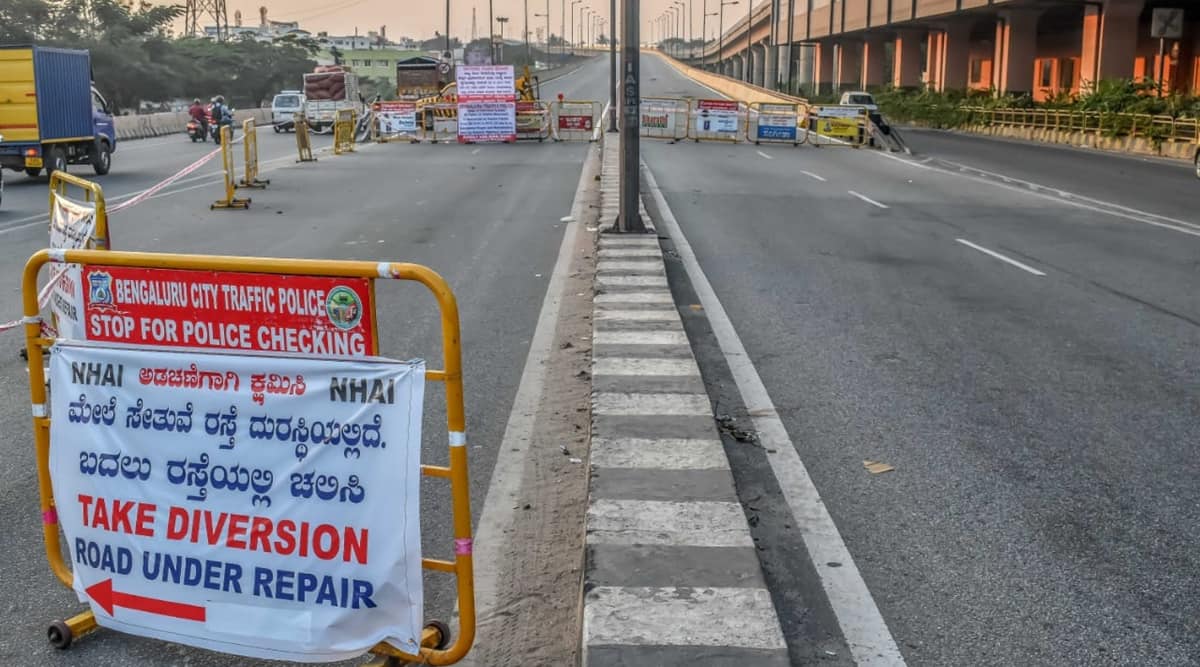 Karnataka Chief Minister Basavaraj Bommai on Sunday ruled out the possibility of anyone from the ruling BJP in the state defecting to other parties.

To a query on the possibility of early elections following a favourable outcome for BJP in the assembly elections in five states, the Chief Minister dismissed it saying these were only media speculations whereas there were no talks at any level in the party.

Regarding his visit to Delhi for the cabinet expansion as four ministerial berths were still lying vacant, Bommai said he would wait for signals from the seniors in the party. “Seniors had told me that they will give me a hint (about expansion). They have not given any indications yet. Once they do so, then I will immediately go there (Delhi),” the Chief Minister said.

Against the sanctioned strength of 34, Karnataka has 30 ministers while lobbying is still on to grab the ministerial positions, BJP sources said. (PTI)

Under 'Super 30' scheme, with the help of industries, basic infrastructures such has laboratories will be developed. In order to improve learning and teaching quality, the digital technology will be utilised. We will allow people working in industries to hold classes for students.

Smart class room, Audio and Video content of the calsses will be available. Each student's learning skills will be evaluated and if it is less than the satisfactory level, we will help to improve it. As we are associating with companies for the task, it will also help for students to get jobs.

Reports of defections is a mere speculation: CM Bommai

There is no question of any one from BJP defecting to other parties. Neither earlier, nor now, Chief Minister Basavaraj Bommai said on Sunday.

Speaking to media persons he said, 'I can tell you categorically that no one from our party will defect to other parties. As for any one from other parties hopping into BJP, just wait and see.'

The BJP State Executive meet would be held on March 30 and 31. The meeting will deliberate and decide on the proposed State tour of the leaders and all other issues,' Bommai said.

The Chief Minister ruled out the possibility of an early election in the State.Replying to a question on Cabinet expansion, he said that he would visit Delhi when he gets the call from the party top brass to discuss the issue.

The process to bring the mortal remains of Karnataka student Naveen would be initiated immediately on stoppage of hostilities in Ukraine, he said. (ENS)

Joint Secretary, Ministry of Civil Aviation, Amber Dubey on Saturday said that the major intent behind liberalising the drone policy in India was to make it a global drone hub. “We have made the policy so liberal that the entire concentration should be more on research and development. There is no sector left where drones cannot be used. The applications are in law and order, defence, agriculture and so on. It will play an important role in war. We have come up with a liberalised policy on drones,” he said at an international virtual conference on the ‘Future of Aerospace & Aviation (FoAA)’, hosted by the Executive Education Programmes Office of IIM Bangalore. Read more

The orders from Director General of Police (DGP) Praveen Sood came after Satare registered a FIR pertaining to a case with Sarvodaya Education Trust.On January 25, there was an altercation between staff and management of the trust and a few members of Valmiki community in Mugad village over an issue, Then Mohan Gudasalmani, a leader from Valmiki community had filed a complaint with the police alleging that at Horatti’s behest five others had assaulted him and other members of his team at the school.Haoratti who heads the Sarvodaya Education Trust was in Bengaluru when the incident took place on January 25.

The issue was raised in the ongoing legislature sessions with and few members of the council had sought action against the police officials. (ENS)

Based on specific intelligence, officers of NCB, Bengaluru Zonal Unit intercepted an outbound parcel at a courier centre in Bengaluru on the night of March 11.

The parcel was supposed to be delivered in New Zealand and on after a thorough examination of consignment 50 spools of metallic yarn was discovered. Each spool was concealed with powdery contraband to the extent of 40 grams(approx). The powdery content was found to be Pseudoephedrine, a controlled substances under NDPS Act.

In total 1.970 kgs of Pseudoephedrine was seized from 50 spools. In a swift follow up action two persons were apprehended. One was Indian and another South African national. Pseudoephedrine is a precursor & controlled substances in India and it is illegally exported as it is the main ingredient used to make Methamphetamine (meth), a highly addictive stimulant drug. (ENS) 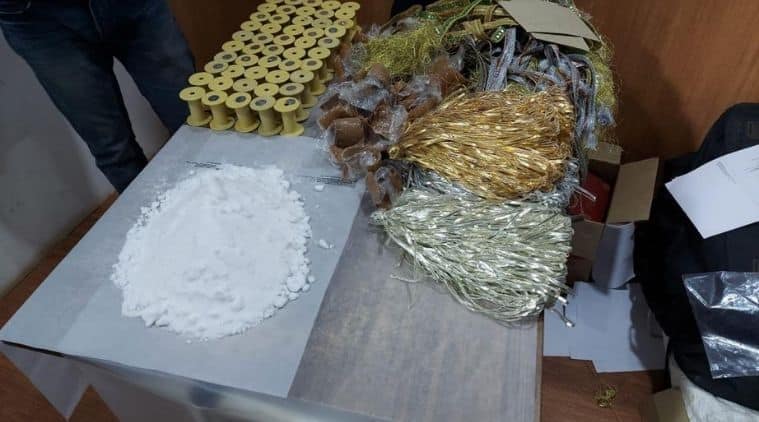 On Saturday, B S Yediyurappa attended the grand opening of the new stone pavilion, various works of the Jagadguru Ujjain Guru of the Ujjain Mahapeetham, Sri Siddalingaraja Desi Kendra Shivacharya Mahaswamy, the Sri Mallikarjuna Temple at Togarsi Sreekshetra are present.

Senior Congress leader and MLC C M Ibrahim on Saturday said he has resigned from the primary membership of the party, and was inclined to join the JD(S). The senior politician, however, said he will announce his decision to join the regional party after discussing with the JD(S) leadership, including former Prime Minister H D Deve Gowda, in a couple of days.

Two days after the BJP's electoral triumph in four states, JD(S) patriarch H D Deve Gowda on Saturday said it will be good if all secular regional parties, including the Congress, unite in the interest of the country. He also praised Prime Minister Narendra Modi for his commitment to expanding his party across the country, pointing at his trip to Gujarat, where elections are slated by the end of this year, soon after five state election results, and expected similar quality in his own party leaders and workers.