Months ahead of Ganesha Chaturthi, the Karnataka High Court has reiterated that immersion of idols in lakes should not be allowed. The authorities have been asked to identify other places for the same. 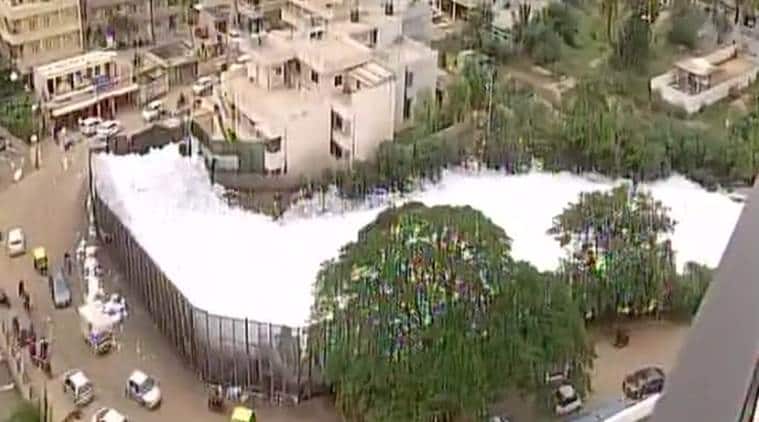 Bellandur lake in Bengaluru which is infamous for frothing. (Source: ANI_News/Twitter)

Bengaluru’s local civic body Bruhat Bengaluru Mahanagara Palike (BBMP) will soon install closed circuit television (CCTV) cameras around all lakes in the city in a bid to prevent illegal activities such as encroachment, damaging or dumping garbage and other materials into the water bodies.

The action will be taken as part of a recent Karnataka High Court directive, BBMP officials told Indianexpress.com. “We have been thinking about the same for quite some time now and this directive will ensure that the process is completed faster. Saving our lakes from encroachment and other issues has been a top priority for BBMP all these years,” an official from BBMP lakes department said.

At the same time, the Karnataka High Court came down heavily on BBMP Tuesday saying, “Prima facie we find there has been a complete failure on the part of the state government and its authorities to protect the lakes/tanks and other water bodies in the city of Bengaluru.”

The Division Bench comprising Chief Justice Abhay Shreeniwas Oka and Justice H.T. Narendra Prasad was dictating an interim order on litigation filed in 2014 which pointed out poor maintenance of stormwater drains (SWDs/rajakaluves) and entry of sewage into the lakes in Bengaluru.

Imposing a deadline of six weeks to resolve the issue, the bench also directed the BBMP to come up with a comprehensive plan to prevent lake encroachment. The BBMP has also been directed to clear the garbage, if found near lakes, on a daily basis. The bench further added that the local civic body should take proactive measures to create public awareness to avoid citizens dumping garbage and other materials into the lakes.

Months ahead of Ganesha Chaturthi, the Karnataka High Court has reiterated that immersion of idols in lakes should not be allowed. The authorities have been asked to identify other places for the same. The court also stated that the progress of the actions taken with regard to the protection of lakes will be monitored on a regular basis.