The survey, which was conducted from November 19 to 23, revealed that 53% of evening commuters felt no difference as they continued to get stuck in peak-hour traffic, which Bengaluru is infamous for. 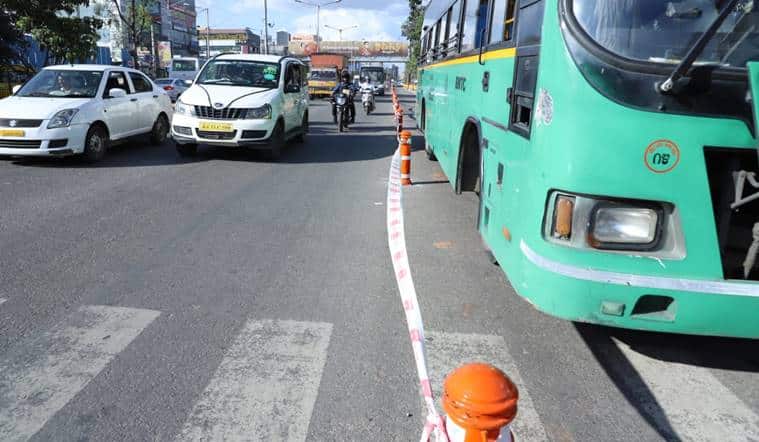 The number of people spending over two hours daily on bus commute has substantially reduced by 62%, the survey found. Express Photo

A citizen survey conducted in Bengaluru found that 55 per cent of commuters experienced reduced travel time even amidst several issues affecting the smooth functioning of the city’s first Bus Priority Lane (BPL) on the Outer Ring Road (ORR).

The ORR Bus Priority Lane Commuter Survey conducted by Citizens for Bengaluru (CfB), a civic activist group, also revealed that the number of people spending over two hours daily on bus commute has substantially reduced by 62 per cent since the introduction of the city’s first BPL on the Silk Board-K R Puram route ten days back.

However, the survey, which was conducted from November 19 to 23, added that 53 per cent of evening commuters felt no difference as they continued to get stuck in peak-hour traffic, which the city is infamous for.

The results of the passenger survey revealed that poor visual signages on the road to help others distinguish BPL, substandard enforcement of lane discipline, and parking of private vehicles on bus lanes were among the major hurdles forcing drivers to hit the brakes, thereby decreasing average bus speeds.

While 75 per cent of commuters felt visual signages needed improvement, 81.1 per cent did not see any traffic police controlling buses at the stops. At the same time, 83.8 per cent of passengers said they failed to spot any Sarathi vehicle, designated to assist buses to move smoothly on BPL.

Passengers also suggested that BMTC drivers themselves failed to keep the lane at times. During evening hours, buses stopping for a longer time to load passengers also add to increased travel time, according to the commuters.

Commuters said signages in Kannada providing information to help distinguish BPL was a necessity. “Info display-audio systems and enough space for at least two buses in each bus stop would make boarding and deboarding easier and smoother for us, which would, in turn, result in saving a few more minutes of commute,” Harish N, a techie, said.

Interestingly, a large share of bus commuters on Bengaluru’s ORR pointed out to the Bengaluru City Traffic Police (BTP) that private vehicles occupying the BPL should be penalised on a frequent basis.

According to an official notification released by BTP, offenders would be fined Rs 500 for the first offence and Rs 1,000 for every subsequent one for encroaching the bus lane.

READ| Explained: How Bengaluru hopes to decongest traffic with its bus priority lanes

Another major grouse of the commuters include educating Ola/Uber cab drivers of not encroaching on the BPL, educating BMTC bus drivers to keep the lane to ensure safety for other vehicles, installing chained bollards to avoid any kind of encroachment and decreasing bus fares.