AAP organized the march asking for the immediate removal of the encroachments and also sought MLA Aravind Limabavali’s resignation, who, they alleged, has turned a blind eye to the issue. 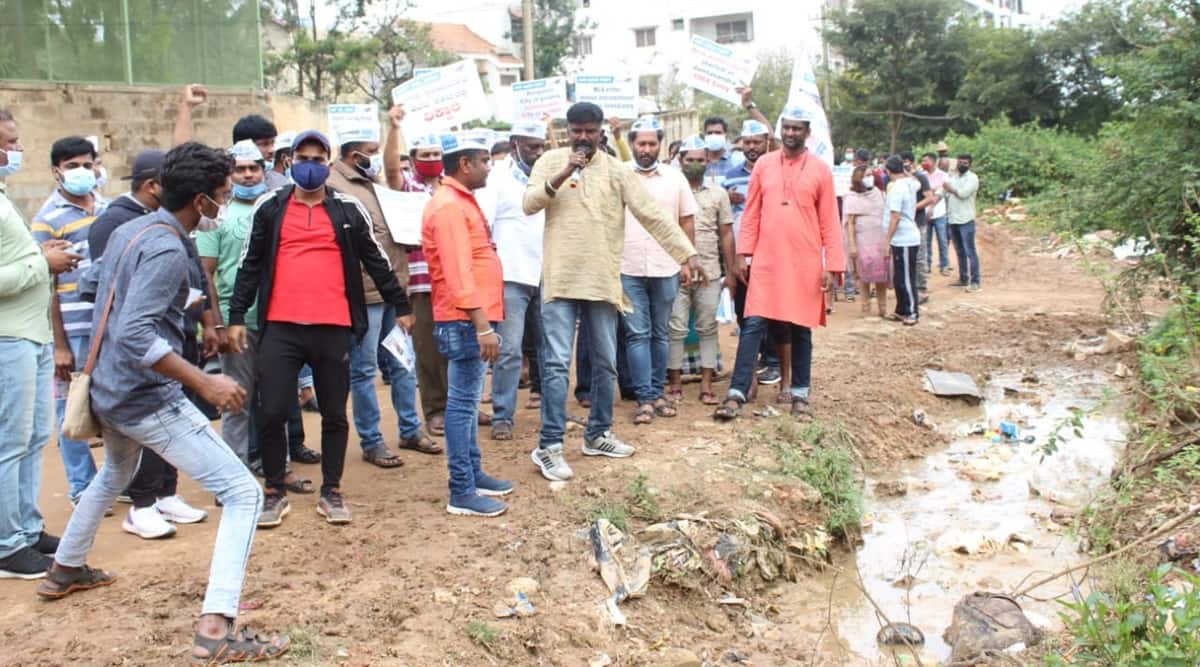 APP volunteers and locals during the protest march in Mahadevapura. (Express Photo)

Aam Aadmi Party (AAP) volunteers and the residents of Junnasandra and Green Village layout, which fall under the Mahadevapura constituency, took out a rally demanding the removal of encroachments around the storm water drains (SWD), which are one of the major reasons behind the flooding of the areas following rains.

The protest was launched two days after the areas were inundated, forcing the residents to stay indoors.

AAP organized the march asking for the immediate removal of the encroachments and also sought MLA Aravind Limabavali’s resignation, who, they alleged, has turned a blind eye to the issue.

Bengaluru Urban AAP president Mohan Dasari blamed Limbavali for ignoring the civic issues plaguing the local residents for the past several years. “He is the MLA of the area for the last 13 years. The roads here are miserable. The place doesn’t have any basic facilities. Limbavali has failed to bring in any form of development. It is better that he resigns,” he added.

Ashok Mruthyunjaya, the Mahadevapura Assembly President of the AAP, said, “Due to encroachments of the SWD by influential people in the constituency, the people of Junnasandra and Halanayakanahalli are forced to live in filthy water. The 40-feet road towards the Green Village layout has turned out into a filthy swimming pool. Arvind Limbavali, the person who is responsible to protect people’s interest, has turned a blind eye towards these issues.”

He added, “Children here cannot step out to play. There have been reports of diseases like dengue and malaria because of the accumulated water. The sheer neglect by BBMP and Limbavali is the sole reason for this disaster.”

The residents alleged that a private layout has been constructed over the SWD resulting in flooding of the area. Though 70 sites were identified as encroachments by the revenue department, no action was taken.