The new Cabinet, which took oath in the afternoon, bears the mark of Yediyurappa as nine rebel MLAs from the Congress and JDS, who defected to the BJP in 2019 to help him become the chief minister, have been picked again as ministers, and several dissidents who frequently targeted him kept away. 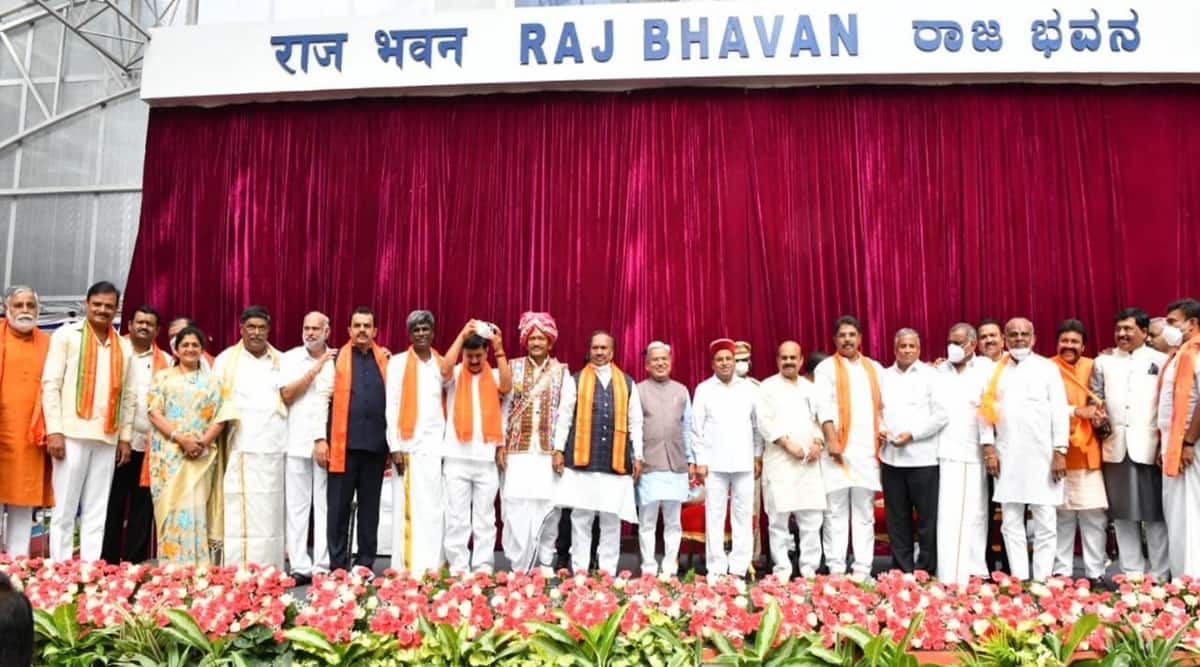 AFTER THREE days of brainstorming with the BJP central leadership in Delhi, Karnataka’s new Chief Minister Basavaraj Bommai returned to Bengaluru on Wednesday with a list of 29 ministers – the majority of whom have the backing of previous chief minister B S Yediyurappa.

The new Cabinet, which took oath in the afternoon, bears the mark of Yediyurappa as nine rebel MLAs from the Congress and JDS, who defected to the BJP in 2019 to help him become the chief minister, have been picked again as ministers, and several dissidents who frequently targeted him kept away.

The only setbacks that Yediyurappa appeared to have suffered was the absence of his younger son B Y Vijayendra from the ministry list, and the inclusion of Shashikala Jolle, a former minister who has not been on good terms with him. Jolle is the sole woman minister in the new ministry.

Crucially, unlike during Yediyurappa’s tenure, the BJP central leadership decided that Bommai will not have any deputy chief ministers following apprehensions that they could end up as alternate power centres. “Last time, in the ministry of Mr B S Yediyurappa, there were three deputy CMs. This time there will not be any deputy CM, the party high command has said. Further, experience and youth has been balanced in the Cabinet,” Bommai said ahead of the induction of his new ministry.

Bommai and 14 of the ministers visited Yediyurappa’s residence to greet him after the new Cabinet list was announced. The former chief minister later attended the swearing-in ceremony.

In the new ministry, eight ministers are from the dominant Lingayat community of north Karnataka, to which Yediyurappa and Bommai also belong; seven from Vokkaliga community, which is dominant in south Karnataka; and seven from OBC communities. Others include three Dalits, two Brahmins, one tribal and one from the Reddy community.

“Some seniors who have experience in party work must be utilised for party work – that is the feeling of the party leaders,” Bommai said, suggesting that Suresh Kumar and Limbavalli may be part of a rejig of the state unit of the BJP, which is likely later this year.

Munirathna was among the 17 rebel MLAs from the Congress and JDS who were promised ministerial berths by Yediyurappa after helped the BJP come to power. With Munirathna’s entry, nine of these legislators are now in the ministry. The others are Byrathi Basavaraj, S T Somashekhar, B C Patil, K C Narayana Gowda, M T B Nagaraj, Y Gopalaiah, K Sudhakar and Shivaram Hebbar.

C P Yogeshwar, Arvind Bellad and Basavaraj Patil Yatnal, three legislators who were strident critics of Yediyurappa, did not find a place in the Cabinet while Sunil Kumar, who raised issues within the party framework, found a place.

Yediyurappa’s younger son Vijayendra, who is looking to make his way into mainstream politics after being labelled a “Super CM” for operating from behind the scenes when his father was in power, did not find a place in the Cabinet. Vijayendra is at present not a member of the legislature.

“On Vijayendra, our national president has spoken to Yediyurappa. Our state in-charge Arun Singhji has spoken to Vijayendra. I can say this much – his name is not on the list,” Bommai said.

In the first Cabinet meeting since the new ministers were sworn in, it was decided that the ministers will visit the districts to review the flood and Covid-19 situation. It was also decided to reconstitute a Covid-19 task force, set up a secretariat for welfare of Scheduled Tribes and implement women’s safety and welfare programmes in various departments.

Here’s the full list of Ministers who were inducted into the Basavaraj Bommai-led Karnataka cabinet:

(With inputs from Ralph Alex Arakal)

Israeli army says it fires back after 3 rockets from Lebanon