Follow us LIVE here to stay posted on everything about Bangalore weather today, temperature forecast, pollution levels, all important developments, power disruption updates and much more.

Bangalore LIVE News updates: A naval officer died at Karwar atfter a fire broke out onboard aircraft carrier INS Vikramaditya. Identified as Lt Cdr D.S. Chauhan, the deceased was harmed while he was leading the firefight in the affected compartment of the ship on April 26 morning, the Defence Wing confirmed.

“Whilst the fire was brought under control, the officer suffered loss of consciousness owing to the smoke and fumes during the firefighting efforts. He was immediately evacuated to the Naval Hospital at Karwar, INHS Patanjali for medical attention. However, the officer could not be revived,” a press note explaining the situation read.

Security has been stepped up in and around Bengaluru city and Kempegowda International Airport in the light of serial bomb blasts take took place in Sri Lanka since Easter Sunday.

Karnataka deputy CM G. Parameshwara has requested citizens to inform the nearest police station in case of spotting any suspicious activity. “It is the duty of the government to ensure citizen safety and the same is being taken seriously,” he said on April 26.

Bengaluru City Police Commissioner T. Suneel Kumar had convened a meeting with hoteliers, mall owners and religious leaders on April 25 to brief them about security measures. Police have instructed all places of worship to install CCTV cameras and deploy private security guards or volunteers to keep a tab on visitors.

Read more: Security beefed up in Bangalore and other key areas of Karnataka after Sri Lanka serial blasts

Meanwhile, Bruhat Bengaluru Mahanagara Palike (BBMP), the civic governing body of Bangalore has drawn flak from citizen groups and other activists for their recent MoU signing with a French company. The BBMP contract is in place with 3Wayste to set up a state-of-the-art waste-to-energy plant in Bangalore.

“None of such plants are successful in India. All of them failed, resulted in huge damage to environment & ultimately closed. We don’t know why govt takes such nasty decisions which will make life of residents tough in future,” Electronic City Rising, a citizen group criticised the move on Twitter.

The National Gallery of Modern Art in the city will host special screenings at their auditorium to commemorate the Jallianwala Bagh massacre. The event will be held from 3 pm today.

#NeraluWhitefield, a tree census for WF.

This is an open call for volunteers, ages 12 & above (good internship!). We will start with the main roads, mainly:
- Hopefarm-Kodi
- Kodi-KGate
- KGate-Hoodi
- Hoodi-Hopefarm

Karnataka to use Aadhaar to track every pregnancy

The Department of Health and Family Welfare, Karnataka will track every pregnancy in the state, from conception to birth, with the help of an Aadhaar-linked unique ID number. Hundreds turn up for a chance in KGF 2 Movie

More than 100 people line up outside a private hotel in Malleshwaram, Bangalore for the audition for the sequel of Kannada movie KGF 2.

"It is the duty of the government to ensure citizen safety and the same is being taken seriously," he said.

He has also tweeted on the same:

It's the duty of Govt to ensure safety of its citizens & K'taka govt takes it seriously. While we take every precaution & tighten security, we request citizens to aid us.
If you spot any suspicious activity, please inform your local police station immediately. Be alert & aware.

IIMB’s Professor L Prasad spoke on the importance of having astute leaders in the country to empower nation-building.

“To build India, we need more leaders and fewer bosses,” he said in a talk held as part of IIM Bangalore’s EPGP Seminar Series.

Prof. Prasad describes an astute leader as one who has the ability to look beyond the obvious and transform people.

IIMB’s Professor L Prasad describes an astute leader as one who has the ability of look beyond the obvious and transform people. “To build India, we need more leaders and fewer bosses,” he says in this talk at IIM Bangalore’s EPGP Seminar Series.https://t.co/OncwgS5jxz

Power will be restored by 3 pm, informs BESCOM

1,439 positive cases of  H1N1 (Influenza A) detected since January 2019 and 39 deaths confirmed in Karnataka. 227 cases are from Bangalore, while Udupi has seen 193 cases, Dakshina Kannada has recorded 146 cases and Mysuru 117 cases of viral infection have been reported. Check out the air quality around you in Bangalore

Average Air Quality in Bengaluru is Moderate. At 9 am, PM 2.5 (Fine Particulate matter) is at an unhealthy level if you are near BTM Layout, Peenya or Silk Board. The same is  at moderate levels near City Railway Station and Jayanagar 5th Block

According to the minister, the meeting also deliberated on the plan to further the Yethinahole project to ensure drinking water supply to Kolar, Chikkkaballapura and Bangalore Rural areas

Lok Sabha polls to all 28 constituencies in Karnataka might be over but that doesn't mean our politicians got some time to chill. 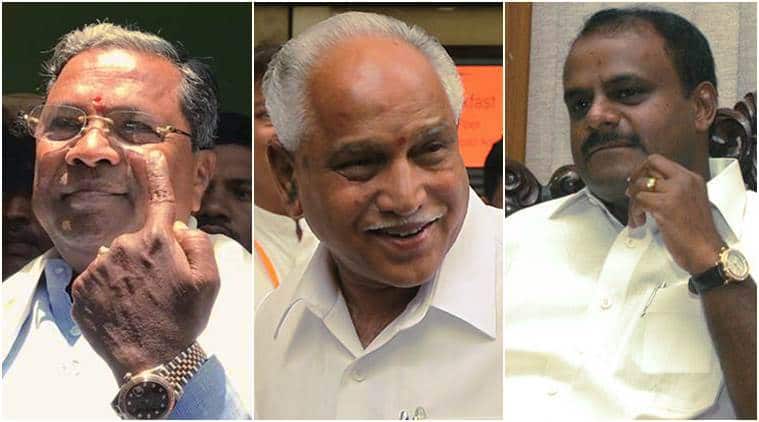 Top leaders of Congress, JD(S) and BJP in the state are holding marathon meetings now to decide on finalising the candidates for two seats to the Vidhan Sabha (Karnataka Legislative Assembly), namely Chincholi and Kundgol.

The National Gallery of Modern Art plays host to special screenings organised as part of commemorating Jallian Wala Bagh massacre, in the light of its centenary.

The screenings will be held at the Auditorium, National Gallery of Modern Art, # 49, Manikyavelu Mansion, Palace Road from 3 pm today.

The mercury levels in the city are expected to be between 23 and 35degree Celsius respectively, according to IMD.

However, rain and/or thundershowers are likely in some areas, mostly by evening.  Plan your weekend well and enjoy maadi!