As the Karnataka SSLC results were announced today, two students — Srujana D (St Philomena English High School, Bangalore) and N Parameshwar Naik (Colaba Vithob Shanbhag Kalabagkar High School, Uttara Kannada) — have topped scoring 625/625. A total of 11 students scored 624/625. The exams were held from March 21 to April 4. This year, the pass percentage has seen a 1.77% increase than that of 2018, at 73.7%.

Residents of RR Nagar and Hemmigepura wards complained to the BBMP that the leaves are collected, dumped burnt in the area is causing a health risk to the residents.

As monsoon season is fast approaching, the Bangalore Traffic Police has begun with their task of filling up potholes in the city. Earlier, the BTP had conducted a study to spot potholes in the city that needs to be filled up immediately. While Old Airport Road, Indiranagar and 100-feet Road were picked for the first day, policemen were seen supervising the process next to Ejipura and Koramangala areas on April 29. Pothole filling continues in the city as the day progresses.

Bangalore may face call drops and disruption in internet services in coming days. This is due to city’s civic body Bruhat Bengaluru Mahanagara Palike (BBMP) taking up the process of cutting telecom cables laid over the ground due to non-payment of fee and failure to follow the existing norms. The move by the BBMP has got internet service providers (ISPs) up in arms and attracted criticism by the Cellular Operators’ Association of India (COAI).

The Bengaluru City Traffic Police has prohibited parking on 12 roads adjacent and around M. Chinnaswamy stadium for today. This is part of several steps taken towards ensuring a smooth experience for spectators and other commuters on road, in the light of the IPL match scheduled to be played between home team Royal Challengers Bangalore and Rajasthan Royals. While parking areas are provided at several spots in and around the stadium from 2 to 11.30 pm, autorickshaws will not be plying on selected areas of Queens Road, Cubbon Road and MG Road from 5 pm to 11.30 pm on Tuesday.

Traffic Regulations in place for IPL: Parking prohibited on 12 roads

The Bengaluru City Traffic Police has prohibited parking on 12 roads adjacent and around M. Chinnaswamy stadium today. This is part of several steps taken towards ensuring a smooth experience for spectators and other commuters on road. Burning leaves causing a health risk to the Bangalore residents.

Residents of RR Nagar and Hemmigepura wards complained to the BBMP that the leaves are collected, dumped burnt in the area is causing a health risk to the residents. Rainfall forecast for next 48 hours as on 29th April 2019 by KSNDMC: Isolated to scattered light to moderate rains likely over south eastern districts of SIK & southern districts of Coastal Karnataka & Malnad region. Temperature forecast for next 24 hours by KSNDMC

According to Karnataka State Natural Disaster Monitoring Centre(KSNDMC) Maximum temperatures likely to be above normal at a few places over interior Karnataka and likely to be normal over remaining part of the state during the next 24hrs. Congratulations to students who have passed the #SSLC exams with flying colours.
73.7% students have passed this time and the State has performed better than the last year.
Karnataka Government will strive to improve this in the years to come.

Chaired a meeting with BWSSB Chairman and other relevant officials to discuss on providing long term solutions for drinking water issues in Sarvagnanagar Constituency. #ModelSarvagna pic.twitter.com/gaY5zhQ8Dg

The mercury levels are at 33 degree Celsius in Bangalore at 2 pm on April 29. 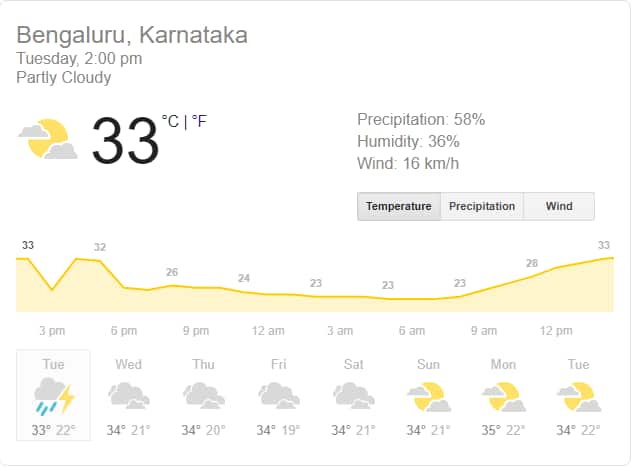 Read: Declared! Karnataka  SSLC 10th result 2019: When, where and how to check result at karresults.nic.in

Karnataka SSLC Results 2019: The evaluation was held in 228 centres across all 34 education districts

The evaluation was held in 228 centres across all 34 education districts in the state from April 10 to 25. 58,876 evaluators took part in the process.

Karnataka SSLC Results 2019: Evaluation was held in 228 centres across all 34 education districts in the state from April 10 to 25. 58,876 evaluators took part in the process @IndianExpress | @IEBengaluru

Nominations for Chincholi, Kundgol bypolls to be scrutinised today

Soon after the Lok Sabha elections, politicians in the state are busy planning campaigns and supporting their next set of candidates. Bypolls to two legislative assembly constituencies - Chincholi and Kundgol are scheduled to be held on May 19.

The nominations to these constituencies will be scrutinised today.

As lakhs of students and parents anxiously await the SSLC results scheduled to be released by 12 noon today, BJP leader and former CM B.S. Yeddyurappa wishes them good luck.

I wish all my young friends who had appeared for 10th std examinations all the very best.

Take the results in a good spirit, make wise decisions and be the bright future our country needs.

Over 8.41 lakh students from Karnataka had registered. The highest number of students registered from Bengaluru South with 65,451 students, followed by Bengaluru North with 49,336 students.

As power disruption issues continue to trouble Bangaloreans, as many as 7,034 complaints were registered on Monday (April 29), BESCOM confirms.

While 6832 were resolved, 202 of them are pending and has been carried over for today.

The weatherman has predicted a generally cloudy sky in and around the city for the day. In the light of cyclone Fani expected to intensify as a 'severe cyclonic storm', the IMD has predicted rain/thundershowers in some areas. Maximum and Minimum temperatures very likely to be around 35 and 24 degree Celsius respectively

As many as 43,736 students will take the Karnataka Common Entrance Test (KCET) in the city today in in 84 centres. The gateway for admission to professional courses, today is day 2 of the entrance test. In total, 1,94,282 students have registered for the test held in 431 centres across Karnataka.