Follow us LIVE here to stay posted on everything about Bangalore weather today, temperature forecast, pollution levels, all important developments, power disruption updates and much more.

The Karnataka Secondary Education Examination Board (KSEEB) will declare the Karnataka SSLC result 2019 tomorrow at 12 pm.

With monsoon fast approaching in Karnataka, Chief Minister H.D. Kumaraswamy has directed the Chief Secretary and concerned officials to monitor the situation and take measures to prevent floods and rain-related problems.

On Sunday evening, Chief Minister office issued a statement which reads, “As the election code of conduct is still in force, it will not be possible for ministers or elected representatives to visit affected areas to monitor the review work. The Chief Minister spoke to the Chief Secretary over the phone and advised to constitute committees of officials to look into the matter and to give special attention to areas such as Kodagu and coastal Karnataka which were adversely affected by floods last year.”

Bellandur Lake is the city’s largest lake, and one of the only 70 that survive from the 272 of four decades ago. The lake is set to be desilted in the coming weeks. According to BDA, the water is being channelised to the downstream of Varthur Lake by opening up the sluice gates, after which the lake will be desilted.

Meanwhile, after the recent Sri Lanka serial bomb blasts, the Karnataka police is on high alert across the city and state. Strict vigilance being enforced at all public places. All DCs and security officers have been asked to report the action taken compliance every hour. Anti-sabotage check by Dog Squad was also held at the Kempegowda Bus Station (KBS) at Majestic area

Bangalore News Highlights: Watch this space for everything you need to know in Bangalore - weather, traffic, power disruptions, pollution levels and other important developments as the day progresses

Karnataka SSLC result will be announced tomorrow at 12 pm

Just a few hours after actor-turned-politician Ramya posted a picture of PM Narendra Modi holding a kid's ears collaged with a similar photograph of German dictator Adolf Hitler, she has found herself in soup.

What are your thoughts? pic.twitter.com/b8GcgKL2ih

Team BJP Karnataka, her arch rivals on and off social media, has mocked her for her absence during the polling hours for the recent Lok Sabha elections. Karnataka had gone to the polls on April 18 and 23. Even though low voter turnout in many places including capital city Bangalore hit headlines, many were seen asking whether social media savvy Ramya exercised her franchise.

The mercury levels are at 34 degree Celsius in Bangalore at 3 pm on April 29.

IIMB to host 'Social Start-up Santhe' on May 10

In a bid to bring together entrepreneurs and changemakers in the social sector for creating opportunities for cross-learning and visibility, IIM Bangalore is all set to host a special event.

Titled ‘Social Start-up Santhe’, the event organised by the innovation and entrepreneurship hub NSRCEL will take place on May 10 (Friday). The event includes workshops, a panel discussion by eminent leaders in the social space, peer-to-peer sessions and other activities.

The Chief Guest at the event will be Sameer Garde, President, Cisco India and SAARC.

The death was reported at 10.30 am from a private hospital in Hyderabad after he suffered from a cardiac arrest.

The Funeral will take place on Tuesday at 1.00 pm at Bhalki, his native.

Dr Khandre made his way from Bhalki to the Karnataka legislative assembly in 1989 as an independent MLA. However, he was elected from the same constituency in 1994 as a Congress MLA.

Check out the air quality around you in Bangalore

Average Air Quality in Bengaluru is Moderate. At 12 noon, PM 2.5 (Fine Particulate matter) is at an unhealthy level if you are near Hebbal. The same is  at moderate levels near Peenya, BTM Layout and Silk Board

Traffic Regulations in place for IPL: Parking prohibited on 12 roads

The Bengaluru City Traffic Police has prohibited parking on 12 roads adjacent and around M. Chinnaswamy stadium on April 30. This is part of several steps taken towards ensuring a smooth experience for spectators and other commuters on road. While parking areas are provided at several spots in and around the stadium from 2 to 11.30 pm, autorickshaws will not be plying on selected areas of Queens Road, Cubbon Road and MG Road from 5 pm to 11.30 pm on April 30.

#IEAlertsBangalore | @BlrCityPolice requests @IPL spectators to use public transport facilities to commute to and from M. Chinnaswamy stadium for @RCBTweets v/s @rajasthanroyals on April 30. Special measures to be taken to avoid traffic around the stadium.

On Anti-Child Labour Day, Bangalore to discuss ways to abolish the practice

Observing national Anti-Child Labour Day, Bangalore will host a special one-day consultation on 'The Role of Right to Education in Abolition of Child Labour Practice' on April 30.  Organised by the Peoples' Alliance for Fundamental Right to Education (PAFRE), the event will be held at SCM House, CSI Compound, Mission Road from 11 am to 5 pm on Tuesday. Peak hour traffic is getting heavier on several roads 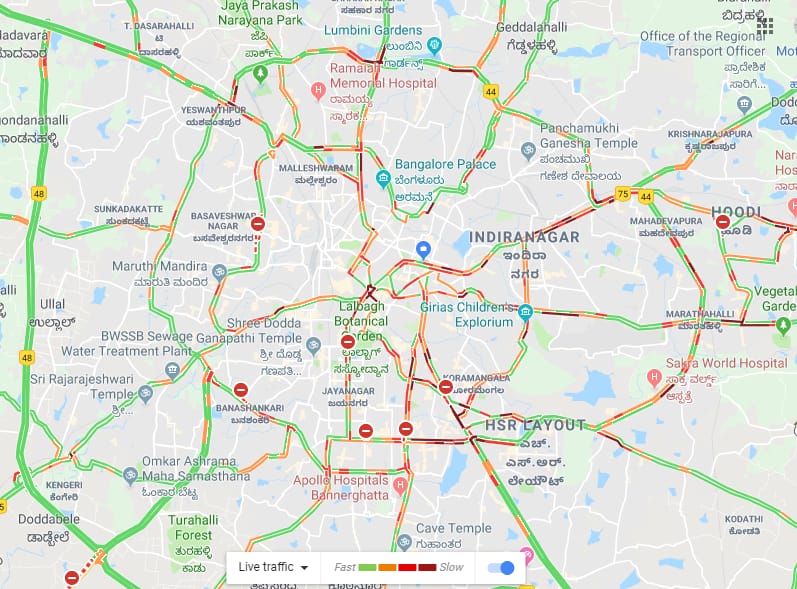 Bangalore weather at 10 am: 34-degree celsius 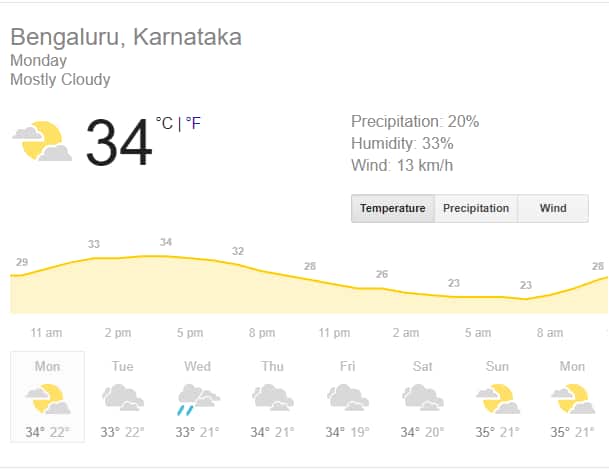 According to TV reports, a fire broke out at an automobile shop at Subramanyanagar in North Bangalore. Firefighters rush to the spot. Fire suspected due to short circuit.

3 arrested at Bangalore airport with 1.5 kg of gold paste mix hidden in rectum 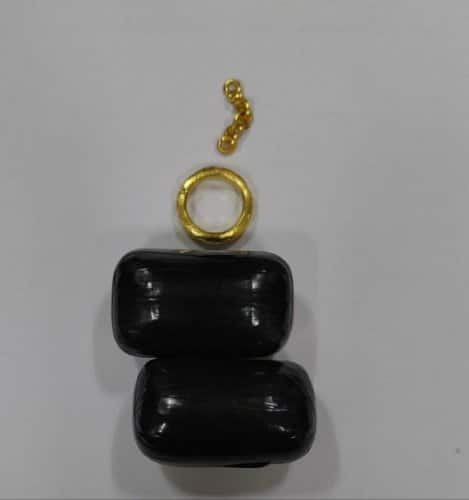 Rain likely in Bengaluru due to “Fani”

According to Indian Meteorological Department several parts of interior Karnataka, including Bengaluru, and isolated places in coastal Karnataka, may receive rain or thundershowers over the next few days due to Cyclone Fani.

A sanitation worker with the Bruhath Bengaluru Mahanagara Palike(BBMP) was killed after a speeding canter knocked her down while she was sweeping the road near JP Nagar.

Karnataka Police Friday night arrested a truck driver for making a hoax call to the police control room claiming a pre-planned terror attack on major Indian cities. Swamy Sundar Murthy was taken into custody by the Karnataka Central Crime Branch (CCB) after he claimed that a terror attack had been planned in the states of Tamil Nadu, Karnataka, Andhra Pradesh, Kerala, Telangana, Puducherry, Goa and Maharashtra.

The demand for a cabinet minister to take over the primary and secondary education portfolio in Karnataka is not something that has come out recently. Ever since N. Mahesh, the lone Bahujan Samaj Party (BSP) minister in the Congress-JD(S) coalition government, resigned last October, several activists and education experts have sought for an urgent replacement.