🔴 The man in his early 20s was nabbed when he climbed the gold railing around the sanctum sanctorum where the Guru Granth Sahib is placed and picked up the Siri Sahib (sword) when the evening prayer was being recited. 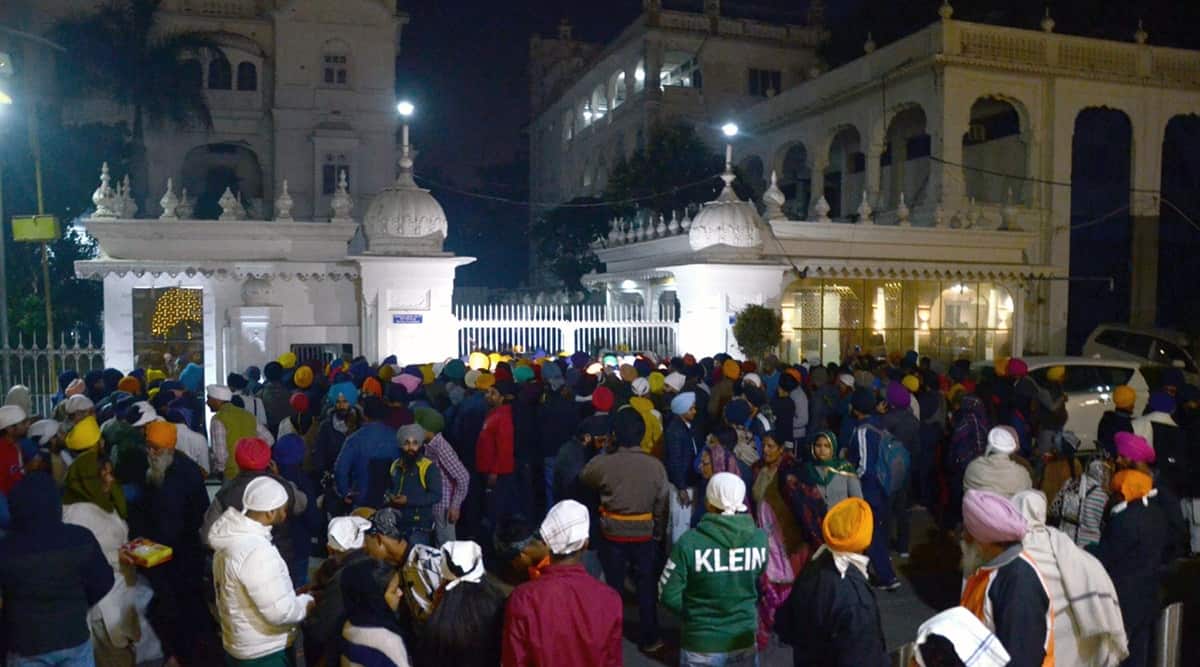 Crowd outside the gate of Teja Singh Samundri Hall, the headquarters of the SGPC. (Express photo by Rana Simranjit Singh)

A youth was beaten to death Saturday at the Golden Temple in Amritsar after being accused of a sacrilege attempt.

The man in his 20s, not yet identified, was caught by staff of the Shiromani Gurudwara Parbandhak Committee and devotees at the Darbar Sahib.

His body was later placed outside the main gate of the SGPC headquarters.

Calling it a matter of “great sorrow”, SGPC chief Harjinder Singh Dhami said: “During the recitation of Sodar Rehraas Sahib (evening prayers) today, a man jumped over the safety grill and entered the sanctum sanctorum and picked up the sword kept in front of Sri Guru Granth Sahib, but he was apprehended by the sewadars on duty, and died due to beating by the sangat (devotees).”

DCP Parminder Singh Bhandal said: “The unidentified man was thrashed before he was brought to the SGPC headquarters. It is matter of investigation how he died.” Cutting across party lines, leaders condemned the attempted sacrilege and called for a thorough probe.

Punjab Chief Minister Charanjit Singh Channi, the CMO said, “strongly condemned the most unfortunate and heinous act to attempt sacrilege of Sri Guru Granth Sahib in the sanctum sanctorum”.
It said the CM directed the state police to thoroughly probe the entire matter to zero-in on the “motive” and “conspirators”.

He also spoke to the SGPC president and assured his government’s full support and cooperation to get to the bottom of the case.

The incident took place at 5.50 pm and was captured on camera because the Rehraas Sahib is telecast live by a private channel. Later, the SGPC released CCTV footage of the incident.

According to sources, the youth was first questioned in a room inside the Golden Temple premises, and then taken on a wheel chair to the SGPC headquarters. All this while, he was being beaten. Meanwhile, police also reached the spot.

Sources said police officers and SGPC staff questioned the youth but he did not reveal any about himself. He was not carrying any identity card, sources said.

Meanwhile, some Sikh activists and devotees sat on a dharna, demanding custody of the youth. The SGPC later placed his body outside its headquarters.

SGPC sewadars apprehended the man and handed him over to police. He was identified as Ranbir Singh. Following this, SGPC chief Dhami said: “This is not a stray incident. It is a conspiracy hatched to provoke the sentiments of Sikhs and vitiate the atmosphere of Punjab.”

Akal Takht Jathedar Giani Harpreet Singh, in a statement, said: “History tells us that the Sikhs never tolerated any kind of attack on Sri Harmandir Sahib, even when powerful foreign invaders did so. They always gave them a befitting reply. There are some agencies which are behind these incidents in the season of elections.”

“If any such incident happens anywhere and the sangat punishes the culprit on its own, the government or the culprit will be responsible for it. The government must expose the forces behind these conspiracies because Sikhs will not tolerate these acts anymore,” he said.

Punjab BJP president Ashwani Sharma condemned the Golden Temple incident and slammed the Congress government over its alleged failure to act in cases of sacrilege. He called for a probe into the Saturday incident.

In a video address, Shiromani Akali Dal patron and former Chief Minister Parkash Singh Badal said: “It’s unbelievable that such a painful and brazen crime is committed at ‘the holiest shrine of humanity’ by a single individual. The possibility of deep-rooted conspiracy cannot be ruled out. This needs to be probed.”

Attempts at sacrilege have been a sensitive issue in Punjab. Such incidents during the Akali-BJP rule led to the rout of the SAD in the 2017 Assembly polls.

The matter has been gaining traction in the last few months with Congress state chief Navjot Singh Sidhu raising it to target Captain Amarinder Singh who, until recently, was Chief Minister.

Sidhu even resigned briefly in protest against the appointment of former Advocate General APS Deol by Chief Minister Charanjit Singh Channi, saying Deol had represented Sumedh Singh Saini who was DGP during the alleged sacrilege incidents.

Explained: Polls & pressure
Sacrilege attempts have been a very emotive issue in Punjab and the SAD paid a heavy price at the hustings in 2017 for its perceived failure to get to the bottom of such incidents. Now, as the state gears for Assembly elections, political parties will be hard pressed to take a stand on this issue.