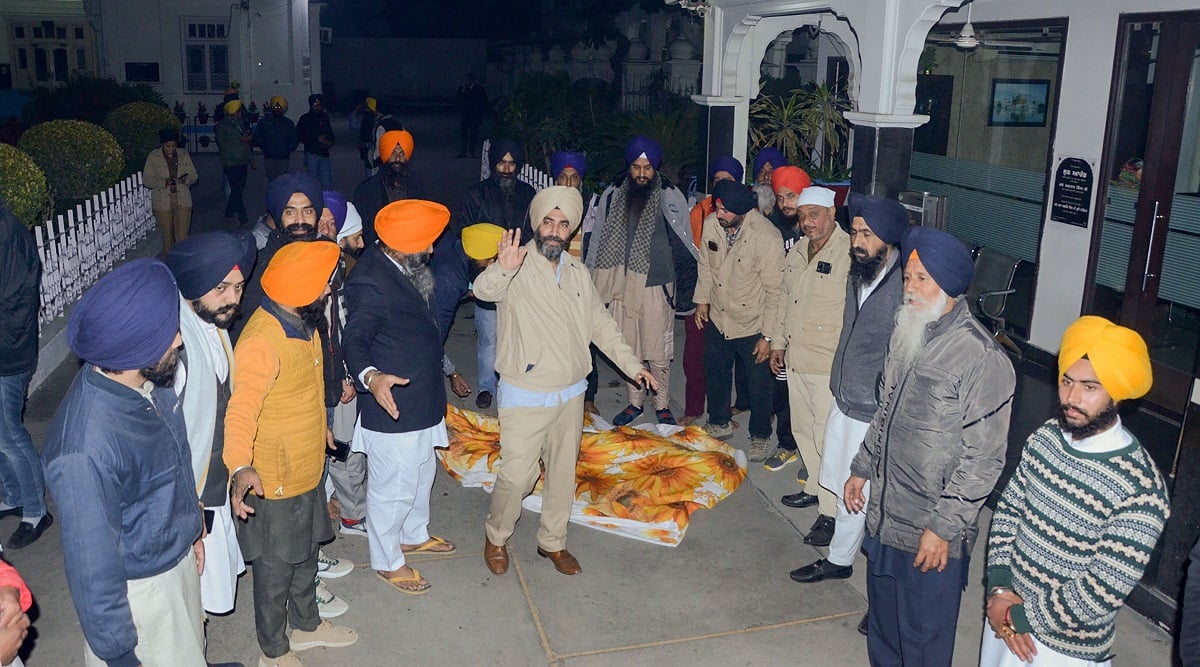 Activists of various Sikh organisations gather outside the Golden Temple after a man was beaten to death at the temple premises for alleged sacrilege. (PTI)

The police have booked the youth who was beaten to death Saturday at the Golden Temple in Amritsar under sacrilege and attempt to murder charges.

The 20-year-old was caught by the staff of the Shiromani Gurudwara Parbandhak Committee and devotees at the Darbar Sahib on Saturday after an alleged sacrilege attempt. His body was later placed outside the main gate of the SGPC headquarters.

The police have registered a case against the deceased youth based on the statement of Shiromani Gurdwara Parbandhak Committee (SGPC) staff Sucha Singh. The SGPC staff alleged that the youth picked up a sword kept in front of the Guru Granth Sahib and also touched the Rumalas (holy cloth to cover the Guru Granth Sahib) with his feet. The incident was broadcast live and also captured by CCTV cameras. The youth, who was in his early twenties, has been booked under Sections 295A and 307 of the Indian Penal Code at the Division E police station of Police Commissionerate Amritsar.

Punjab Deputy Chief Minister Sukhjinder Singh Randhawa reached Amritsar on Sunday morning and said that the youth has not been identified yet.

Randhawa said, “The accused had entered the premises of Sri Harmandir Sahib (Golden Temple) at around 11:40am on Saturday.” He allegedly committed sacrilege at 5:50 pm.

“The accused slept outside the Akal Takht Sahib during his stay inside the Golden Temple premises, before committing the sacrilege. There must be something behind this incident. His death has made it difficult to attain information regarding the conspiracy but we will still investigate the matter. So far, he has remained unidentified. We have been trying to retrace his movement in Amritsar. He entered the Golden Temple alone,” said the home minister.

Randhawa added, “It seems he had come with a target to pick up the sword. But the SGPC staff immediately caught him. But there is a sequence. First, sacrilege was reported at the Anandpur Sahib (on September 13). Then there was another incident at the Golden Temple on Wednesday. It is very painful. Incidentally, a drone was also captured along the India-Pakistan border on Saturday.

“As a precautionary measure, I have asked the police and the SGPC to check if CCTV cameras are working at the Gurdwaras. We also need to install CCTV cameras in all Gurdwaras.”

Terming the alleged sacrilege bid as a “most unfortunate” incident, Randhawa said that a Special Investigation Team (SIT) has been constituted under DCP (Law & Order). The SIT would submit its investigation report within two-days, he added.

Randhawa also spoke to Jathedar Sri Akal Takht Sahib and SGPC president. He also said that the CCTV footages from markets adjoining the Sri Darbar Sahib were also being scanned to find out which way the accused came from and if there was anyone accompanying him. “The state government along with the SGPC will probe the incident,” said Randhwa.

Answering a query, Randhawa said that Punjab Police cannot enter the Sri Darbar Sahib without permission from the SGPC.

He also said that the Punjab Vidhan Sabha had passed a resolution in 2018 to amend Section 298 into 295-A, but so far no action had been taken by the Centre. He said that under Section 295-A, there is a provision for sending offenders to prison for 10 years if they are found guilty of sacrilege. The state government will send a letter to the Centre seeking approval of Section 295-A, he said.

“Punjabis will tackle such attempts with communal harmony. Punjab’s peace and harmony would be maintained at all cost,” said Randhawa while issuing directions to DGP, all commissioners of police and SSPs to strengthen round-the-clock security measures near all religious places.

He further said that CCTVs should be functional in the complexes which house the Guru Granth Sahib and other religious scriptures. He also said that the police should coordinate with SGPC and all gurudwaras committees to ensure that the Guru Granth Saab is not left unattended at any time.