The NGT order had stated that of paramount importance in the ecology of the Vishwamitri is the presence of the highly protected species, the Indian crocodile (Crocodylus palustris- Mugger Crocodile) and Turtles. 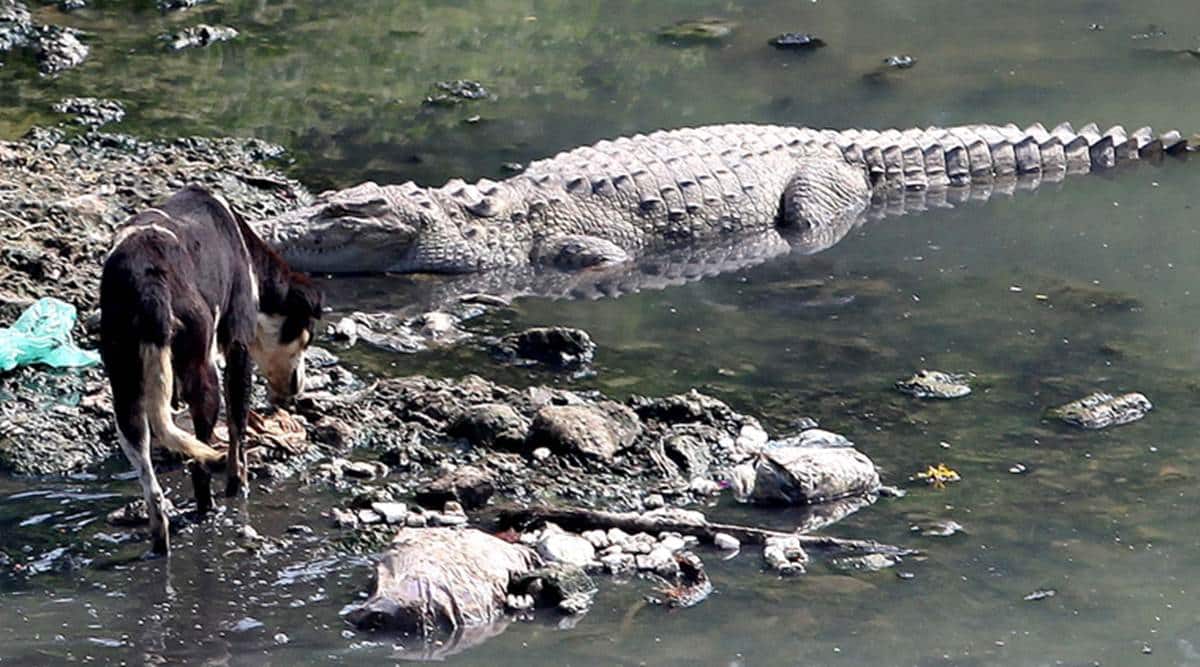 A mugger crocodile on the Vishwamitri riverbank in Vadodara. (Express Photo by Bhupendra Rana/Archive)

A group of Vadodara activists on Saturday called the Vadodara Municipal Corporation (VMC)’s pre-monsoon clean-up activity of the Vishwamitri River “destructive” and expressed concerns that the VMC had not implemented the May 2021 order of the National Green Tribunal that issued specific directions for the restoration of the river.

In a letter to authorities including the municipal commissioner, Vadodara mayor, Ministry of Jal Shakti, Ministry of Environment, Forests and Climate Change, Chairman of Central Pollution Control Board, Chief Secretary of Gujarat, State Environment Impact Assessment Authority and Gujarat Pollution Control Board, the activists seeks to immediately stop the cleanup and comply with the NGT order of May 25 this year.

The conservationists, in their letter, have cited a July 15 meeting with the mayor, Municipal Commissioner, Deputy Mayor, Standing Committee Chairperson, and other VMC officials in the context of the clean-up activity of Vishwamitri. Rohit Prajapati of the Paryavaran Suraksha Samiti said, “The NGT order dated May 25, 2021 had specifically laid down action to be taken by the VMC. The current activity of using heavy machinery (JCB etc.) has caused severely destructive damage to the Vishwamitri River and its environs. The significant wild flora and fauna, including Scheduled I species like the Mugger and the turtle, and innumerable other amphibians, reptiles, birds, insects, and microscopic organisms are found in the Vishwamitri River habitats. We have individually and collectively visited the location of the ongoing works on July 12, 13 and 14 to gauge the nature of the work being carried out by the VMC. Prima facie, it appears as an effort towards the resectioning of the river resulting in further encroachment on the river section through the dispersal and levelling of the soil; the debris and solid waste still remain. “

“Though the VMC contends that they have been guided by the Gujarat State Forest Department, Gujarat Pollution Control Board, and other authorities, we believe that these activities are in violation of the various Orders, directions, and Acts, specifically ‘The Wild Life (Protection) Act, 1972’ and the NGT Order dated 25.05.2021,”the letter further said.

The NGT order had stated that of paramount importance in the ecology of the Vishwamitri is the presence of the highly protected species, the Indian crocodile (Crocodylus palustris- Mugger Crocodile) and Turtles. “This species is categorized as nationally ‘vulnerable’, subsequent to an assessment following IUCN criteria for threatened species (Molur and Walker 1998) and has the highest legal protection in India. It is listed in Schedule I to the Indian Wildlife (Protection) Act, 1972… Any activity against the survival of the highly protected species, without approval by the State Wildlife Board/National Wildlife Board and the Government of India is illegal,” the order had stated.

Prajapati said that the NGT had asked the VMC to come up with a River Restoration Plan. “This would include mapping scientifically and accurately the locations and extent of areas of solid waste (including construction debris) dumping, untreated and ill-treated sewage disposal, waterlogged and flooded areas within the watershed, including the entire stretch of the river along with its tributaries and associated ravines and wetlands. To employ genuine, scientifically, and technically correct, well-coordinated, measurable, time-bound, accountable, and participatory steps for the clean-up operations and follow the Wild Life (Protection) Act, 1972,” Prajapati said.

The NGT order had directed the VMC to demarcate the entire flood plain zone of the river and implementation of the “Vishwamitri River Action Plan”, including the steps for removal of unauthorized structures, demarcation and protection of flood plain zone and other action points as per the river restoration plan.

Prajapati said, “During our meeting with the mayor and other officials on July 15, we expressed our concerns to stop the ongoing destructive activity… The need is to work out a more systematic way to deal with river flow, inundation, water-logging, habitat integrity and protection, and other issues related to the river.”

A senior official of the VMC said that the pre monsoon-work being carried out was as every year and the civic body had already initiated the work to plan a detailed restoration of the river shortly.