According to an RTI query, the DE machinery has negligible contribution to the NOTA campaign. 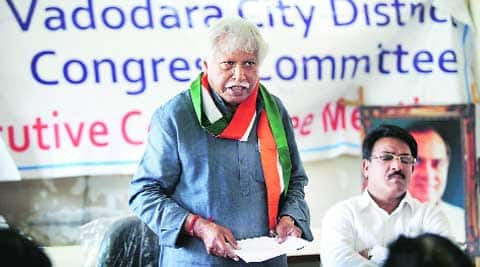 Madhusudan Mistry during the campaign for the Lok Sabha election in Vadodara.

During the recently concluded Lok Sabha polls in Vadodara, None of the Above (NOTA) may have grabbed the third spot after Narendra Modi and Congress’s Madhusudan Mistry, but going by a reply to an RTI query, the District Election machinery has almost negligible contribution to the NOTA campaign, despite a Supreme Court guideline directing the election machinery to carry out such campaigns.

Although the election machinery in Vadodara went all out to with its “maximum voter turnout” campaign for the polls conducted on April 30, the District Election Office (DEO) admitted that it had carried out “no awareness campaign for NOTA on state expenditure”. In reply to an RTI query earlier this week, the District Election Office stated, “No NOTA awareness campaign was carried out in Vadodara district on state expenditure. No information in this regard can, therefore, be provided.”

The activists, who submitted the RTI request, had themselves campaigned for NOTA in April. They say that the machinery failed to comply with the SC guidelines, on purpose.

Activist Atul Sabhai Gamechi said, “The DEO was responsible for carrying out awareness campaigns, printing pamphlets, posters and hoardings for publicity of NOTA. However, in its zeal to make Narendra Modi the winner by a grand margin, the DEO granted permissions for campaigns that only stressed on the need to exercise franchise. No communication material or even a single hoarding with information on NOTA was put up in the constituency. In the RTI reply, the officers handed over cuttings of newspapers to us where our group is seen campaigning for NOTA as the campaign by the DEO.”

When contacted, Deputy DEO and Information Officer, Rajendra Sarvaiyya claimed that the department’s reply only explained that no state expenditure was incurred for the NOTA campaign. “We have handed over copies of press notes issued from time to time to newspapers for NOTA-related information. We had regularly issued NOTA information to newspapers during the elections,” Sarvaiyya said.

However, Gamechi maintained that the NOTA campaign can’t be held without state expenditure and the fact that the election machinery has no information on campaigns to show, where expenditures were incurred, only goes to say that no campaign was undertaken.

According to an SC guideline issued on September 27, 2013, the Election Commission of India (ECI) was directed to provide a NOTA option on the EVM and ballot papers, so that electors who do not want to vote for any of the candidates in the fray can exercise their option in secrecy. Later, the apex court also made the District machinery and State Election Commissions responsible for the NOTA awareness campaign.