The move comes after the Adani Group was targeted on social media in the wake of the recovery of nearly 3,000 kg of heroin by the DRI from two containers at Mundra port on September 16 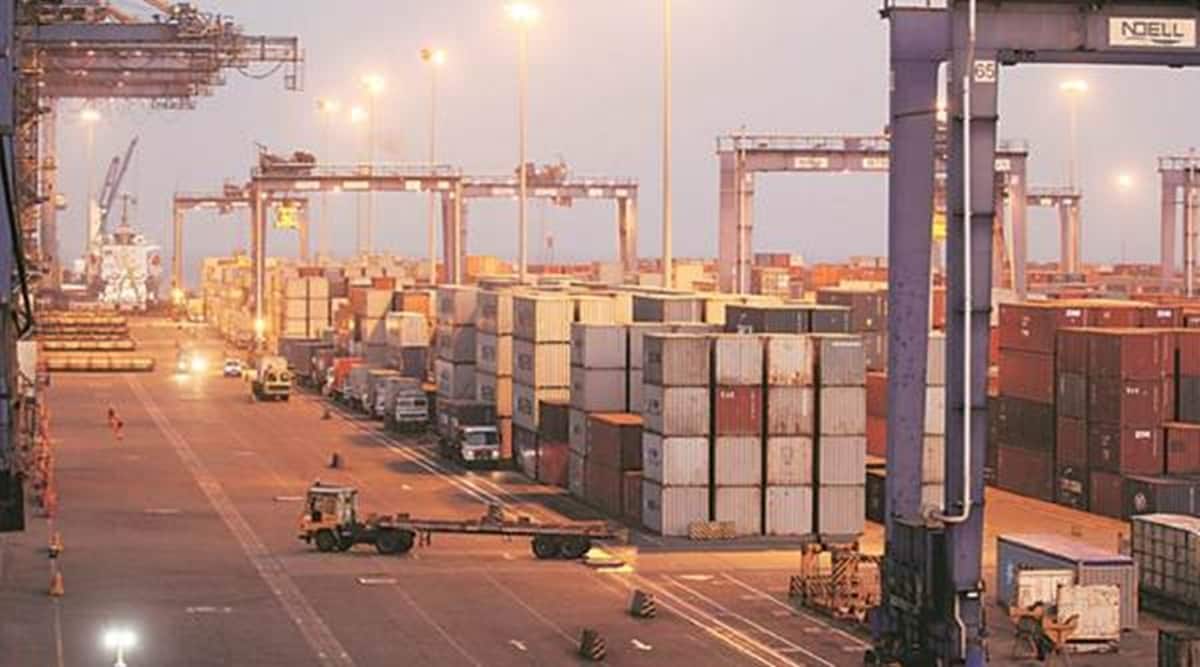 Almost a month after nearly 3,000 kg of heroin was seized from two containers at its Mundra port in Kutch in one of the biggest such hauls ever in the country, Adani Ports and Special Economic Zone (APSEZ) Monday issued a trade advisory stating that from next month, it will not handle any container cargo originating from Iran, Pakistan and Afghanistan.

“Please be informed that with effect from November 15, 2021, APSEZ will not handle EXIM containerised cargo originating from Iran, Pakistan and Afghanistan. This trade advisor will apply to all terminals operated by APSEZ and including third party terminals at any APSEZ port till further notice,” stated the advisory signed by Chief Executive Officer Subrat Tripathy.

Sources told The Indian Express that exporters are likely to approach the Government over the impact of the move on the cost of exports, particularly to Iran.

Ajay Sahai, Director General and CEO of the Federation of Indian Export Organisations (FIEO), said the decision would force many exporters to send their merchandise through other ports. “For trade, this will be a setback as the cost of shipment will go up. A lot of North Indian exporters use the Mundra port,” he said.

According to Sahai, the cost of transporting a 20-foot container from Rajkot to Mundra was about Rs 13,000-15,000, and that of a similar load from Rajkot to the Jawaharlal Nehru Port Trust at Navi Mumbai about Rs 60,000.

When contacted, APSEZ did not provide details of the amount of container cargo that comes to the company’s terminals in India from these three countries.

But according to trade sources, some of the key imports from Iran to Mundra, India’s largest commercial port and one of the biggest handlers of containerised cargo, are fruits and nuts, including pistachios, dates and almonds, and raw wool as well as organic and inorganic chemicals. India’s total imports from Iran in FY20 were $1,397 million.

Fruits and nuts are also among key imports arriving at the port from Afghanistan with Indian companies importing figs, dates, melon seeds and raisins. India’s total imports from Afghanistan in FY20 were $435 million. Experts said the depreciation of Afghanistan’s currency in the wake of the regime change had already led to trade with the country falling dramatically.

Key imports to the port from Pakistan include rock salt and dates. Total imports from Pakistan to India in FY20 were only about $14 million.

India’s exports to Iran were about $3,374 million in FY20 including agricultural products such as cereals, tea, coffee and spices as well as organic chemicals essential oil and other chemicals.

The heroin was seized on September 16 by the Directorate of Revenue Intelligence (DRI) from two containers that were declared as containing “semi-processed talc stones”. The cargo had landed from Afghanistan via Iran’s Bandar Abbas port, and was in the name of a trading company based at Vijayawada in Andhra Pradesh.

Five days later, the Adani Group company said: “APSEZ is a port operator providing services to shipping lines. We have no policing authority over the containers or the millions of tonnes of cargo that pass through the terminal in Mundra or any of our ports.”

On September 23, The Indian Express reported that the Andhra firm, which was registered as the official recipient of the two containers in which the 2,988 kg of heroin valued at some Rs 21,000 crore was found, had imported a similar consignment from the same Afghanistan company in June.

Days later, a special court for Narcotics Drugs and Psychotropic Substances (NDPS) in Bhuj directed the DRI to investigate if the “Mundra Adani Port, its management and its authority gained any benefits” from import of the heroin that was seized.

On October 6, the case was transferred to the National Investigation Agency (NIA).

The Adani Group company has about 13 ports and terminals in India, including the largest commercial port at Mundra. It handles container cargo at Mundra and Hazira in Gujarat; Vizhinjam in Kerala; Kattupalli and Ennore (terminal) in Tamil Nadu; Dighi in Maharashtra; and Krishnapatnam in Andhra.