On Sunday, the family of Pratap Singh Jadeja (30) —Pratap’s two children, his wife who was pregnant with their third child, his sister-in-law, Pratap’s brother Pradyuman's wife and two children — had gone to the temple of goddess Meldi in Morbi. 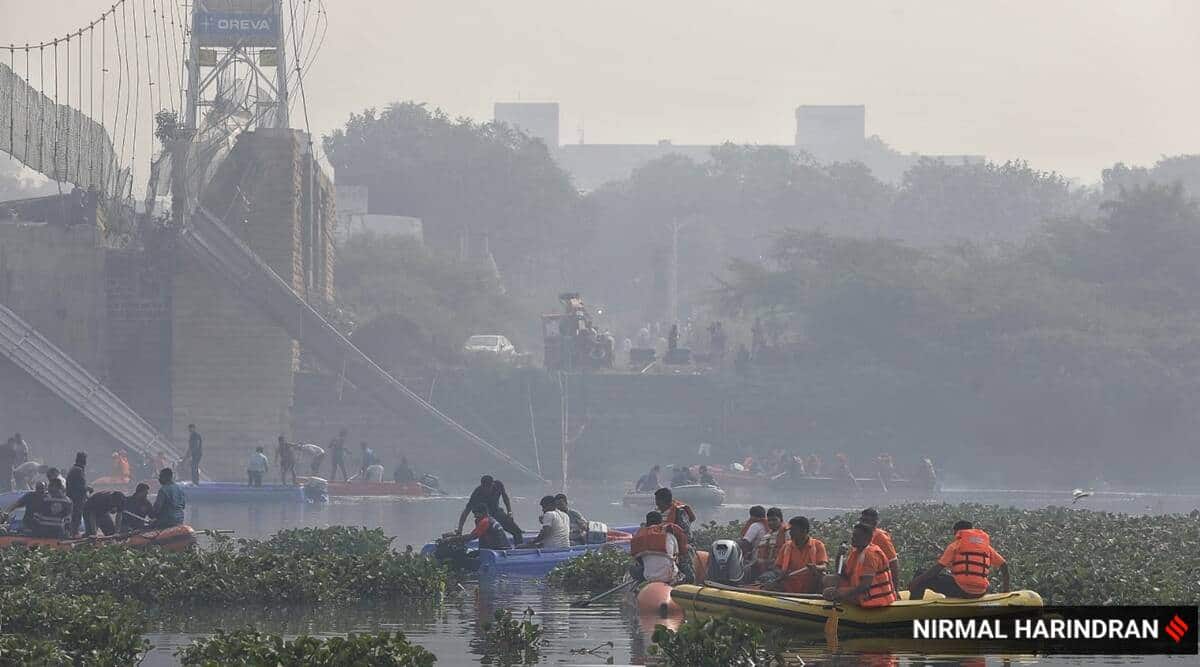 There are many others who had a seemingly providential escape. (Express Photo by Nirmal Harindran)

It was a detour the children insisted on — an outing at the end of a temple visit — but one that went horribly wrong for the Jadeja family, ending in the death of seven members, including four children and a nine-month pregnant woman.

On Sunday, the family of Pratap Singh Jadeja (30) —Pratap’s two children, his wife who was pregnant with their third child, his sister-in-law, Pratap’s brother Pradyuman’s wife and two children — had gone to the temple of goddess Meldi in Morbi. On their way back, the children insisted on going to the Jhoolto Pul, a century-old suspension bridge over the Machchhu river that had reopened only four days ago after being shut for repairs for about seven months.

Search and rescue on Monday at the site of the bridge collapse in Morbi. (Express Photo by Nirmal Harindran)

Hours later, as the bridge heaving with people gave way, all seven members of the family plunged into the river, and died.

“Since Pratap and Pradyuman were at work, they didn’t join their wives and children. They are now the only survivors in their family,” says Kanak Sinh, a relative of the Jadejas. While the family hails from Jalia village of Jamnagar district, the brothers had been living in Sanala in Morbi on rent for the last six years.

Waiting outside the burial ground in Morbi, 52-year-old Taiyab Sumra recounts the tragic story of his brother- in-law’s family. The brother-in -law lost his 30-year-old son and two grandchildren — a 5-year-old granddaughter and a 7-year-old grandson — in the bridge collapse on Sunday.

There are many others who had a seemingly providential escape.

Seven-year-old Nandan Chauhan had been waiting for the weekend to visit the jhoolta pul. He now lay in the ICU of the Krishna Multispeciality hospital in Morbi, his fractured right hand in a cast, and too traumatised to speak. Nandan’s mother is nursing his father, who, too, fractured his arm and has been admitted to the nearby Nakshatra Hospital.

Read in Explained |Suspension bridges: how they work

Sitting by Nandan’s bed, his uncle Suresh Tatamiya, who runs a marble business in Morbi, says, “They entered the bridge from the western gate and had almost reached the eastern end of the bridge, when it collapsed. They fell on the muddy banks of the river. By the grace of God, they all escaped and were rescued by 8.30 pm.”

Mehul Rawal, 40, who works in a ceramic factory in Morbi, says he had gone to the bridge with eight of his family members. Luckily for him, all of them survived, though his sister-in-law and her child suffered injuries. “The bridge was unusually crowded. We had got on to the bridge from the Darbargadh side (on the west), and were halfway through when we felt that it was too crowded. So we turned around and had started walking when the bridge collapsed. That ensured we fell in the mud on the banks, otherwise we would have drowned,” says Rawal, his right hand in a cast.

Advertisement
Also Read |Morbi Bridge Collapse | Cold comfort as cheques are handed out: ‘What do I do with money?’

Rawal’s relative Nirav Vora, 41, says, “Most of the people were trapped under the bridge’s floor in the water or among the water hyacinths. Even until early Monday morning, parents were on the banks of the river, carrying photos of their children on their phones and searching for them.”

Dr Manoj Kaila, administrator at Krishna Multispeciality Hospital, one of the six hospitals in Morbi, including the Civil Hospital, where the injured were brought in, said, “Of the 11 people who were brought here, five were children. Most of them had minor injuries and were discharged soon after. The survivors are mostly those who fell on the banks. Those who fell into the water were observed by doctors at the site and referred to the Morbi Civil Hospital.