According to sources, senior representatives of the Sangh and its affiliates met with Education Minister Jitu Vaghani, senior officials of the department and the organisational general secretary of Gujarat BJP Ratnakar in April to discuss the implementation of the new National Education Policy (NEP). 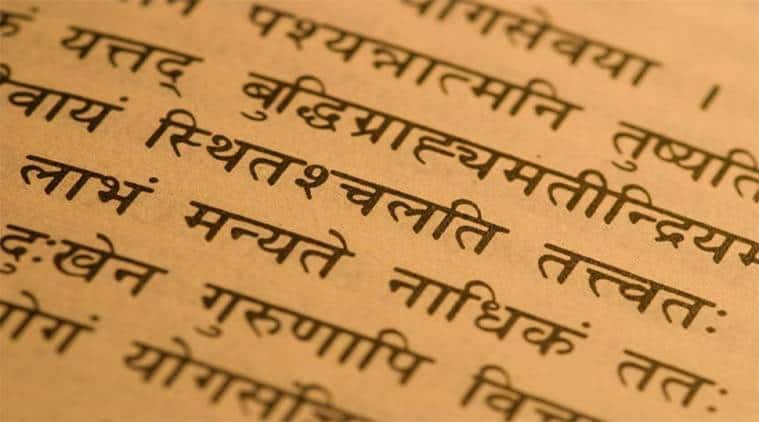 Interestingly, the three-language formula in the NEP 2020 doesn't prescribe any specific language to be compulsorily taught in school. (Representational)

The Rashtriya Swayamsevak Sangh (RSS) in Gujarat has made a strong pitch for teaching Sanskrit compulsorily from Class 1, at a meeting with the state government, The Indian Express has learnt.

According to sources, senior representatives of the Sangh and its affiliates met with Education Minister Jitu Vaghani, senior officials of the department and the organisational general secretary of Gujarat BJP Ratnakar in April to discuss the implementation of the new National Education Policy (NEP).

Sanskrit teaching was the main thrust of nearly 20 representatives of the RSS affiliate organisations, including Vidya Bharati, Shaishik Mahasangh, Samskrita Bharati, Bhartiya Shikshan Mandal, in the meeting with Vaghani who was accompanied by nearly 25 senior government representatives. The Sangh also pitched for giving Bhagvad Gita, Ramayan and Mahabharat a place in the school curriculum, making Vedic maths compulsory, offering value education based on Upanishad and Vedas, and regulating private universities.

In its presentation during the meeting, the RSS is learnt to have asked the state government to allocate at least six periods in a week for Sanskrit. The presentation on NEP implementation, a copy of which is with The Indian Express, speaks of giving “special preference” to Sanskrit in the NEP’s three language formula and that schools should “teach best English but not at the cost of Indian languages” in primary classes.

Interestingly, the three-language formula in the NEP 2020 doesn’t prescribe any specific language to be compulsorily taught in school. “The three languages learned by children will be the choices of states, regions, and of course the students themselves, so long as at least two of the three languages are native to India,” the policy says.

Asked why the RSS is pushing Sanskrit under the three-language formula even though the NEP doesn’t prescribe, Himanjay Paliwal of the RSS affiliate Samskrita Bharati told The Indian Express, “…the NEP speaks gol gol (unclear) about Sanskrit. It is not clear whether the NEP is in favour of the language or against it. Is par koi spashtata nahi hai (there is no clarity on this).” Paliwal is Samskrita Bharati’s Gujarat sangathan mantri.

He added, “English is being taught compulsorily in schools even though the NEP says no language will be forced on students. For teaching Sanskrit from Class 1, paramarsh (consultation) is being done at all levels with the state government… the NEP has laid down the formula. Now, how the formula will be explained and interpreted is up to the government.”

However, the RSS’ suggestion on the study of Sanskrit is not limited to school education. The Sangh has suggested that in secondary and higher secondary education, Gujarati should be taught as the first language, Sanskrit as second and the government can decide which should be offered as a third language option. Moreover, students who do not study Sanskrit in Classes 11 and 12 should be barred from taking admission in BAMS (Bachelor of Ayurvedic Medicine and Surgery) programmes, it has told the state government.

According to sources, a follow-up meeting between the RSS and the state government on the implementation of the NEP is expected in July.

On the implementation of the RSS’ suggestions, Vaghani said, “We have been receiving several suggestions. The government will work on the feasibility and these will be implemented accordingly.”

The Gujarat government, over the last three years has launched schemes to promote learning of Sanskrit. For instance, it started the Gujarat Sanskrit Education Board in 2019.

— At all levels, Sanskrit to be taught in Sanskrit medium only.

— Steps to increase the number of open school students (at present 14 lakh are regular students and only 63,000 enrolled with open school)

— Class 10 students be given two options to attempt science subject on the lines of mathematics.

— Many schools have made separate classrooms for students who have taken admission under the RTE Act (Section 2 (1)c), which is encouraging social inequality. This should be controlled.