Cattle on roads, in courts in Gujarat as fund-less shelters let them loose 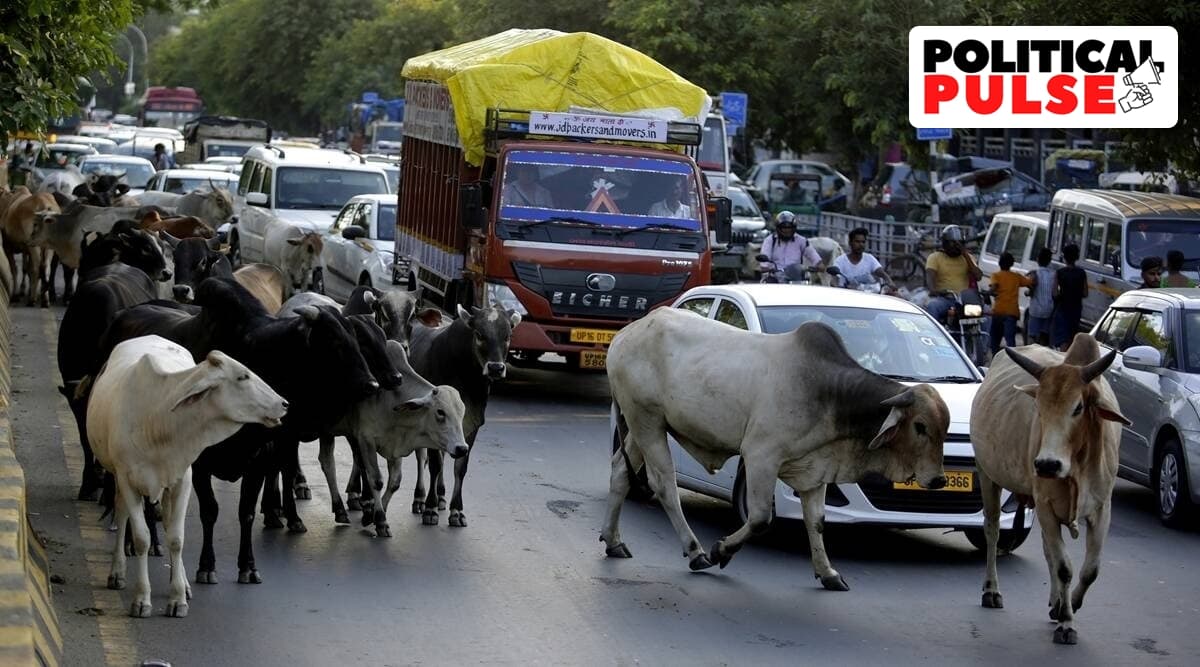 On Friday, cattle were let loose on the streets in the north Gujarat districts of Banaskantha and Patan. In Kutch, on Sunday, those running the shelters handed over keys to the government, saying they would not vote for the BJP in the elections. (File photo)

THE COWS are coming home – and how – in Gujarat. Angry at the government for not releasing funds to registered cattle pounds and shelters, the charitable trusts running them are setting them free, often into government buildings. By Sunday, nearly 1,750 cowsheds run by such trusts, housing over 4.5 lakh cattle, had joined the agitation.

Amid calls to boycott the ruling BJP in the coming Gujarat Assembly elections, videos went viral of cows in thousands entering government buildings like offices of the sub-divisional magistrate and courts, in the talukas of Banaskantha.

Opinion |The cow and the city: How Maldharis challenge Gujarat’s ideas of urbanisation

On Friday, cattle were let loose on the streets in the north Gujarat districts of Banaskantha and Patan. In Kutch, on Sunday, those running the shelters handed over keys to the government, saying they would not vote for the BJP in the elections.

Organisations The Indian Express spoke with said from Monday, similar agitations will be seen in the remaining Saurashtra and central districts of Gujarat.

They also claimed that while many cows are still on the roads and on government premises, a few have returned. The Gujarat Gau Seva Sangh, a conglomerate of several such cow shelters that house sick cattle or those which are past milking age, claimed almost 70 people from the three districts had been detained briefly over the protests.

Sources said worried BJP leaders from Banaskantha have reached Gandhinagar to discuss the issue with the state government.

Some protesters shared videos of Chief Minister Bhupendra Patel’s speech at a rally in Bhabhar of Banaskantha in March, where he said: “We are all gau bhakts. For gau mata, Rs 500 crore is allocated in the budget.” Patel, who promised to meet the demands of the trusts running the shelters, was accompanied by Banas Dairy chairman Shankar Chaudhary at the event.

The Rs 500 crore mention by the CM was a reference to the ‘Mukhyamantri Gau Mata Poshan Yojana’, under which Rs 30 is to be paid per cow and its progeny per day in the registered cow shelters of Gujarat.

With cattle taking over roads and government buildings, especially in Banaskantha – in some places for hours — it has been left largely to the harried police force to clear them. Policemen chased them out with lathis, tried to reason with the protesters, as well as put up barricades to try to prevent their movement.

Raghavji Patel, the Minister of Agriculture, Animal Husbandry and Cow Breeding, admitted the government was concerned about the protests and the underlying reason. “The CM sincerely wants that the issue should be resolved soon,” he told The Indian Express, adding that he had discussed the issue with BJP state president C R Paatil on Sunday.

Advertisement
Also from Express Opinion |Pratap Bhanu Mehta writes: From Leicester to New Jersey, the diaspora is reflecting the divisions of Indian politics

On the delay in release of the money to the shelters, Patel said, “We had made the provision in the budget and also announced its implementation from April 1, but due to administrative tangles, this could not be done. But as it is under consideration, there will be a positive solution in a day or two.”

The anger of the trusts is just the latest episode in the stray cattle menace that is turning into an intractable problem for the BJP government. In a major climbdown in the recent Assembly session, it cancelled a Bill on stray cattle to pacify the Maldhari community.

The government is also facing a contempt petition in the Gujarat High Court over wilful disobedience in implementing its order to control stray cattle and set up temporary cattle pounds.

Vipul Mali, the general secretary of the Gujarat Gau Seva Sangh, said: “We feel cheated. Despite promises made by the state government, the CM and several ministers, not a single paisa has been released till date. Meanwhile, donations have declined as people tell us why we need them when the government is giving Rs 500 crore.”

Mali added: “We have already declared that we will boycott the BJP as well as the elections. If the state government fails to meet our demands by September 30, we will launch a Gau Adhikar Yatra across the state.”

Advertisement
Don't Miss from Express Opinion |Reservation for Muslim, Christian SCs: Why a new commission when the old one was ignored

The Sangh announced on Sunday that the Yatra will be launched from Tharad in Banaskantha on October 1. “With a gau rath, hundreds of religious leaders and gau bhakts will join the yatra. It will be taken out in five zones, covering every village of each Assembly constituency, where people would take an oath to boycott the elections. Till the time funds are released, through the yatra, a protest campaign led by mahants would be held,” the Sangh said.

What has others worried is that the cattle protests coincide with the raging lumpy skin disease in Gujarat, among the worst-affected states. An estimated 1.69 lakh cattle have been affected by the disease in the state, with more than 5,800 deaths.

Minister Raghavji Patel played down the fear of the disease spreading, claiming “the cows under these gaushalas are not infected”. “Also, the disease in the state is completely under control,” he said.

Sources at the Centre, in the Union Ministry of Fisheries, Animal Husbandry and Dairying, said while they were not aware of the development, it was a cause for worry. If it is true, they will ask the state government why cattle have been allowed to roam free when guidelines restricting their movement are in place, a source said.

Mali said Gujarat was not the only state to announce financial assistance for stray cow shelters. “BJP-ruled states like Uttar Pradesh, Haryana, Madhya Pradesh, Uttarakhand are providing similar support. Even Congress-ruled Rajasthan is offering Rs 50 for one cow. So why has Gujarat failed to support cows?