A day after a coach of Sabarmati Express was set on fire killing 59 people, a group of mob gheraoed Gulberg Society and went on a killing spree. 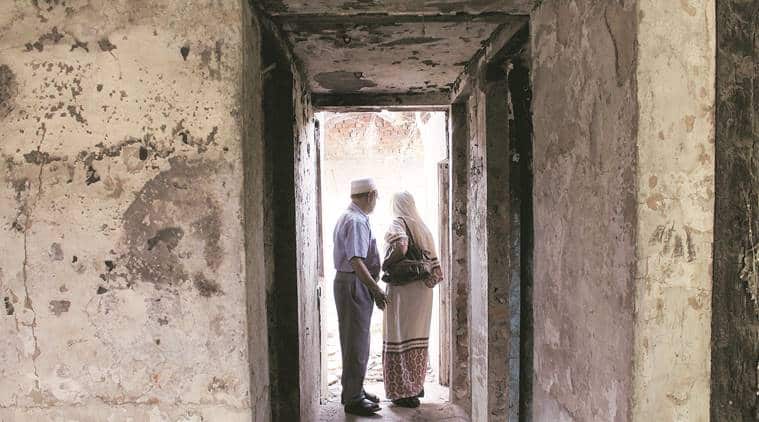 An elderly couple revisit their home at Gulberg Society in Ahmedabad on Wednesday. (Express Photo by Javed Raja)

Through the narrow lanes of Chamanpura, with residential societies and shops on either side, Gulberg stands out as a dilapidated and abandoned patch in an otherwise lively locality. Once a a posh Muslim society in Meghaninagar area of Ahmedabad, the sooted run down houses with stray dogs roaming around speak of its 16-year-old trial.

On February 28, 2002, a day after a coach of Sabarmati Express, which was packed with karsevaks returning from Ayodhya, was set on fire killing 59 people, a group of mob gheraoed Gulberg Society and went on a killing spree. Sixty-nine people were killed, including former Congress MP Ahsan Jafri.

Ramchandra Colony, on the lane opposite Gulberg Society, is home to Shivcharan alias Lallo Ramji Rai, one of the accused in the 2002 riots who was acquitted in 2016. People in his society refrain from acknowledging that they even know him remotely.

Bipin Patel, who was a BJP corporator in Ahmedabad Municipal Corporation during 2002 and one of the accused acquitted by the trial court, says: “I did not spend a lot of time in jail but I was affected mentally and my family suffered.”

Patel spent eight days in jail before being acquitted.

He went on to contest the municipal polls from Asarwa in 2015 and got elected. “It did affect my political career a bit because I was not able to devote time to my personal or political career,” he says, adding that being a corporator in 2002 helped him “extend help to Hindus who he says were falsely accused”. “I was worried about myself but I was also worried about the poor people who were dragged in, many people were falsely accused by the SIT and are now serving jail terms,” he adds.

In the Meghaninagar area close to the Civil Hospital and Gulberg Society, Atul Vaidya occupies a single room in this newly built three storey building where he practises Ayurveda. He had demolished his old clinic to set up this building after he was released on bail in June 2017.

Vaidya was among the 24 accused who were convicted in the case. He was convicted of mobilising and instigating the mob.

With the ground floor rented out to a small cafetaria, the flight of stairs take you to his clinic, where he is seated, waiting for his patients.

“No family wanted any relation with my family, and I was worried about the marriage prospects of my son and daughter. Now my son is married to a Kashmiri Pandit and my daughter has got engaged,” he says proudly showing photographs of his family.

He says he is also the chairman of International Commission for Development, an organisation working for protecting the interests of the socially and economically excluded people. He says he wishes to continue on these posts and do “good work for the nation at large”.

He claims he decided to quit VHP and the Bajrang Dal in 2007. Vaidya was the Gujarat Chief of the Bajrang Dal in 2002. “While I was with the Bajrang Dal, most of my friends were Muslims and they are still friends with me. They were the ones who cried the most when I was convicted in the case,” he adds, as he proudly shows a picture of him with Prime Minister Narendra Modi and says, “Can you recognise him?”