The 765-foot-long bridge, with a six-foot chainlinked safety fence, was closed to visitors for many months as Oreva undertook its renovation after signing the agreement on March 7 this year. 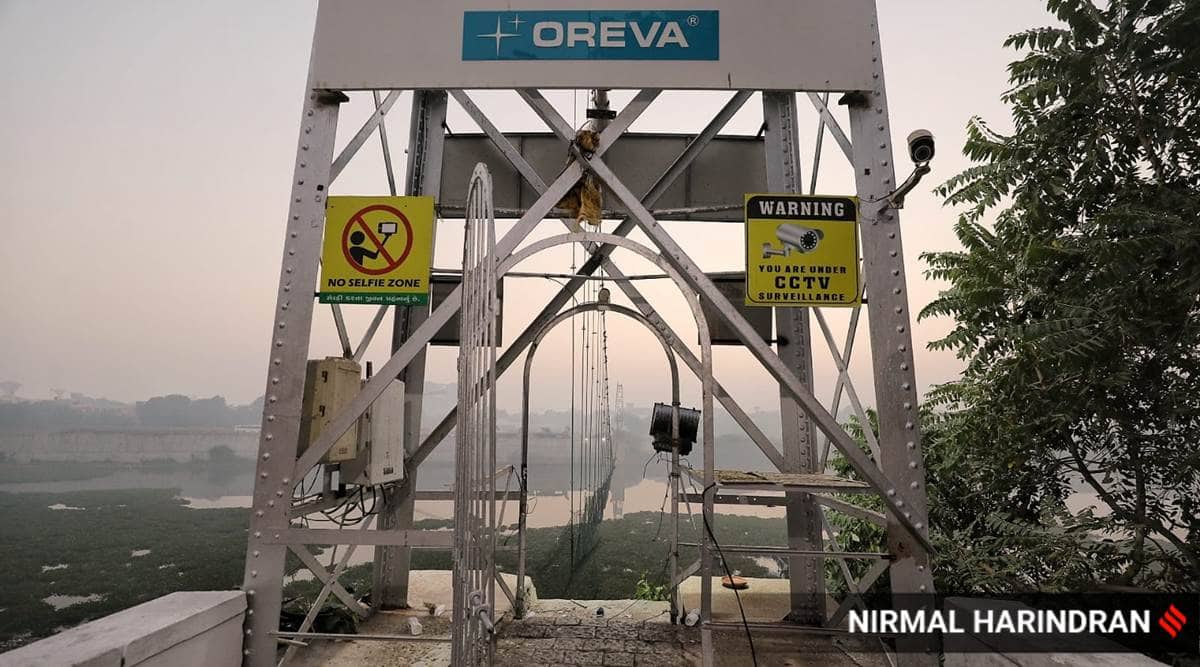 Oreva Group has been involved with the bridge since 2008.

With the police arresting two managers of the Oreva Group, under scrutiny is the agreement the Morbi Municipality signed with the company for the maintenance of the bridge that collapsed Sunday, killing at least 134 people. The company has been involved with the bridge since 2008.

As per the latest agreement signed by Ajanta Manufacturing Pvt Ltd, the flagship company of Oreva Group, the company, for a period of 15 years, was made solely responsible for themanagement of the bridge, including operations and maintenance (O&M), security, ticketing, cleaning and even staff deployment.

Only after 2027-28, the agreement says, will the company be allowed to raise ticket rates by Rs 2 per year. (Currently, adult ticket rate is Rs 15).

The 765-foot-long bridge, with a six-foot chainlinked safety fence, was closed to visitors for many months as Oreva undertook its renovation after signing the agreement on March 7 this year.

Subscriber Only Stories
View All
UPSC Key- January 30, 2023: Know about Project 39A, Beating Retreat Cerem...
UPSC Essentials | Key terms of the past week with MCQs
ExplainSpeaking: How to evaluate a Union Budget
Mahesh Vyas writes: Why the job shortage is for real
Apply New Year promo code SD25
Read |Only 15 people were allowed at a time on the bridge when it was built in 1887

According to the agreement, reviewed by The Indian Express, only one aspect of the operations was in consultation with the Morbi District Collector and the municipality: the price of tickets.

There is no reference in the agreement on the upper limit to the number of visitors allowed at one time. Oreva was allowed to do “commercial activity and branding” during the contract period.

Search and rescue on Monday at the site of the bridge collapse in Morbi. (Express photo by Nirmal Harindran)

Chief Officer of Morbi Municipality Sandeepsinh Zala had told The Indian Express on Sunday that the bridge didn’t have a fitness certificate because a safety audit could not be done. The reason, he said, was that the Oreva Group didn’t notify the municipality that it was reopening the bridge on October 26.

Asked if the municipality had issued any show-cause notice or ordered a ban on tourist entry for want of a fitness clearance, Zala said: “We didn’t have time. It was just two days ago. We had no chance (to take such action)”.

Said Kusum Parmar, president of the BJP-ruled municipality: “We had handed over the bridge entirely to Oreva and, therefore, ensuring safety of visitors was their responsibility… They had approached us for the agreement to maintain and operate the bridge.”

Search and rescue on Monday at the site of the bridge collapse in Morbi. (Express Photo by Nirmal Harindran)

The agreement categorically states that the “income-expenditure” for the bridge management would all be borne by Oreva and there would be “no interference by the governmental, non-governmental, nagarpalika (municipality) or, corporation or any other agency”.

Based in Morbi, Oreva, founded by Jaysukh Patel, one of the four sons of founder Odhavji Patel, is known as a clockmaker and is also into manufacturing of e-bikes. Repeated phone calls and text messages to managing director Jaysukh Patel didn’t elicit any response.

The company, which bore the entire expense for the repair, was given approximately eight to 10 months from the date of the agreement, to reopen the bridge after repair and renovation. The bridge, however, reopened within seven months of closing for the overhaul and was inaugurated by Jaysukh Patel.

According to a Morbi municipality publication dated 2010, there used to be a “law” permitting only 15 persons on the deck of the bridge at a time and it was in force until there was a railway workshop on the east bank of the river. However, the number of people killed and rescued suggest there were more than 300 on the deck when one of its steel cables snapped Sunday.

“When people walked on it, it swung so much that the user would have to be very careful. Only a limited number of persons were allowed on the bridge at a time and, therefore, a municipal fee of Re 1 was taken,” says the publication.

The bridge was handed over to the Morbi municipality when the civic body was formed in 1960-61. In the latest renovation, Oreva closed the old entrance to the bridge on its western end and instead created a new access passage through the ticket window itself.

As per a video of the inauguration, Jaysukh Patel is heard saying: “In the old days, technology was limited and so certain types of material had to be used, as we can see that this bridge was made of wooden planks… We gave our requirements and technical specifications to the company to develop the material”. He is heard saying that a firm in Dhrangadhra was awarded the contract for repairs after damage caused by the 2001 earthquake in 2007 and it was renovated “100 per cent at the cost of Rs 2 crore”.

The fabrication of the original bridge was done by the Mumbai-based engineering company Richardson and Cruddas, which was founded in 1858, with all material imported from England. Gujarat then was part of the Bombay Presidency.

Advertisement
People cling on to the collapsed suspension bridge in Morbi. The structure on the Machchhu river was a century old. (Express Photo)

Deepak Parekh, one of the managers of Oreva Group, had told The Indian Express on Sunday: “While we are waiting for more information, prima facie, the bridge collapsed as too many people in the mid-section of the bridge were trying to sway it from one way to the other.”

The Oreva Group also had the contract for managing the bridge between 2008 and 2018. It didn’t apply for renewal of the 2008 MoU over reported differences with the municipality over ticket rates. It wanted a hike of Rs 15 over the then adult ticket rate of Rs 10. So the renewal remained in limbo but municipality officers claim that Oreva Group continued to manage and maintain the bridge in the interim period of 2018 to 2022.

Sources say that after the state government officers intervened in the matter, the municipality agreed to increase the ticket price to Rs 15 for adults for the year 2022-23 and Oreva approached the municipality on June 3, 2020, proposing a fresh MoU for 15 years.

The general board of the municipality gave the green light to the Oreva proposal at its meeting on August 27, 2020, records show. Only after the pandemic — when the bridge remained closed — was the agreement for renovation and maintenance signed in March this year.