The document where Manish Bhardwaj, secretary, agriculture, farmers welfare and cooperation department, is a co-editor pointed out that there are 35 APMCs in Gujarat that "do not have any transaction at Mandi premises." 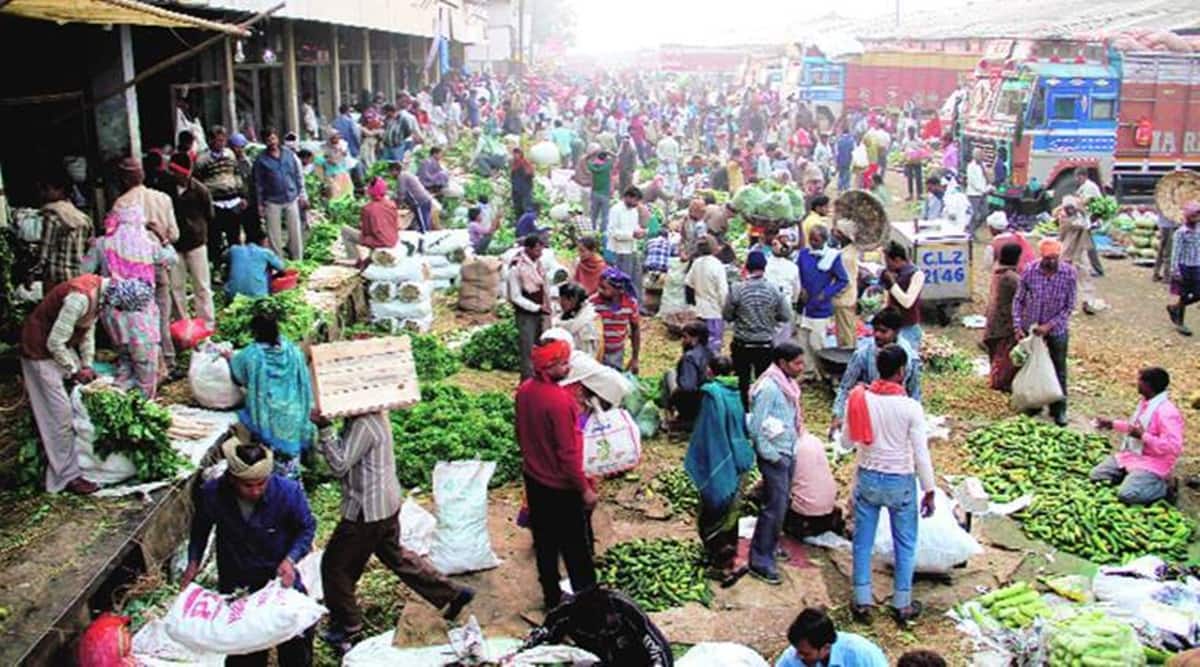 There are 224 APMCs in Gujarat where farmers can bring their produce and sell. (File Photo)

Unveiling a roadmap for the development of Gujarat’s agriculture sector by 2030, the state government has stated that 35 APMCs, that form 15 percent of the total APMCs, “require support” to become self reliant in the current market scenario.

The “Aatmanirbhar Farmers of Gujarat: Roadmap 2030”, a publication unveiled by Governor Acharya Devvrat at a pre-Vibrant Gujarat event at Anand Agricultural University (AAU) Tuesday, pointed out that 35 APMCs are “struggling” in Gujarat where the state government had amended the Gujarat Agricultural Produce Markets Act, 1963 in September 2020 accommodating private trade and allowing establishment of private APMCs in the state. Though modelled on central government’s Act, these amendments in Gujarat continue to be in force despite the Centre deciding to repeal three farm laws.

The document where Manish Bhardwaj, secretary, agriculture, farmers welfare and cooperation department, is a co-editor pointed out that there are 35 APMCs in Gujarat that “do not have any transaction at Mandi premises.”

There are 224 APMCs in Gujarat where farmers can bring their produce and sell. APMCs have recorded transactions of around Rs 37,000 crore where agricultural produce is sold through open auction.

This is just 26 per cent of the total value of agricultural production in Gujarat which is between Rs 1.4-1.5 lakh crore. While 78 per cent of the onion and 79 per cent of the spices make it to APMCs, the arrivals of crops like cotton and groundnut to APMCs are as low as 16 per cent and 14 per cent respectively.

The roadmap also listed out steps to make APMCs in Gujarat “self-sustainable and profitable”. It stated that both physical and digital infrastructure of APMCs will be developed to help them attract more farmers (sell their produce) and more buyers and traders (who can purchase the produce).

“To address the gap of warehousing capacity requirement and availability, APMCs are the best institutions. The Government of Gujarat has allocated Rs 100 crore to support development of warehouses at identified APMCs. Currently, 39 APMCs have submitted their proposals which will augment the capacity by around 2.27 lakh MT tonne,” the roadmap document said.

Apart from creating customised e-trading platforms, the state government also talks about creating a real-time agricultural market intelligence system that ensures timely collection and dissemination of production, availability and price information across the state. This will help farmers in Gujarat know the prevailing price and help them to decide whether to sell their produce or to hold and avail credit.