The expansion has given a boost to representation from the Saurashtra region where BJP did not fare well in the by-elections recently. 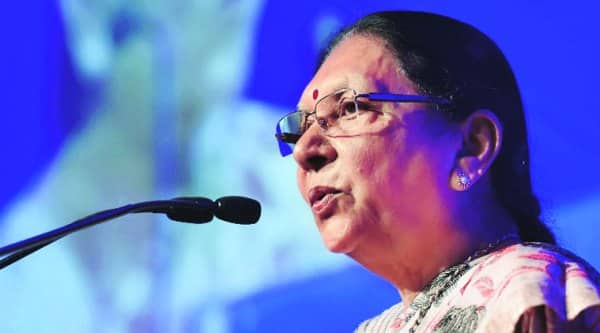 Gujarat Chief Minister Anandiben Patel inducted four new ministers into her government, taking the total ministry up to 24, including herself.

Governor O P Kohli administered the oath of office to Cabinet ministers Mangubhai Patel and newly elected MLA Vijay Rupani, besides ministers of state Parshottam Solanki and Jashabhai Barad at the Raj Bhavan on Wednesday. The expansion has given a boost to representation from the Saurashtra region where BJP did not fare well in the by-elections recently.

Patel, a tribal, represents Gandevi (ST) seat, Rupani, who is a first time minister in the Gujarat government is from Rajkot (West) seat, Koli strongman Solanki is from Bhavnagar (Rural) seat and Barad is from Somnath seat

VIJAY RUPANI
A former Rajya Sabha MP and state general secretary Vijay Rupani won his first assembly seat from Rajkot West, and was rewarded with a cabinet berth for his more than two-decade-old work for the BJP in Saurashtra, known as the BJP’s cradle. A Jain by caste, he won the Rajkot west by-election, which was necessitated following incumbent MLA and Gujarat assembly speaker Vajubhai Vala being appointed as Karnataka governor. Rupani has been been close to both Prime Minister Narendra Modi and BJP president Amit Shah. Modi also contested and won his first election from the same seat in 2002. Based in Rajkot, Rupani has played a role of Modi’s organizational man in Saurashtra region. Rupani is also the party’s spokesperson.

JASHA BARAD
A BJP rebel who participated in the rebellion led by Shankersinh Vaghela to topple the Keshubhai Patel government in 1996, Jasa Barad was back in the BJP fold only ahead of Lok Sabha 2014 elections. Karadiya by caste, BJP fielded him again from Somnath in the by-election, which he earlier represented as Congress MLA. After Vajubhai Vala was made governor of Karnataka, there was no leader from Karadia Rajput community at a position of power in Gandhinagar. Barad has been Chairman of Junagadh district bank and Junagadh Kheti bank. He has been vice-president in Gujarat Congress also.

PARSHOTTAM SOLANKI
A leader of the fishing community of Kolis from Saurashtra, Purshottam Solanki is back in the ministry after being dropped by Anandiben Patel in May, soon after she became CM. A former TADA accused, Solanki was mired into controversy following corruption allegations in fishing contracts. It had cost him his fisheries portfolio as junior minister, though he had emerged giant killer in 2012 assembly elections by defeating Congress leader Gohil. It was pressure from Koli community, which forms largest vote bank in Gujarat, that led to his re-entry. Solanki had presided over a huge meeting of Kolis in Gandhinagar a few weeks ago to push for representation to his community.