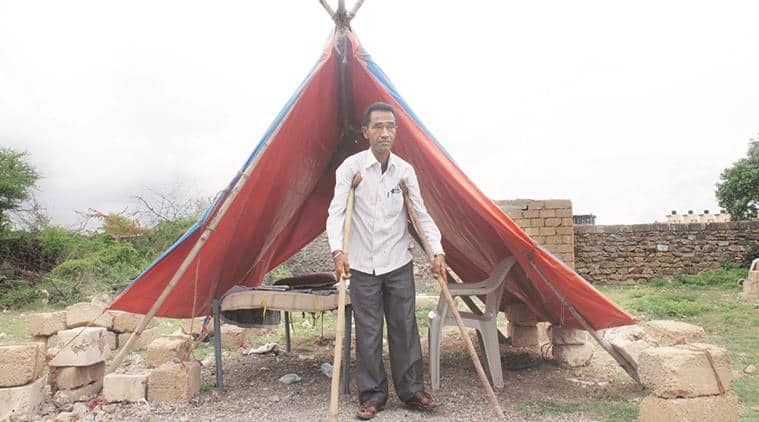 The Dalit in-charge sarpanch of a Porbandar village on Thursday alleged that he was threatened by “Bajrang Dal members” hours before his planned conversion to Islam in public, which could not take place after police denied permission for the ceremony.

Suman Chavda (40), in-charge sarpanch of Vinzarana village who had moved to Porbandar town two years ago alleging threats from the then sarpanch, was allowed to convert to Islam by the district collector on April 12 under the Gujarat Freedom of Religion Act. Following the permission, Chavda announced to embrace Islam Thursday during a ceremony slated to be held at Ambedkar Park near Nava Fuvara in Porbandar.

Police, however, denied permission for the ceremony, citing security reasons and events to mark the 125th birth anniversary of B R Ambedkar, but booked three people for allegedly threatening Chavda.

According to Chavda, when he was putting up banners of the events to mark Ambedkar Jayanti past Wednesday midnight near the office of Porbandar SP, three people on motorcycle asked him whether he had permission to do so, and threatened him with dire consequences. An FIR has been filed against one Nilesh Kharva and two unidentified men for criminal intimidation and insulting a member of the Scheduled Caste community.

Later, against the police opinion, Chavda reached Ambedkar Park, but he was not allowed to hold the conversion ceremony. “Due to pressure from authorities, hooligans and politicians, my religious guru Vasim Raza and supporters Haji Ibrahim Umar and Hafiz Habib were not allowed to come here. In the name of security, they have sent a police constable with me… But preventing me from embracing Islam even after due permission is an atrocity,” he told The Indian Express.

However, Porbandar SP Tarun Duggal said: “He wanted his conversion ceremony at Ambedkar Park on April 14, but a lot of people gathered there due to Ambedkar Jayanti celebrations. Therefore, we denied him the permission. He was sitting there, but no ceremony could take place.”

Porbandar District Collector Dinesh Patel, while allowing his application, too had asked him not to plan any conversion ceremony at Ambedkar Park. He termed Chavda’s actions as “drama”.

Chavda had filed plea for conversion before the District Collector last August, alleging discrimination by the upper caste Hindus. He had also appealed to the Collector to declare his migration “forced”. While Chavda now lives in a tent at Sitaramnagar slum of Porbandar with the help of friends and well-wishers, his parents and younger brother, who is a mason, still live in Vinzarana.

When asked about Chavda being “forced” to live in Porbandar, the Collector said, “He is himself sarpanch of the village and is free to live wherever he wants. But he has some political problems.”

According to Chavda, who uses crutches to walk after injuries due to an attack on him allegedly by the “henchmen” of former sarpanch Natha Modhwadia in 2013, he moved to Porbandar town due to threat to his life from the former sarpanch. Chavda was then deputy sarpanch.

Following an FIR and subsequent chargesheet in connection with the attack, Modhwadia was removed as sarpanch of the gram panchayat and Chavda was made in-charge sarpanch. He was also given police cover, but now it has been withdrawn.

He cited two events which led to bad blood between the two — first, when he refused to dispose of an animal carcass and second, reply to an RTI query which revealed “corruption” by Modhwadia.

Vinzarana has a population of around 1,500 of whom around 500 are Dalits. But, the majority is the Mer community to which Modhwadia belongs.

IPL 2016: I am striving to become someone like AB de Villiers, says KXIP captain David Miller