Cong seeks action against Advani on ‘wrong’ info in affidavit

Modhwadia said that his party would approach the Election Commission to initiate appropriate action in the matter. 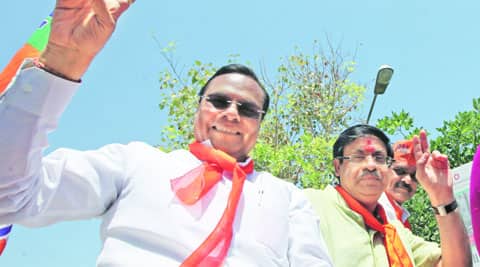 The Gujarat Pradesh Congress Committee (GPCC) on Friday demanded criminal proceedings against senior BJP leader L K Advani for discrepancies in his affidavits that he submitted along with his nomination forms for Lok Sabha polls in 2004, 2009 and 2014.

Addressing mediapersons here, GPCC chief Arjun Modhwadia said that there were different informations about Advani’s educational background in the three affidavits, meaning that none of them were correct.

Giving details about the contradictions in Advanis’s affidavit, the Congress leader said that while 2004 affidavit said that Advani passed LLB examinations in 1942, Std X exams in 1944 and Std XII exams in 1947, which was quite illogical.

“Let Advaniji produce his original certificates for verification of his claims about his education background,” Modhwadia said.

He said that his party would approach the Election Commission to initiate appropriate action in the matter.

“Voters of Gandhinagar constituency as also the rest of India want to know what is the truth about educational qualification of Advani, the ‘ex-Chhote Sardar’, who had once been projected as BJP’s prime ministerial candidate,” the Congress leader observed.

In his 2014 affidavit, Advani has claimed that he has completed his LLB from Government Law College, Mumbai.

“But in his book — My Country, My Life — Advani has claimed that he came to Delhi as a refugee on September 12, 1947 and he met Veer Savarkar on his very first visit to Mumbai in November 1947,” Modhwadia said.

“If Advani’s visit to Mumbai in November 1947 was the first visit, then how did he manage to complete his LLB from Mumbai in 1947 itself,” Modhwadia said.

How can Modi honour women if he can’t mention his wife, asks Rahul