Addressing a gathering of about two lakh from five tribal districts in Kharod, Dahod, where he also inaugurated development projects worth Rs 21,969 crore, PM Modi recalled tribal leaders such as Birsa Munda and Govind Guru, while expressing disappointment that “history has forgotten the massacre of tribals”. 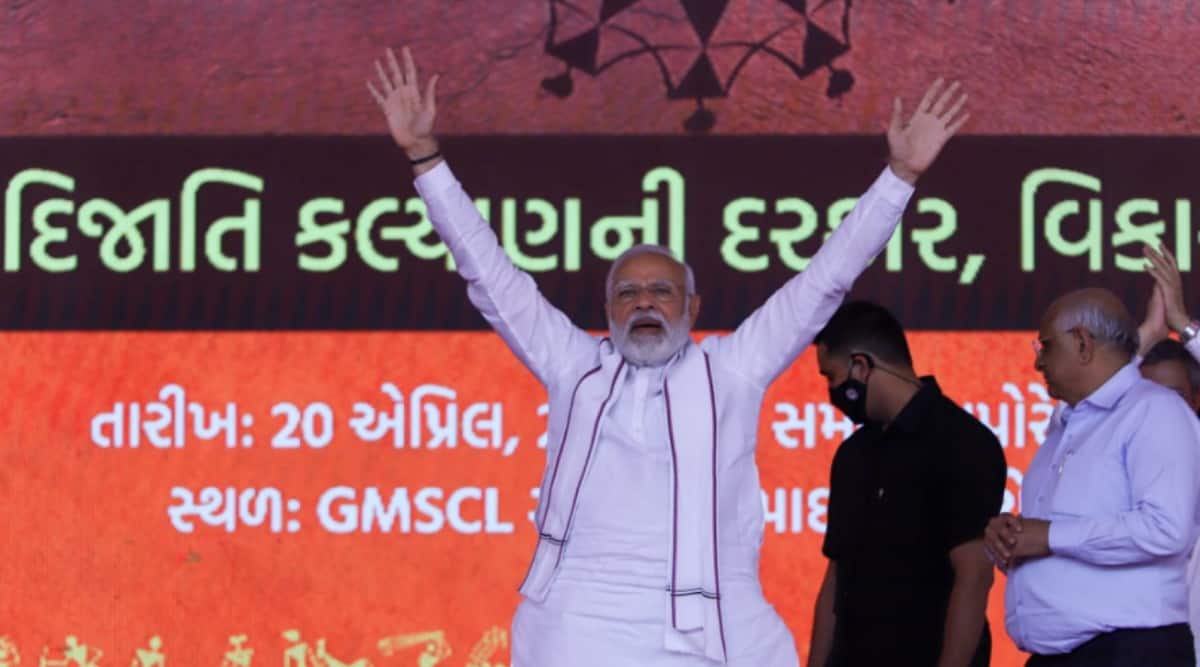 Laying the foundation to overhaul the century-old railway locomotive workshop at Rs 20,000 crore in the tribal district of Dahod, Prime Minister Narendra Modi on Wednesday urged schools and colleges in tribal districts to “ refresh the memories” of tribal heroes during the freedom struggle through skits and songs.

Addressing a gathering of about two lakh from five tribal districts in Kharod, Dahod, where he also inaugurated development projects worth Rs 21,969 crore, PM Modi recalled tribal leaders such as Birsa Munda and Govind Guru, while expressing disappointment that “history has forgotten the massacre of tribals”.

Donning a tribal jacket, headgear and ornaments, the PM said in his 29-minute speech, “We are in the 75th year of Independence… it is unfortunate that seven decades went by but the fighters who were at the forefront of India’s freedom struggle did not receive the recognition they rightfully deserved… Who can forget the valiance of Birsa Munda, a 20-year-old tribal, who fought and defeated the British…”

Adding that a museum has been built in Jharkhand to honour his sacrifice, the PM said, “During the 1857 rebellion, the entire Dahod had joined the fight… Be it Devgarh Baria, Limkheda or Dahod area, every tribal had picked up bows and arrows… Many were jailed and many lost lives… who can forget Govind Guru and the Mangadh hill massacre. It is our (BJP)government that has erected a memorial of Govind Guru at Mangadh and continue to pay our respects to him.” Urging tribal communities to “keep the strength of women, mothers and sisters at the centre” of their development plans, Modi said that several women farmers had shared success stories by taking up organic farming. (Express Photo by Bhupendra Rana)

Likening the “massacre” of tribals to the Jallianwala Bagh incident, Modi said, added that the younger generation of tribals should be reminded of the sacrifices through stories. “In the battle of Mangadh, the tribals defeated the British… The tribal belt also witnessed the same kind of massacre that took place at the Jallianwalah Bagh. Unfortunately, history has forgotten this…,” Modi said.

Urging those in the field of academics to bring alive these stories, the PM said, “Schools and colleges should ensure that these parts of history are not forgotten… The young should draw inspiration from these heroes. Schools should write plays, compose songs. These songs should be sung in schools so that everyone’s memory can be refreshed… People in cities and tribals must draw inspiration from these stories in the coming years.”

Also Read |PM Modi: Ayush visa will be introduced for foreigners who want to come to India for traditional treatments

Stating that reviving the railways in Dahod has been a “long-cherished dream”, Modi said, “When I used to visit Dahod as chief minister, I enjoyed the train rides but I was always disappointed to see that the railway work here was diminishing… As PM, I am now proud to say that I have been able to instill life back into the railway projects in Dahod… This locomotive workshop, being set up at a cost of Rs 20,000 crore will not only provide employment to tribals but also take Dahod on the list of Make In India initiatives…”

Adding that India is set to become one of the few countries to produce 9,000-horsepower electric locomotives capable of higher haulage capacity and enhance speed of freight trains, Modi said, “They will also be exported and soon you will see locomotives made in Dahod running in foreign countries and feel proud.”

Modi also added that the development in the field of education in tribal districts has created engineers and doctors. (Express Photo by Bhupendra Rana)

Modi, who also heaped praises on Chief Minister Bhupendra Patel and Gujarat BJP president CR Paatil for gathering a massive crowd at the rally, also urged people to be cautious about Covid-19.

“I spent sleepless nights during Covid-19 just to ensure that the poorest of people received the help we could provide,” Modi said.

Urging tribal communities to “keep the strength of women, mothers and sisters at the centre” of their development plans, Modi said that several women farmers had shared success stories by taking up organic farming. “I feel proud to see their eyes sparkle when they tell me how their organic produce fetched double rates… It is time tribal women also take up natural farming,” Modi said.

Mentioning about sickle cell has been an issue in tribal districts of South Gujarat, Modi said, “Trust in science. The government has been taking initiatives to ensure that young boys and girls of tribal areas, especially South Gujarat, where sickle cell is common, receive treatment that scientists are working on.”

Urging the tribal communities to create ponds, Modi said, “If you make 75 ponds in each tribal district…, we will be able to eliminate water crisis from tribal areas by the time we reach the 100 year celebrations of India’s Independence.”