The Ahmedabad Metro was on the drawing board since 2005 and was initially planned to connect Ahmedabad and Gandhinagar cities in Phase-I under Metrolink Express for Gandhinagar and Ahmedabad (MEGA), when retired IAS officer Sanjay Gupta was leading the project. 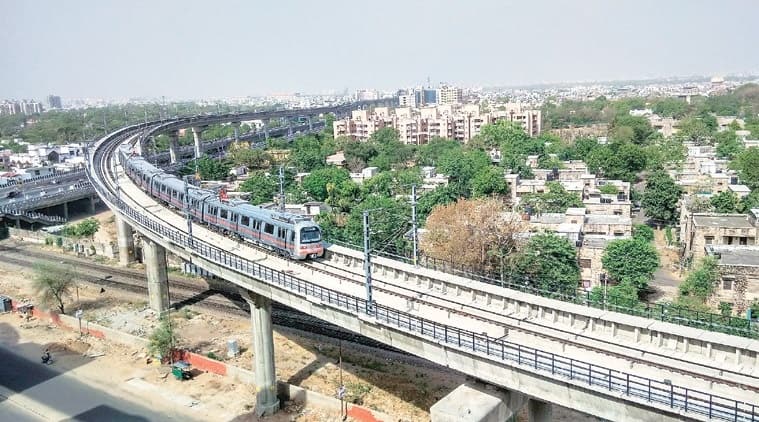 Work on the second phase of the Ahmedabad Metro at a cost of Rs 6500 crore, is yet to begin. (Representational)

The first phase of Ahmedabad-Gandhinagar Metro, for which construction work began five years ago, may be completed only by 2022-23, with the project cost pole-vaulting to over Rs 12,700 crore, a jump of Rs 2,000 crore, officials said.

“Phase-1 of the project will get extended to the third quarter of financial year 2022-23. At present, 55 per cent of the work has been completed,” a senior official of the Gujarat Metro Rail Corporation (GMRC) told The Indian Express. GMRC is a 50-50 joint venture between the Gujarat government and the Government of India.

The cost overrun in the project, launched in 2015 by then chief minister Anandiben Patel, happened due to various reasons, including the lockdown in view of the coronavirus pandemic. While Rs 600 crore had to be given to Indian Railways for using their land in the city to build metro infrastructure, the cost of relief and rehabilitation also rose from the earlier Rs 125 crore to over Rs 325 crore after the state government allowed higher quantum of compensation to be given to all those affected by the project.

The Ahmedabad Metro was on the drawing board since 2005 and was initially planned to connect Ahmedabad and Gandhinagar cities in Phase-I under Metrolink Express for Gandhinagar and Ahmedabad (MEGA), when retired IAS officer Sanjay Gupta was leading the project.

After a scam to the tune of Rs 211 crore allegedly involving Gupta was unearthed, the 100% Gujarat government-owned company not only brought in another retired IAS officer IP Gautam, but also divided the metro connectivity for Ahmedabad and Gandhinagar in two separate phases.

In Phase-I, Ahmedabad will be connected by two corridors from East to West and North to South, criss-crossing near Income Tax Circle. In Phase-2, Ahmedabad will be connected to Gandhinagar and GIFT City. Since the lockdown was announced in March-end, the lone train that was operating on the 6.5-kilometre stretch between Vastral Gam and Apparel Park has been idling in the depot.

GMRC had planned to raise the speed of the train to 80 kilometres per hour (kmph) from the current 25 kmph. However, the project has to wait for international flights to resume for experts, including those from South Korea, to return.

Even before the foundation stone of the project was laid, MEGA had already spent Rs 565 crore on the project by 2014. The routes were changed and reworked several times. After Narendra Modi became the prime minister, MEGA became a joint venture between the Centre and state and was rechristened as GMRC in January 2019.

As per the DPR prepared by GMRC, the 40 kilometres of the Phase-I was expected to cost Rs 10,773 crore and was to be completed by 2018, carrying over 4.5 lakh passengers daily. The Japan International Cooperating Agency (JICA) would give Rs 6,066 crore loan for the first phase.

Modi inaugurated the first 6.5-kilometre stretch of the network on the East-West corridor in March 2019, before the Lok Sabha elections. However, the second six-kilometre stretch will be commissioned sometime in 2021.

“The second priority reach will be inaugurated sometime in 2021. The lockdown due to Covid has further delayed the project and now the contractors are finding it difficult to get workers,” the official added. The Indian Express had recently reported that L&T flew in the first batch of 26 workers from Odisha to complete the underground section of the project. The company plans to fly in 100-odd workers who left due to the pademic,” GMRC officials said.

Original target was to inaugurate this stretch on North-South corridor between APMC and Shreyas crossing in September 2019, six months after PM Modi inaugurated the first stretch. The crisis-hit infrastructure firm IL&FS that was building this stretch was allowed to quit the project in December 2018 after it expressed inability to build further. However, eights months later, the same section was handed over to the company. “They are a bit slow. They have sorted out most of the payment issues with their vendor,” the official added.

GMRC is currently procuring 32 set of trains at a cost of Rs 1,025 crore from Hyundai Rotem, which is in the process of manufacturing and shipping them to Gujarat from its manufacturing facility in South Korea. So far 28 sets of trains have reached Ahmedabad.

Work on the second phase of the Ahmedabad Metro at a cost of Rs 6500 crore, is yet to begin. The foundation stone for the same was laid by PM Modi during his visit to the city in March 2019.