According to police, a tanker laden with chemicals was found parked near the factory premises adjacent to a drain where the chemical waste was being dumped illegally. 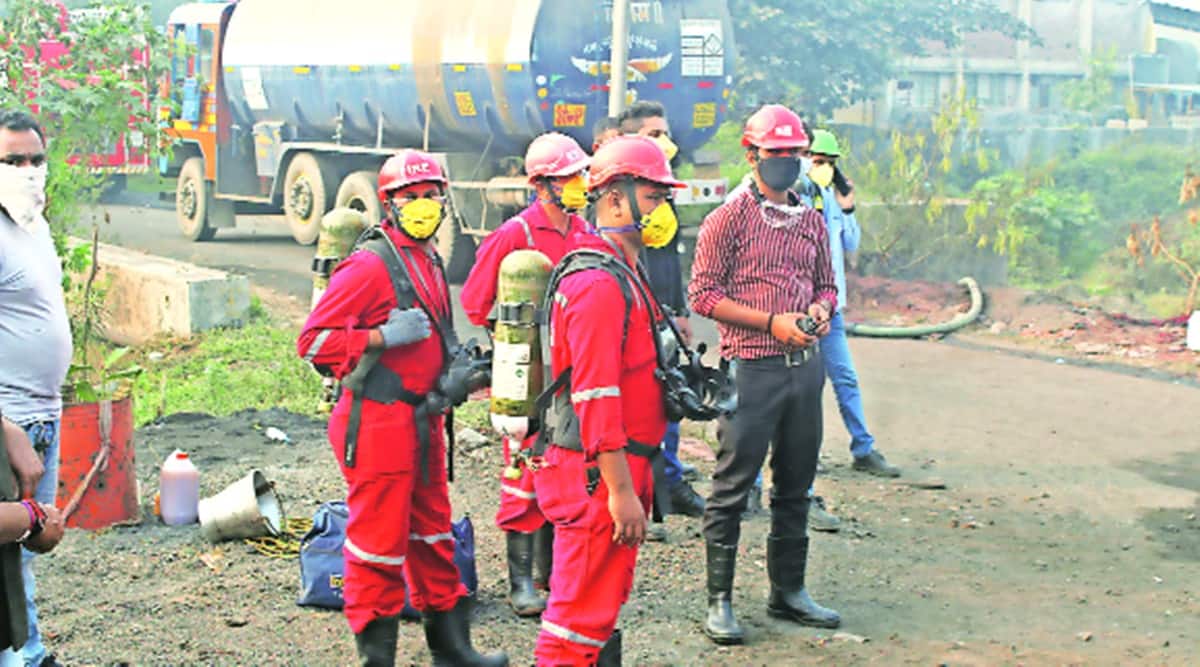 Fire personnel near the tanker that dumped chemical waste.

Six persons suffocated to death and 23 others were admitted to hospital after inhaling toxic gas from a tanker vehicle that was illegally discharging chemical waste into a drain inside the Sachin Gujarat Industrial Development Corporation (GIDC) area of Surat Thursday morning.

According to police, the incident occurred around 3.45 am when workers of “Vishva Prem Mill” in Sachin GIDC in Surat complained of feeling uncomfortable and came out. Soon, almost 30 workers fell unconscious and were rushed to the civil hospital by a police team that rushed to the spot around 4.10 am. Doctors at the civil hospital declared six persons dead while 23 others were given emergency treatment.

Three of the six deceased have been identified as Sultan (30) and Kaliben (22) from Madhya Pradesh and Sureshbhai (30).

According to police, a tanker laden with chemicals was found parked near the factory premises adjacent to a drain where the chemical waste was being dumped illegally. Police said that due to wind direction, the toxic gas emerging out of the drain reached the factory premises and affected the workers.

According to Ajay Tomar, commissioner of police, Surat city, “The police team found that chemical waste was being discharged into a drain from a tanker near the factory. Prima facie the gas emerged from the chemical waste and due to wind direction, it affected the workers inside the factory premises. Six persons died and a few others are on ventilators. Police have taken statements of a few affected and further investigation is on.”

Gujarat Chief Minister Bhupendra Patel posted on Twitter, “Many people have unfortunately died due to gas leak in Surat. May the departed souls rest in peace and their kin get the strength to bear this. I also pray for the well being of those who have fallen ill in this incident (sic).”

Gujarat Minister of State (MoS) Home Harsh Sanghavi tweeted, “Extremely pained to know about the gas leakage at a company in Sachin GIDC area of #Surat early morning today. My prayers with the people who have lost their lives in this unfortunate incident, may the injured recover soon. I am in continuous contact with the police department too, had a word with the police commissioner, instructed them to look into this matter at priority basis. We stand in solidarity with the families of departed souls (sic).”

Congress leader Rahul Gandhi on Thursday demanded a proper investigation and sent his condolences to the families of those who lost their lives in the incident along with wishing a speedy recovery to the injured.

“Condolences to those whose loved ones lost their lives due to the gas leak accident in Surat. I wish the other victims a speedy recovery. Proper investigation should be done to prevent such accidents in future,” he said in a tweet in Hindi, tagging a news report about the incident.

“We are in the process of filing an FIR under Indian Penal Code 304 for culpable homicide and 120b for criminal conspiracy against the tanker driver and owner of the chemical waste. The probe has been handed over to Surat Detection of Crime Branch (DCB),” said a senior police officer in Surat.

No consensus on holding of SAARC summit: India