Shibli Abdul Kareem, Hails from Kottayam in Kerala and has a Diploma in Computer Engineering. Faces six cases, including a case of treason at the Pithampur police station in Dhar. A special court, designated for speedy trial of the accused in the 2008 Ahmedabad serial blasts that killed 56 people and injured over 200, handed the death sentence Friday to 38 of 49 convicts. (File)

Hails from Ujjain in Madhya Pradesh. Sentenced to life imprisonment by a CBI court in Indore in 2017 for illegal possession of arms and explosives and under UAPA. Also convicted by an NIA court in Kochi in 2018 under the provisions of UAPA and other charges, including criminal conspiracy for organising a secret training camp of the Students’ Islamic Movement of India (SIMI) in Wagamon, Kerala in 2007. In 2015, a Hubli court in Karnataka acquitted him of terrorism and criminal conspiracy charges in connection with a plan to bomb the local airport. In jail, Nagori acquired a slew of educational degrees and certificate courses, including in human rights, disaster management and tourism. He was in custody of the Gujarat police for six months and is currently lodged in the Bhopal Central Jail. He is married and has four children aged between seven and 13 years.

Hails from Kottayam in Kerala and has a Diploma in Computer Engineering. Faces six cases, including a case of treason at the Pithampur police station in Dhar. The other case include 2008 Hubli blast and 2006 Mumbai train blast. Convicted in an NIA case for organising SIMI training camp at Wagamon in Kerala in December, 2007 as well as a 2006 terror case. Lodged in Bhopal jail. 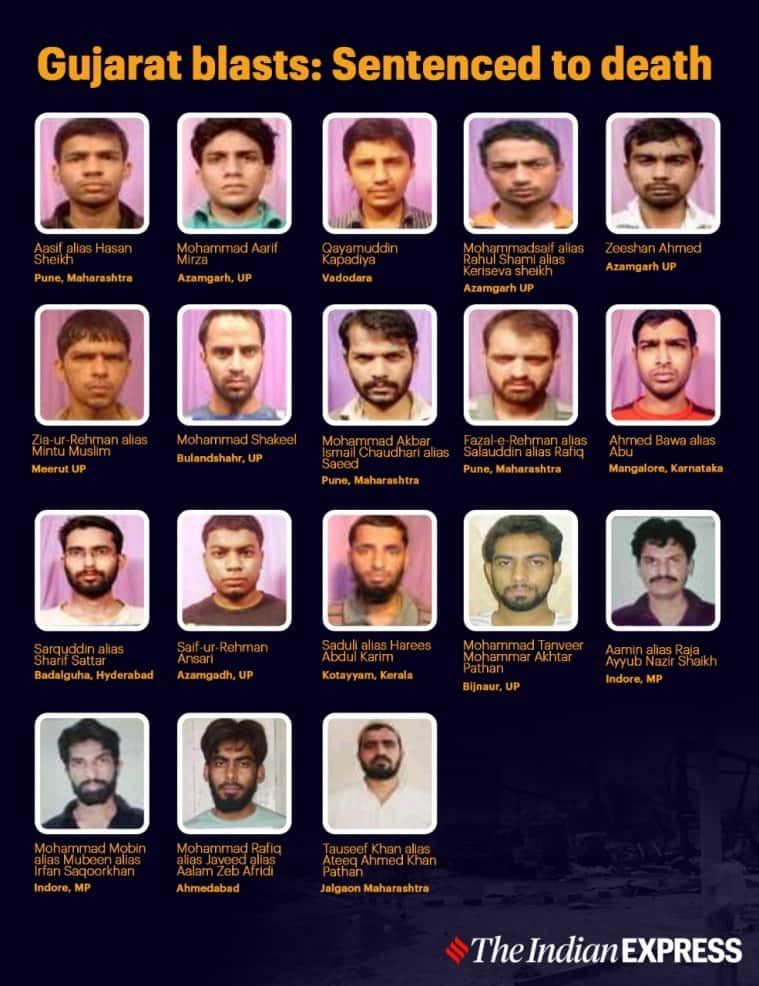 Ran a business. An accused in 12 cases in Mumbai, Indore, Ujjain, Hyderabad, Hubli and Kerala. Also an accused in the NIA case in the Wagamon SIMI gathering, where plans for several terror attacks were allegedly hatched. Has three children. Lodged in Bhopal jail.

Hails from Pune. A Class 12 pass out, he was working in the sales department of Tata Motors at the time of his arrest in September 2008. Unmarried. Lodged in a jail in Maharashtra. Faces charges under Unlawful Activities (Prevention) Act and MCOCA for committing “terrorist activities”across India in relation to serial blasts at various cities in 2008.

Native of Pune from where he was arrested in September 2008. Holds a BE (Mechanical) degree. Unmarried. Faces charges under UAPA and MCOCA at a court in Maharashtra. Also an accused in the Delhi serial blast case. He, along with others, had allegedly sent out emails to media houses in the name of Indian Mujahideen ahead of Ahmedabad and Delhi serial blasts.

Belongs to Kottayam in Kerala. Shibli’s brother. Convicted by an NIA court to 14 years of rigorous imprisonment for organising a secret meeting of SIMI in Aluva, Kerala in 2006. However, acquitted by the Kerala High Court in 2019. Curently lodged at a Bhopal jail along with his brother Shibli.

Hails from Ahmedabad and lived in Juhapura. A prime accused in the 2014 Church Street blast case in Bengaluru and is also an accused in the secret Wagamon training camp case of 2007. Also accused of arson attacks on the Israeli Visa Centre in Bengaluru in 2014 and 2015. Arrested by NIA in 2016. Dropped out of BSc in first year. Was working as an AC mechanic in Bengaluru at the time of arrest.

Lived in Juhapura, Ahmedabad. Holds a Bachelor’s degree in Electronics and Telecommunication. Worked as a lecturer. Unmarried. Faces trial in a case of Bihar Anti-Terrorist Squad (ATS) under the Unlawful Activities (Prevention) Act .

Belongs to Ujjain, MP. Ran an embroidery business. Class 6 drop-out. Faces trial in a 2012 case of Mumbai ATS for opening fire at police with AK47 rifles. Accused in NIA case of terror camps in Kerala. Has children aged 16, 15, 12 and 10 years. Belongs to Dewas, MP. Class 8 drop-out. Faces cases under MCOCA of 2009. Twelve pending cases against him include one by Vikhroli unit of Mumbai ATS in the 26/11 Mumbai terror
attacks.

Hails from Pune in Maharashtra. Ran a business at the time of his arrest in 2008. In police custody for nine months from December 2008 to August 2009. Unmarried. Faces charges under UAPA and MCOCA at a Maharashtra court for “terrorist activities” across India. Was sentenced to death in 2018 by a Nampally court for twin blasts in Hyderabad city in 2007. Faces trial in connection to the September 2008 serial blasts in New Delhi. Lodged in Taloja jail in Mumbai.

Hails from Ujjain. Lodged in a Bhopal jail. Sentenced to life imprisonment on sedition and Unlawful Activities (Prevention) Act charges in 2017 by an Indore court in a 2008 case. Married. Also accused in the attack on American Centre in Kolkata. Among the attendees of the secret training camp at Wagamon, for which he faces charges before a Kerala court.