Bharti Airtel has offered a preview of its 5G network prowess by recreating one of the most talked-about events from the 1983 Cricket World Cup. 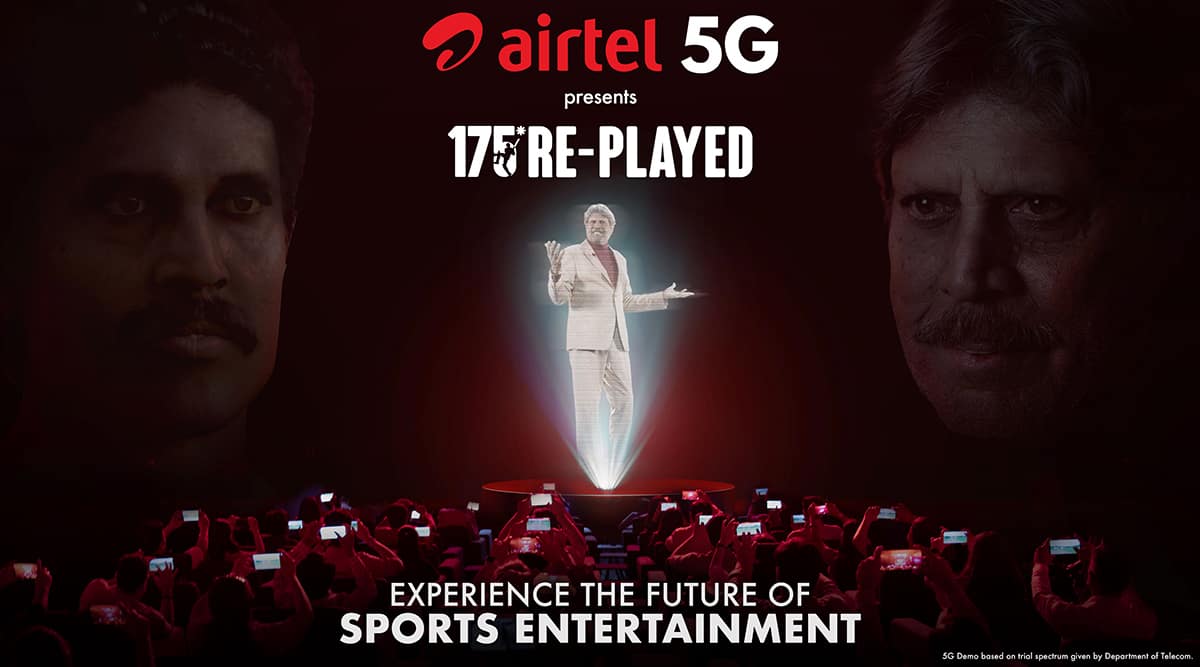 Bharti Airtel has offered a preview of its 5G network prowess by recreating one of the most talked-about events from the 1983 Cricket World Cup. While India emerged winners of the tournament, Kapil Dev’s record-breaking 175 not-out innings against Zimbabwe has stood out as a defining moment in India’s cricket history. The reason being that there is no footage of this particular match due to a strike by TV technicians at the time. That is, until now.

Using cutting-edge technology, the telecom giant brought to life key moments from the match in ‘175 Replayed’ video. Around 50 concurrent users were given the opportunity to enjoy a highly personalized 4K experience of the match on 5G smartphones. Connected to a live Airtel 5G trial network, they had access to speeds of over 1 Gbps and latency of less than 20 milliseconds. This gave them real-time access to a 360-degree view of the stadium, shot stats, and analysis, which boosted their experience further.

Sharing his thoughts on the event, Randeep Sekhon, CTO, Bharti Airtel, said, “The gigabit speeds and millisecond latency of 5G will transform the way we consume entertainment. With today’s demonstration, we have only scratched the surface of the infinite possibilities of 5G and highly personalized immersive experiences in the digital world.”

The first-of-its-kind experience also featured an Airtel 5G powered hologram of Kapil Dev, which interacted with fans and took them through important moments from the game in real-time.

Talking about his experience, the cricket icon said, “I am simply amazed by the power of 5G technology and seeing my digital avatar interact with my fans as if I am actually there. Thank you, Airtel, for this wonderful effort and bringing to life one of the most important innings of my career.”

Randeep Sekhon added, “With 5G based holograms, we will be able to transport virtual avatars to any location, and this will be a game-changer for meetings and conferences, LIVE news, and will have so many other use cases. Airtel is fully prepared for 5G in this emerging digital world and is building a solid pipeline of innovative use cases for India. We also take this opportunity to thank the Department of Telecom for giving us the trial spectrum to validate our technology and use cases.”

The demonstration was conducted at Airtel’s Network Experience Center in Manesar (Gurugram) using 5G in NSA mode, over 3500 MHz band test spectrum, allotted by the Department of Telecom, Government of India. It provided an insight into how 5G could change the landscape of video entertainment in the future. It also offers an idea of the power of Airtel’s 5G network once it has been rolled out commercially.

This is the latest in several 5G trials that Airtel has held over the last year. In its attempt to drive the adoption of the technology, the company has held several live demonstrations in locations across India. Last year, it hosted a unique Cloud Gaming experience on a live Airtel 5G network and launched the #5GforBusiness initiative. Airtel has also joined forces with a number of technology companies and brands to test 5G based solutions for enterprises.

Disclaimer: 5G Demo based on trial spectrum given by Department of Telecom.