. The additional spending on account of inflated subsidies bill and any further extension to the free foodgrains scheme is seen as adding to the fiscal burden, which may necessitate reducing government expenditure. 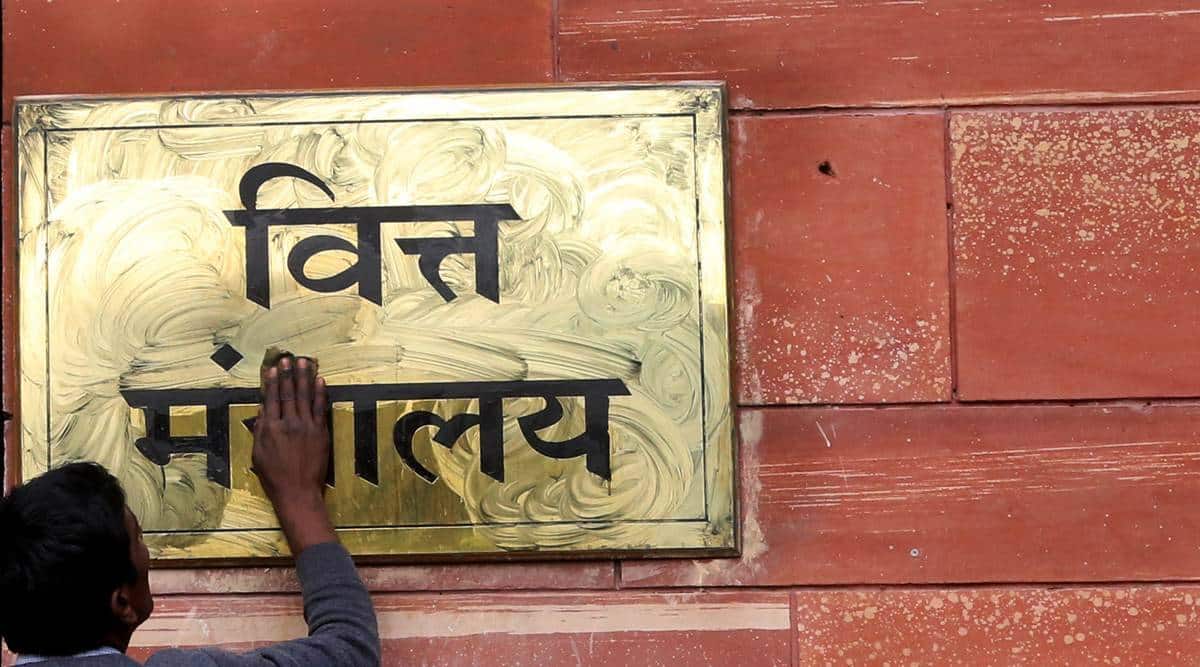 A man is cleaning the name plate of finance ministry outside the North Block. (Express photo by Renuka Puri)

With three months left for the government to present the Budget for the next fiscal, it is staring at a fiscal challenge that appears to have turned steeper on account of some incremental expenditure needs: a provisioning for the newly announced recruitment drive for 10 lakh personnel and the stepping up in allocations for security and administrative preparations for the G20 summit to be held in India over the course of the next year.

Discussions in key economic ministries are learnt to be centering around concerns of reduced space to cut spending in other schemes to maintain the fiscal targets as there are already existing challenges due to higher subsidies for food, fuel and fertilisers and an imminent extension to the subsidised food grains scheme. A downward revision of the new windfall tax on fuels is also likely to impact collections under this head, even as overall tax collections appear buoyant. Most ministries and departments have seen an escalation in their estimates on account of higher transport costs due to high fuel prices, a senior government official told The Indian Express. Security and intelligence agencies are also learnt to have sought additional funds for purchase of over 1,000 cars and key security apparatus for preparations for the G20 summit. Key economic ministries are spending more to carry out the administrative work in preparation for the summit to be held next year.

Discussions in key economic ministries are learnt to be centering around concerns of reduced space to cut spending in other schemes to maintain the fiscal targets as there are already existing challenges due to higher subsidies.

Additionally, the recruitment drive announced by the government for 10 lakh posts, out of which 75,000 will be recruited in the first phase, is also expected to result in “a substantial fiscal outgo”. Last week, Prime Minister Narendra Modi handed out appointment letters to 75,000 appointees as part of the Rozgar Mela — a recruitment drive for 10 lakh personnel across 38 ministries and departments. “Additional spending would imply a need to cut expenditure somewhere even though receipts have grown. There is a challenge as the fiscal space to manoeuvre has shrunk,” the official said.

This comes at a time when the government is already grappling with an additional subsidy bill of over Rs 2.4 lakh crore for food, fuel and fertiliser subsidies, most of which has not been accounted for in the Budget for this fiscal. The additional spending on account of inflated subsidies bill and any further extension to the free foodgrains scheme is seen as adding to the fiscal burden, which may necessitate reducing government expenditure. Last month, the government gave nod to extend the subsidised foodgrains programme beyond the September deadline only for 3 months despite the upcoming state polls prompted by specific concerns flagged by the Finance Ministry that any extension beyond these three months would have meant overshooting the budgeted level of borrowing to meet the incremental expenditure.

Though tax revenues are expected to overshoot budget targets by over Rs 2.5-3 lakh crore this fiscal, it is being felt that the revenue trend will have to turn better in October-March with some signs of moderation in corporate tax growth. The collections from windfall tax on fuel are also expected to come lower than expected. Query sent to the Finance Ministry by The Indian Express on the issue went unanswered.

Another worry is on the external front, with fears of further aggressive rate hikes by the Federal Reserve resulting in FII outflows. India’s current account funding needs continue to be large, with the deficit for the current financial year expected to widen to levels last seen in 2013. Higher, expensive imports and flagging exports due to a global slowdown has resulted in higher trade deficit.

Finance Ministry officials, however, maintain that the government will stick to its fiscal deficit target of 6.4 per cent of the GDP for 2022-23. Officials said the government has the cushion of higher tax revenues and the upside in GDP in nominal terms due to high inflation will also help the fiscal arithmetic. However, any additional spending of Rs 25,000 crore is expected to approximately result in 0.1 percentage point deviation from the fiscal deficit target. The Finance Ministry has begun its inter-ministerial consultative exercise to discuss revised estimates with other ministries from October 10

“The government remains committed to its fiscal deficit target of 6.4 per cent (of the GDP). It will remain most transparent in its fiscal math exercise. There are challenges on account of subsidies and additional spending and we are keeping a close watch on it,” a senior government official told The Indian Express.