Ministry of External Affairs in a statement said the first day discussions were held on ‘Technological Transformation’ and ‘Green Development and Lifestyle for Environment (LIFE)’, a dialogue on ‘Global & Regional Economy: Prospects & Challenges’ along with an informal Chai pe Charcha session. 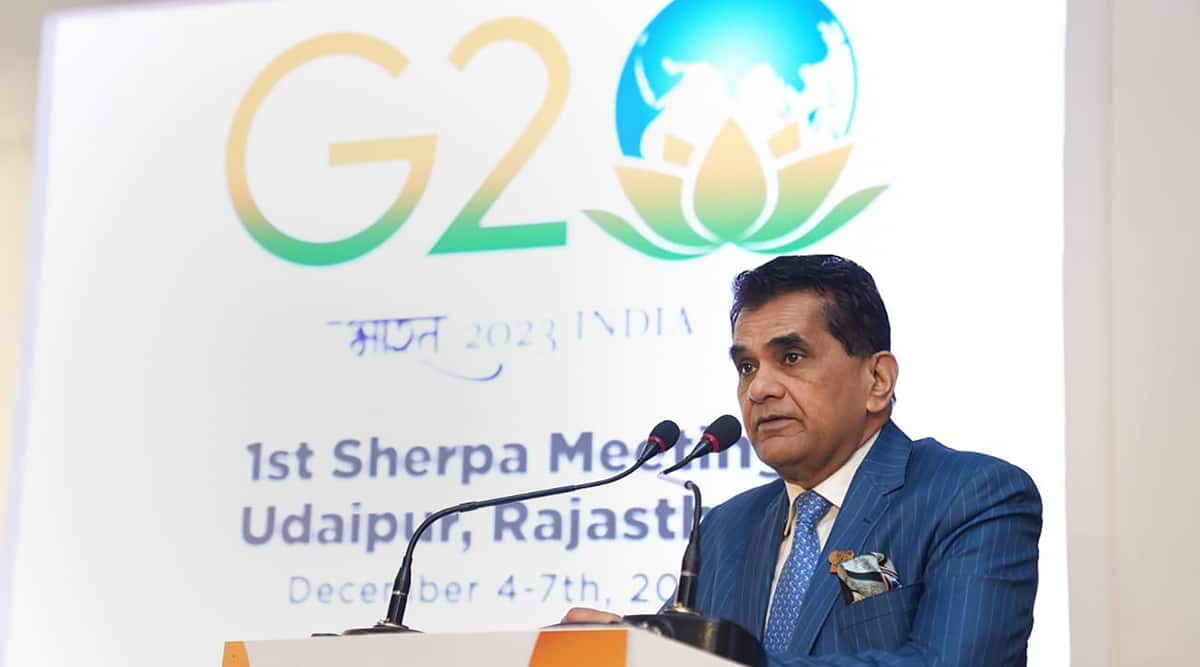 Pointing to the significance of the Global South, India listed out accelerated, inclusive and resilient growth and progress on Sustainable Development Goals(SDGs), particularly health and education, as the key priorities for the G20 Summit. Beginning the first formal meeting of the Sherpa track in Udaipur, India’s Sherpa Amitabh Kant invoked India’s G20 presidency theme of ‘Vasudhaiva Kutumbakam’ — ‘One Earth One Family One Future’ — to evolve the strategies for green development, fostering climate finance, technological transformation and digital public infrastructure, readying multilateral institutions for the 21st century and a focus on the three Fs — food, fuel and fertilisers — alongside the broader theme of women-led development.

“Our perspective is that we should have a win-win collaboration between all of us, developing countries, Global South and advanced economies. We need to bring new approaches. This is a unique forum of both developed world and emerging economies so we need to build approaches to benefit the world on key global issues. The world is facing a vast number of challenges,” Kant said in his opening remarks.

“The challenges we face today can only be solved by working together through hope, harmony and healing and our first concern should be towards whose need is greatest and therefore, we need to focus on the Global South as well. Our G20 presidency will seek to advocate the oneness of all in accordance with our theme of ‘One earth, One Family, One Future’ and our priorities will reflect not just the aspirations of all of you, the G20 partners but also the Global South whose voice is often unheard,” he added.

Ministry of External Affairs in a statement said the first day discussions were held on ‘Technological Transformation’ and ‘Green Development and Lifestyle for Environment (LIFE)’, a dialogue on ‘Global & Regional Economy: Prospects & Challenges’ along with an informal Chai pe Charcha session.

Economic Affairs Secretary Ajay Seth made a presentation outlining key economic challenges facing the world, and highlighted the need for collective efforts by the G20 to respond to them. Kristina Kostial, Deputy Director of Strategy and Policy Department, IMF, made a presentation on the pressing global economic challenges of the day, including the international debt situation and trade. “The dialogue discussed ideas for the world to tackle such concerns and emerge more resilient to economic vagaries,” the MEA statement said.

The four-day gathering of the Sherpa track has started its first formal meeting with dignitaries from 40 countries. The Sherpa track, which will set the agenda for the G20 leaders next year, will engage on topics from 13 working groups.

The four-day gathering of the Sherpa track which began Sunday started its first formal meeting with dignitaries from 40 countries on Monday. The Sherpa track, which will set the agenda for the G20 leaders in September next year, will engage on topics from 13 working groups ranging from energy, trade and investment, development, employment, tourism, agriculture, digital economy, health, education, culture, environment and anti-corruption along with points from the two new groups — Disaster, Risk and Resilience Group and Startup20 Engagement Group — brought to the forefront by India under its presidency.

On trade and investment , the discussions will focus on resilient global value chains, integrating small and medium industries and global trade and trade for growth and prosperity, Kant said. On development, data for development, accelerating progress on sustainable development goals, lifestyle for the environment will be discussed. The employment working group will talk about addressing the global skills gap, sustainable financing for social security, gig and platform economy and social security, while the tourism working group, will discuss green tourism, digitisation for transforming tourism, skills for tourism, he added.

The group on agriculture will talk about enhancing food scrutiny and nutrition, sustainable agriculture with a climate-smart approach, tech and digitisation for agriculture. “For digital economy, we have focused on digital public infrastructure, quite a bit on our own experience of creating digital identities for everyone, creating bank accounts for everyone, which has enabled us to lift vast segments of population above the poverty line through direct benefit transfers and fast payments…public digital platforms and cybersecurity and cyber safety which to our mind will be very critical in the digital economy of tomorrow. On the health side, we will talk about prevention, preparedness, and response for health emergencies, digital health for universal access and improved service delivery and strengthening cooperation for vaccines, therapeutics and diagnostics. These are all the issues we brought out in our issue notes and on the education issue note, we brought out foundational literacy and numeracy, strengthening research and innovation, tech-enabled learning and the future of work which is very critical,” he said.

The discussions on energy will focus on low-cost finance for energy transition, about fuel for the future, that is, bio-energy cooperation amongst G20, the principles of green hydrogen, Kant said adding that it is “very important if you have to decarbonise the economy, and universal access to clean energy”.

The G20 discussions come at a time when the global economy is facing several headwinds in the form of rising global debt, runaway inflation and growth slowdown, which will also be discussed in the Sherpa track. The G20 consists of two parallel tracks: the Finance track, led by Finance Ministers and Central Bank Governors, and the Sherpa track. The presidency steers the G20 agenda for one year till the final summit next September.

The Group of Twenty (G20) is an intergovernmental forum comprising 19 countries (Argentina, Australia, Brazil, Canada, China, France, Germany, India, Indonesia, Italy, Japan, Republic of Korea, Mexico, Russia, Saudi Arabia, South Africa, Türkiye, United Kingdom and United States) and the European Union. The G20 members represent around 85 per cent of the global GDP, over 75 per cent of the global trade, and about two-thirds of the world population.

During its term, India will hold over 200 meetings across 32 different workstreams in 50 cities, involving ministers, government officials and civil society members, leading up to the final summit in New Delhi in September 2023. The timing of the summit is seen as crucial, coming ahead of the general elections in 2024.