Real worry, however, is soaring global prices and availability of nutrients in rabi season ahead of UP elections. Last year at this time, India had contracted urea imports at around $290 per tonne CFR (cost plus freight). Those prices are now at $510-515 per tonne. (File Photo)

Retail sales of fertilisers have fallen 12.4 per cent in April-July over the corresponding four months of last year. All major nutrients have posted lower sales: urea (minus 12.8 per cent), di-ammonium phosphate (minus 27.5 per cent), muriate of potash (minus 8.8 per cent) and complex fertilisers (minus 6.5 per cent). Only single super phosphate sales have registered a 4.6 per cent year-on-year increase.

Reduced fertiliser purchases by farmers is consistent with the Agriculture Ministry’s data that shows a 4.7 per cent drop in the area sown under kharif crops till July 30, relative to the coverage during the same period of the 2020 season. Farmers have so far planted 4 per cent less area under rice, with these lagging by 3 per cent for pulses, 5.7 per cent for coarse cereals, 5.5 per cent for oilseeds and 8.7 per cent for cotton.

Both fertiliser sales as well as kharif acreages being down are largely due to an erratic monsoon. While the country received 9.6 per cent above long-period average rainfall in June, it was 6.7 per cent below normal in July. But more important was an extended dry spell from around June 20 to July 11. Since mid-June to mid-July is the peak time for kharif sowing, many farmers are seen to have missed out on that window. While the rains revived from July 12, overall sales of fertiliser for the month were still 16.6 per cent down compared to July 2020 (see table). 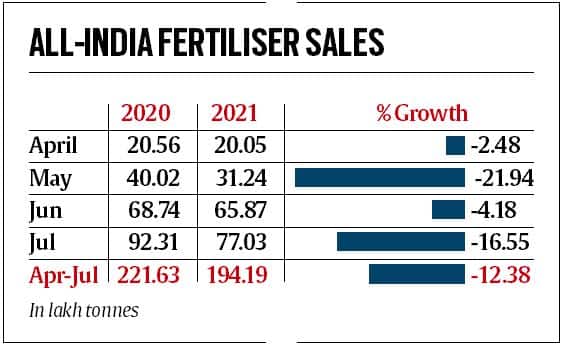 Satish Chander, director-general of the Fertiliser Association of India, felt that comparing April-July 2021 sales to April-July

2020 may not be wholly accurate. Last year, there was lot of panic buying because of the lockdown-related uncertainties. Although agricultural inputs were exempted from any movement, distribution or retailing restrictions, farmers as well as dealers stocked up material in anticipation of kharif demand. Fertiliser sales in April-July 2020 were, in fact, 56.7 per cent higher over April-July 2019.

But sales slowed in the subsequent months, with the fiscal (April-March) as a whole recording 9.7 per cent growth.

“We are back to normal growth now and hope it to be so for the rest of the year,” said Satish Chander.

Fertiliser prices have basically tracked global agri-commodity prices. The Food and Agriculture Organization’s world food price index has soared by 33.9 per cent between June 2020 and June 2021. But in fertilisers, there are a couple of additional factors at work.

The first is China. India has been importing roughly 3 million tonnes (mt) of urea and 2-3 million tonnes of DAP annually from China. But China has, of late, been resorting to strategic stockpiling of fertilisers rather than supplying to the world market.

The second is Belarus, which is India’s second largest supplier of MOP after Canada. The recent economic sanctions imposed by the US and the European Union against the Belarusian regime have raised the prospects of a further hardening of MOP prices.

“Morocco’s state-owned company OCP, too, has raised its supply price of phosphoric acid for India from $998 to $1,160 per tonne. This is a clear indication we are in a seller’s market in fertilisers similar to that witnessed back in 2008,” an industry expert pointed out.

According to him, the problems in fertiliser will not be in kharif, but in the upcoming rabi season. “The government should review the stock availability of all nutrients factoring in view the tightening global supply conditions. Not doing can prove costly just ahead of Assembly elections in Uttar Pradesh, Punjab and other states in February-March,” he added.