‘Only 17% of restaurants open, industry operating at 8-10% of pre-COVID levels’

Notably, the report pointed out, even in cities where restrictions have been lifted, only 17 per cent dining out restaurants are open for business at the moment, which are also running at low capacity. However, a gradual uptick in daily business has been observed in recent days even as hoteliers take to the 'cloud kitchen' model to keep their business running. (File)

Despite a move towards unlocking the economy, the restaurant industry is only operating at 8-10 per cent of the pre-Covid levels, with the slump largely being on account of markets being in lockdown, consumers not stepping out due to fear of transmission and restaurants not opening up, even if the city is not in lockdown, a report by Zomato said. 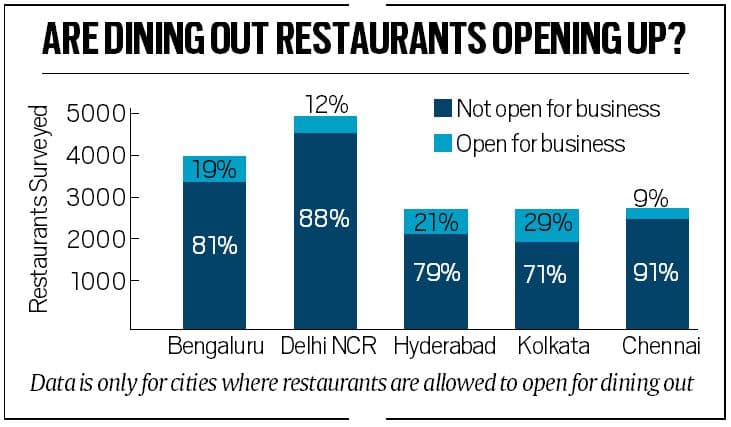 Contrarily, Zomato reported its food-delivery business clocking 75-80 per cent of pre-Covid gross merchandise volumes (GMV). “Some areas in some cities are clocking higher GMV than before (affluent neighbourhoods no longer fear contagion from food delivery, and are combining home entertainment with outside food). Predictably, residential areas are doing 50 per cent better than commercial areas. Restaurants in and around commercial districts are expected to take the longest to recover,” the report said, adding that sporadic lockdowns in some cities disrupt business as usual for a few days but delivery volumes bounce back as soon as these lockdowns are lifted.

It said the number of restaurants offering delivery is at 70 per cent of pre-COVID levels, of which about 5 per cent did not offer food delivery services pre-COVID.