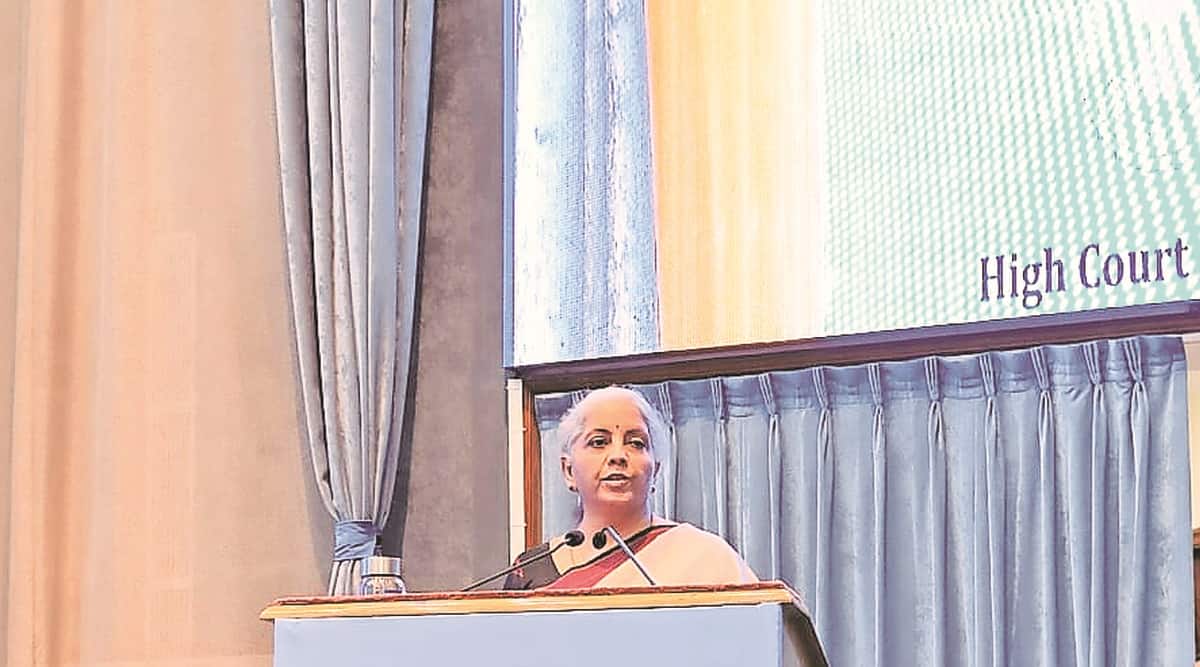 Finance Minister Nirmala Sitharaman at the seminar organised by the Delhi High Court. via Twitter @FinMinIndia

The country is at a stage where growth and the focus on development have got to be strengthened from every side, with intellectual property rights (IPRs) playing an important role in it, said Finance Minister Nirmala Sitharaman.

Addressing the ‘National Seminar on Adjudication of IPR Disputes in India’ organised by the Delhi High Court — with Chief Justice of India NV Ramana and other judges in attendance — she said 28,000 patents were granted in 2021 against 4,000 in 2013-2014 and the last year also saw registration of 2.5 lakh trademarks and over 16,000 copyrights, which will have a “very strong ripple effect” on the economy.

“These are not small numbers. This is the strength of the economy, in supporting such innovations and copyrights, all of which when scaled up are going to have a very strong ripple effect into the economy itself and that would generate its own ecosystem and revenues,” Sitharaman added.

The Finance Minister said the Centre encouraged startups while protecting their IPRs as the boost would not have been possible with only “giving up restrictions”.

She also highlighted the importance of innovation for the economy and said that “if general manufacturing and general production give you a level of 3 (on a scale of 10), innovative activities bring in about 7 to 8.”

“As we were removing restrictive rules and regulations, we were also making sure that we give a framework within which they can work. Not just start-ups, but we were also supporting R&D in this country,”  Sitharaman said.

“India is at a stage where growth and the focus on development have got to be strengthened from every side. IPR plays a very important role in it,” she stated.

The Union minister said that the support of the judiciary has encouraged more innovations and copyrights coming into India and there is now a systematic approach to deal with IPR issues.

“The (IPR) bench has been set up (at the Delhi High Court). You are going to face the challenge of increasing numbers but this kind of support, the knowledge being shared, rules being set, the framework being provided, I think it will be far easier for the courts to take up this challenge,” she said.

Ahead of Assembly polls: Come up with vision for Gujarat, says Rahul