Govt lines up heavy legislative agenda in Parliament this week

Govt has lined up a heavy legislative agenda in Parliament including a bill seeking to replace coal blocks allocation ordinance. 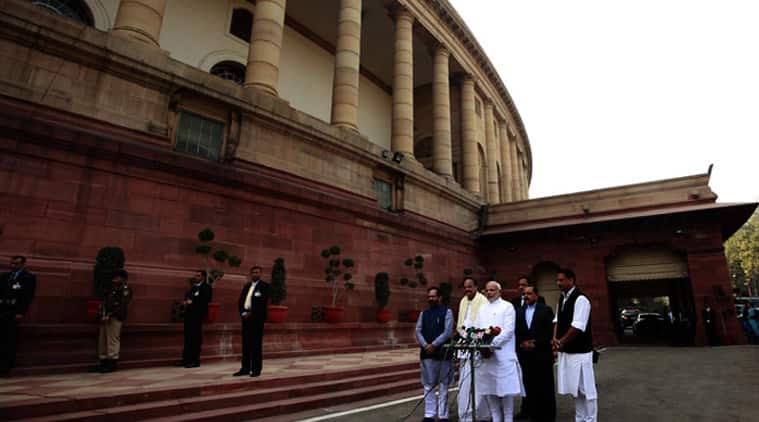 Government has lined up a heavy legislative agenda in Parliament this week including a bill seeking to replace coal blocks allocation ordinance. (Source: Express Photo by Neeraj Priyadarshi)

Unfazed by the stalemate over the Sadhvi Niranjan Jyoti issue, government has lined up a heavy legislative agenda in Parliament this week including a bill seeking to replace coal blocks allocation ordinance.

The ordinance was brought in the wake of the Supreme Court decision cancelling 214 coal blocks in September which had unveiled the NDA government’s ambitious coal sector reforms.

BMS as also AITUC, CITU, HMS and INTUC have jointly opposed the government’s proposal to allow private players to mine coal and sell it in the open market, a right till now reserved with the state-owned Coal India Limited (CIL).

The ordinance has also come under attack from the Left parties.

The bill seeking to replace Textile Undertakings (Nationalisation) Laws (Amendment and Validation) Ordinance, 2014 is also on the agenda.

The ordinance was brought to shield the National Textile Corporation from rent control laws that have been used to evict its sick textile units from prime land in several cities.

In the Rajya Sabha, several bills were scheduled to be taken up during the second week but could not be done so due to disruptions.

They include: The Textiles Undertakings (Nationalisation) Laws (Amendment and Validation) Bill, 2014 to replace an Ordinance, The Constitution Scheduled Castes Orders (Amendment) Bill, 2014, The Central Universities Bill, 2014 and The School of Planning and Architecture Bill, 2014 that have already been passed by the Lok Sabha this session.

During the second week of winter session last week, Lok Sabha passed four bills besides taking up another which remained inconclusive. In all, Lok Sabha passed nine bills during the first two weeks while Rajya Sabha could clear six.

The Upper House could not take up for discussion issues like prevailing agrarian crisis and the statement of the government on WTO talks besides calling attention motion on the naming of Shamshabad Airport due to disruptions.

India hammered us in their conditions so we have to give back to them, says Shane Watson