The rules also specify that the permits for conventional cargo (other than over-dimensional cargo) are valid for one day for the movement of goods for 100 km, and in the same proportion for following days. 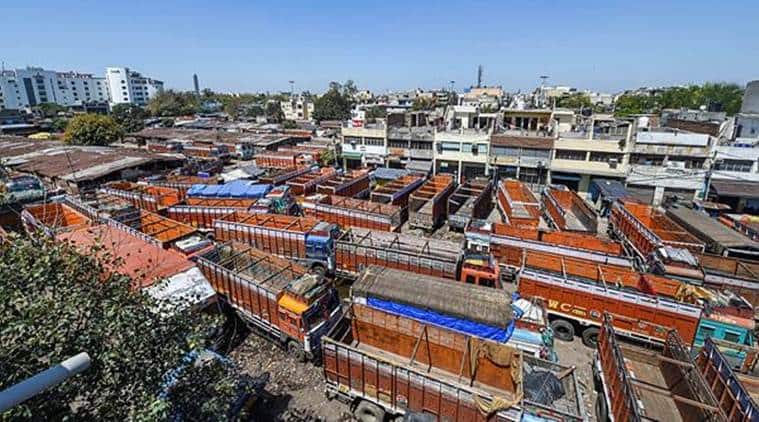 Trucks at Azadpur Mandi during the lockdown in New Delhi on April 2. Many trucks are stranded across the country since March 15, when states started to lock their borders. (Photo: PTI)

The government has retrospectively extended the validity of e-way bills under the Goods and Services Tax (GST) regime that would have expired between March 20 and April 15 to April 30. Also, in a move that will ease the working capital requirements for businesses, the government has deferred the implementation of 10 per cent restriction on availing input tax credit during February-August, which would then be cumulatively adjusted in September.

With hundreds of trucks getting stranded across the country since March 15, when states started to lock their borders down culminating into a national lockdown announced by the Centre, The Indian Express reported on April 2 about transporters raising concerns over potential penalties arising from expired e-way bills. Truckers were having e-way bills for goods in transit or in godowns, which were getting expired and could not be renewed on due dates.

“… where an e-way bill has been generated under rule 138 of the Central Goods and Services Tax Rules, 2017 and its period of validity expires during the period 20th day of March, 2020 to 15th day of April, 2020, the validity period of such e-way bill shall be deemed to have been extended till the 30th day of April 2020,” the Finance Ministry said in a notification late Friday. The Ministry also notified other compliance-related relaxations, which were announced earlier.

According to notified e-way bill rules, every registered supplier requires prior online registration on the e-way bill portal for the movement of these goods. The rules also specify that the permits for conventional cargo (other than over-dimensional cargo) are valid for one day for the movement of goods for 100 km, and in the same proportion for following days. Tax officials have the power to scrutinise the e-way bill at any point during transit to check tax evasion.

In October last year, the GST Council put a cap on input tax credit at 20 per cent of the eligible credit for buyers whose suppliers did not upload invoices, which was then further curtailed to 10 per cent in the GST Council meeting on December 18.

Abhishek Jain, tax partner, EY said, “The relaxation for allowing cumulative reconciliation via-a-vis month on month reconciliation for availing input tax credit was an imperative one to obviate higher cash flows and to reap the benefit of the relief provided through extended timelines for filing of GST returns”.