Rs 1 crore disclosed per person on average in Income Declaration Scheme, figures likely to be revised upwards, money to be used for public welfare, says government. 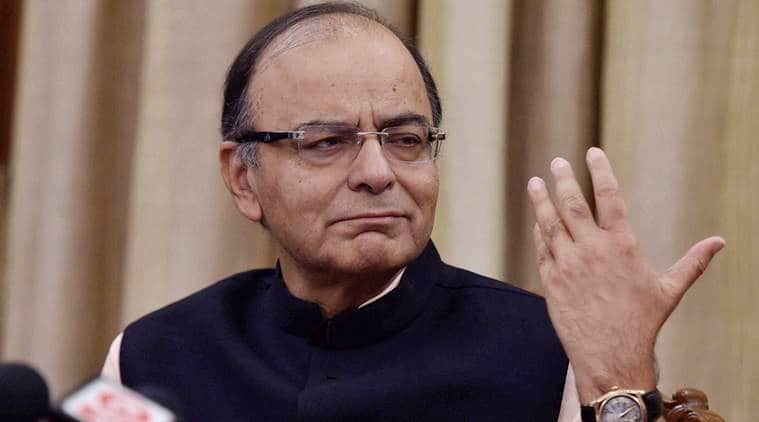 The figures are likely to be revised upwards after the tabulation of data is finalised, Finance Minister Arun Jaitley said. (Source: File)

In the largest-ever declaration of black money, Rs 65,250 crore was declared as unaccounted income and assets under the government’s four-month-long Income Declaration Scheme (IDS) 2016, which ended on Friday.

A total of 64,275 persons declared their unaccounted wealth under the window, translating into an average of Rs 1 crore of declaration per person.

The figures are likely to be revised upwards after the tabulation of data is finalised, Finance Minister Arun Jaitley said. Out of the total amount of Rs 29,362 crore as tax and penalty from these declarations, around

Rs 14,681 crore will flow into central government coffers in the current financial year, while the remaining amount will be collected in 2017-18.

“Some disclosures have not been tabulated and those have to be verified. So today’s figure will be revised upward. So far 64,275 declarants have disclosed in the declaration an amount of Rs 65,250 crore,” Jaitley told reporters. It is a “good figure”, the declarations came from people with significant resources, and the government would maintain the secrecy of these disclosures, the Finance Minister added.

The money would flow to the Consolidated Fund of India and would be used for public welfare, Jaitley said.

Listing the achievements of the government in the fight against black money over the last two years, the minister said that from among the names figuring in the HSBC list, the Central Board of Direct Taxes has already filed 164 prosecutions, amounting to an assessment of Rs 8,000 crore. The probe is being monitored by the Special Investigation Team (SIT) set up under the directions of the Supreme Court.

Investigations in the Panama Papers has led to 250 references being made to other countries asking for details
about tax evaders, bank accounts, etc., Jaitley said. In the details of accounts provided by the International Consortium of Investigative Journalists (ICIJ), Rs 5,000 crore of undisclosed deposits in foreign accounts have been detected and 55 prosecution cases have been filed, he said.

On February 9, 2015, The Indian Express published, in partnership with the Washington-based ICIJ and Paris-based newspaper Le Monde, a global investigation called the ‘Swiss Leaks’, a trove of secret documents from HSBC’s Swiss private banking arm. The number of Indian HSBC Geneva bank account holders the investigation listed was 1,195 — almost double the figure available until then with the Indian government — with a balance of over Rs 25,000 crore.

On April 4, 2016, The Indian Express partnered with ICIJ and Suddeutsche Zeitung, Munich, to publish details of the ‘Panama Papers’, leaked documents from a Panamanian law firm that featured over 500 Indians linked to offshore firms. 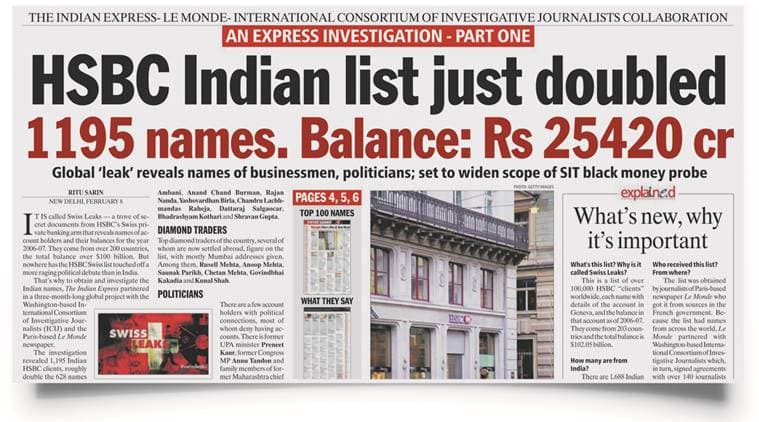 Earlier, on April 4, 2013, The Indian Express had partnered with ICIJ in the global investigation that detailed 612 companies registered by Indians in the British Virgin Islands, Samoa and the Cook Islands. As many as 50 of these cases have been prosecuted in Delhi alone.

The government in July extended the deadline for payment of tax and penalty and allowed declarants to pay the
amount in three instalments by September 30, 2017.

Last year, under a similar scheme for foreign black money holders, 644 declarations of undisclosed foreign income
and assets were received and Rs 2,428 crore was collected in taxes.

Commenting on the declarations made under the Voluntary Income Disclosure Scheme (VDIS) amnesty scheme brought by the then Finance Minister P Chidambaram in 1997, Jaitley said IDS can’t be compared with VDIS since that was an amnesty scheme with a lower tax rate.

Unlike the IDS, the VDIS did not penalise the declarants and allowed them to value the assets at the market prices of 1987 rather than rates of 1997, he said.

Prime Minister Narendra Modi took to Twitter to congratulate Revenue Secretary Hasmukh Adhia and Central Board of
Direct Taxes Chairperson Rani Singh Nair saying that their team had “put tremendous effort on all aspects relating
to IDS-2016”. Adhia responded on Twitter by saying that he was “grateful” to the PM for congratulating him.

The tax department took several measures to spread awareness about the scheme, due to which declarations picked up during the last two months, a CBDT statement said. More than 5,500 public meetings in various cities were conducted. Talkathons and street plays were organised, and a series of FAQs were issued by the department to spread awareness about the scheme.

A sharp rise in searches has resulted in the seizure of cash of Rs 1,986 crores as well as undetected income of Rs 56,378 crore in the last two and half years, Jaitley said.

The CBDT through intensive monitoring of the database of non-filers of tax returns has collected Rs 16,000 crore in additional tax collections, the CBDT said in a release. Cases of prosecution and compounding in the last two and half years rose to 3,626 — or more than double that of the previous two years, it said.