The World Cup has historically been a boon for Twitter, bringing in record traffic and an influx of advertising dollars.

But this time, when the global soccer tournament started Nov. 20, Twitter’s U.S. ad revenue was running at 80% below internal expectations for that week, three people with knowledge of the figures said.

In tandem, Twitter was rapidly cutting its revenue projections. The company previously forecast that it would generate $1.4 billion in the last three months of the year, down from $1.6 billion a year ago because of the global economic downturn. But as Twitter kept missing its weekly advertising targets, that number slid to $1.3 billion, then to $1.1 billion, two people said.

Many of the company’s troubles can be traced to Musk’s takeover in late October. Since then, advertisers — which provide 90% of Twitter’s revenue — have paused some spending on the platform, citing concerns about how Musk might change the service. The billionaire, a self-described “free speech absolutist,” has reinstated banned accounts and dropped at least one misinformation policy. Hate speech on Twitter has soared in recent weeks, researchers found.

At the same time, Musk has alternated between wooing advertisers and blasting them. Last month, he threatened a “thermonuclear name & shame” of brands that halted their spending on Twitter. This week, he briefly picked a fight with Apple, which was on track to spend more than $180 million on Twitter ads this year, three people said.

Twitter’s advertising business has become so fraught that it has started offering brands additional incentives. Some brands are committing only to promotions for events, such as the Super Bowl, with heavy discounts or clauses that allow them to back out for any reason, according to internal documents and three people familiar with the efforts. Automakers are among the most concerned advertisers, with General Motors raising questions about whether Twitter’s data would be shared with Musk’s car company, Tesla, three people said.

“There hasn’t been any level of trust from us with Twitter, especially with the whiplash we’ve experienced over the last four weeks,” said Ellie Bamford, head of global media at R/GA, a creative agency. Last month, IPG, R/GA’s parent and one of the world’s largest advertising companies, recommended that its clients pause their advertising on Twitter. 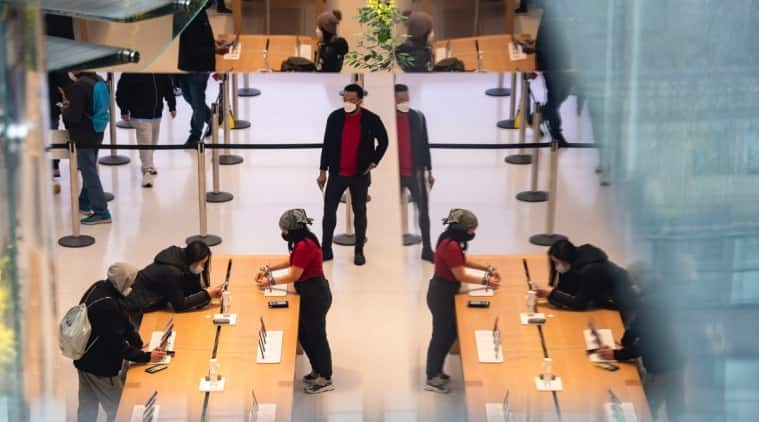 An Apple store in New York, Dec. 28, 2021. Apple was on track to be Twitter’s largest advertiser, spending over its committed 0 million for 2022. (Karsten Moran/The New York Times)

Musk did not respond to a request for comment.

Even before he completed his deal for Twitter, advertisers began expressing their doubts. Twitter had 3,980 advertisers in May, the month after Musk agreed to buy the company, according to MediaRadar, an advertising intelligence company. By October, it had 2,315 advertisers, the fewest of any month until that point.

Advertisers’ confidence in Twitter was shaken further when its sales and advertising team turned over after Musk took charge. Leslie Berland and J.P. Maheu, who were responsible for maintaining key relationships with some top brands, left last month. Robin Wheeler, a U.S. ad executive who briefly resigned before staying on, was then fired after Musk asked her to cut employees from the sales team and she refused, two people said.

Dara Nasr, who oversaw Twitter’s European ad operations, also left last month. The company’s ad sales in Europe, the Middle East and Africa were down more than 50% the week of Nov. 21 from the prior week, two people familiar with the numbers said. The Platformer newsletter previously reported Twitter’s figures for the region.

Musk also made good on his threat to call out advertisers that paused their spending. On Monday, he posted several barbed tweets about Apple and its CEO, Tim Cook, noting that the iPhone maker had pulled back its advertising on Twitter. Apple, which does not advertise on Instagram or Facebook, had committed more than $150 million on Twitter ads in 2022 and had exceeded that with more than $180 million in advertising spending, three people said.

But Apple temporarily paused that after a shooting left five people dead at an LGBTQ nightclub in Colorado Springs, Colorado, on Nov. 19, two people said. Major brands tend to dial back advertising when there are shootings or disasters so that their promotions do not appear next to news or tweets about the tragedies.

Musk suggested that Apple’s reduced advertising would lead to censorship on Twitter. “Apple has mostly stopped advertising on Twitter,” he tweeted. “Do they hate free speech in America?”

On Wednesday, Cook and Musk met at Apple’s Silicon Valley headquarters. Musk later tweeted that they had cleared up a “misunderstanding.” Apple did not respond to requests for comment.

Bamford said Musk’s behavior was beyond the pale. “There is no way to shame someone into advertising in an environment that is controversial and dangerous,” she said. “Yelling at people is not a plan.”

Other advertisers are concerned that their Twitter advertising data might be shared with Musk’s other companies. GM, the first brand to announce that it had paused its Twitter advertising in late October, sought assurances that its data would not be shared with Tesla, two people said. It also asked for a way to keep its information separate from systems that Tesla’s engineers had access to, they said, given that Musk had brought Tesla employees into Twitter to navigate the ownership change.

“It’s important for us to ensure our advertising strategies and data can be safely managed by a platform owned by a competitor,” a GM spokesperson said in a statement.