Following the report, the office of UK Chancellor of the Exchequer Rishi Sunak, who is son-in-law of Murthy, was forced to comment. 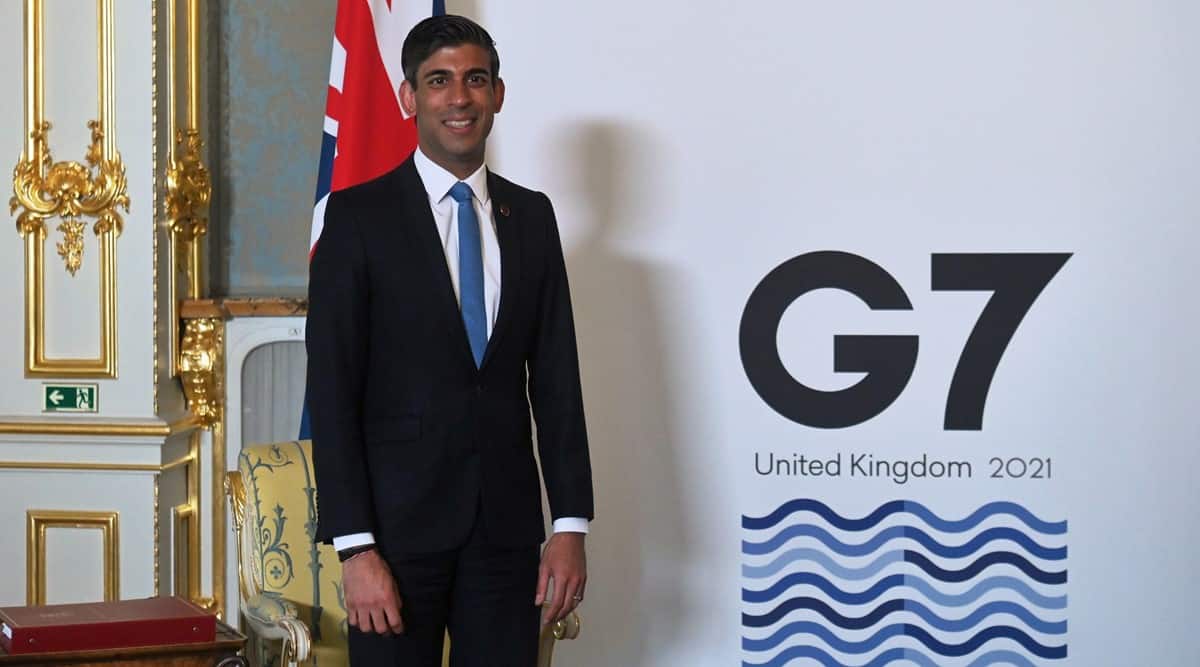 Britain's Chancellor of the Exchequer Rishi Sunak poses during a meeting of finance ministers from across the G7 nations at Lancaster House in London, Britain June 4, 2021. (REUTERS)

Amazon reportedly developed independent sellers such as Cloudtail, as ‘special merchant’ which enjoyed over 35 per cent of total sales on the platform until 2019.

While Murthy’s Catamaran Ventures indirectly holds 76 per cent in Cloudtail and Amazon the remaining 24 per cent, the firm’s two top posts – chief executive and finance director – were with the US retailer. Cloudtail’s holding company, Prione is also run by a former Amazon manager, the report in ‘The Guardian’ newspaper said.

It said that it is not known precisely what the tax dispute is about and the company said that it was contesting the bill, adding that since the “matter is sub judice, we are unable to comment any further”.

Following the report, the office of UK Chancellor of the Exchequer Rishi Sunak, who is son-in-law of Murthy, was forced to comment.

“Reaching an international agreement on how large digital companies are taxed has been a priority for the chancellor since he took office,” said a spokesperson for his UK Treasury office.

“The Chancellor’s consistent position has been that it matters where tax is paid, and any agreement must ensure digital businesses pay tax in the UK that reflects their economic activities. That is what our taxpayers would expect and is the right thing,” the spokesperson said.

Sunak has been dubbed the UK’s richest minister, largely as a result of his wife Akshata Murty’s family wealth. The latest ‘Guardian’ report claims that an analysis of Cloudtail’s accounts and activities shows that it is one of the largest sellers on Amazon.in, as part of a 76-24 per cent joint venture with Amazon.

“The company has received a show cause notice in the current year from Directorate General of Goods and Service Tax Intelligence amounting to INR 5,455 lakhs [~5.5m] along with interest and penalties for service tax-related matters,” it quotes Cloudtail’s most recent accounts as saying.

It claims that the annual report further reveals that Cloudtail – which only sells via the Amazon platform – paid Amazon fees of 95 million pounds last year, almost 10 times more than the Indian business reported in profit.

According to its analysis, Murthy created the venture capital firm Catamaran, a trustee of the Hober Mallow Trust, which ultimately owns the stake in Cloudtail and whose beneficiaries are the Murthy family.

“The whole structure raises questions if Cloudtail is really an asset of Amazon – and if the Murthys are the name lenders. The exact detail of the deal will only be known if the investigation agencies seek details of their shareholder agreements,” Rashmi Das, an author specialising in Indian e-commerce, is quoted as saying by the newspaper.

The questions around the control of Cloudtail also recently prompted the Confederation of All India Traders (CAIT) to ask the Indian minister of commerce, Piyush Goyal, in February to investigate the joint venture to discover why its key personnel have typically joined from Amazon.

In a letter to Goyal, found on CAIT’s Twitter account, it notes: “Even though Murthy holds the majority of shares, he has allowed the (so-called) former employees of Amazon on the driver’s seat of both Cloudtail and Prione… The role of Murthy requires appropriate investigation.”

Amazon maintains that it is operating in full compliance with local laws. However, last week the Indian competition commission got the go-ahead to relaunch an investigation into Amazon’s selling practices in India.

After a court ruling, the Competition Commission of India (CCI) will examine complaints by a traders’ group that small sellers are being driven out of business because the big US platforms are giving preferential treatment to “preferred sellers”.

Reached for comments, Cloudtail said it “has disputed the service tax claim by the authorities and the matter is before the adjudicating authorities. The company has been disclosing this as a contingent liability in its Annual Report since 2019 as per Indian Accounting Standards. Since this matter is subjudice we are unable to comment any further.”

On paying ‘meagre’ taxes over the past four years despite high revenues, it said, “Cloudtail aspires to be a leading online retailer in India. The e-retail industry is capital intensive and is a high-volume low margin business.”

“Cloudtail is an independent company that makes business decisions to protect its interests. Cloudtail is governed by a board of directors. Catamaran has a majority of the directors and therefore controls the Board. The members on the Board from Catamaran are high quality professionals with extensive business experience,” it said.

On the allegation of the structure of Cloudtail raising questions if it is really an asset of Amazon, the firm said, “Cloudtail has not violated any law of the land and is in full compliance with the law of the land in letter and in spirit. Murthy family has put in the required equity capital in Prione (parent company of Cloudtail), commensurate with its shareholding. The allegations are baseless and incorrect.”

A spokesperson for Amazon said: “Amazon in India has always been fully compliant with all Indian laws.

“Specifically, our joint venture with Catamaran, as well as our marketplace operations, are in compliance with Indian [foreign direct investment] laws, and that includes Cloudtail as a seller.”

Amazon India spokesperson said Cloudtail is one of the 8.5 lakh sellers selling on the Amazon.in marketplace. “No Amazon employees are working with Cloudtail.