Honda drives in all new City in India priced at Rs 10.9 lakh 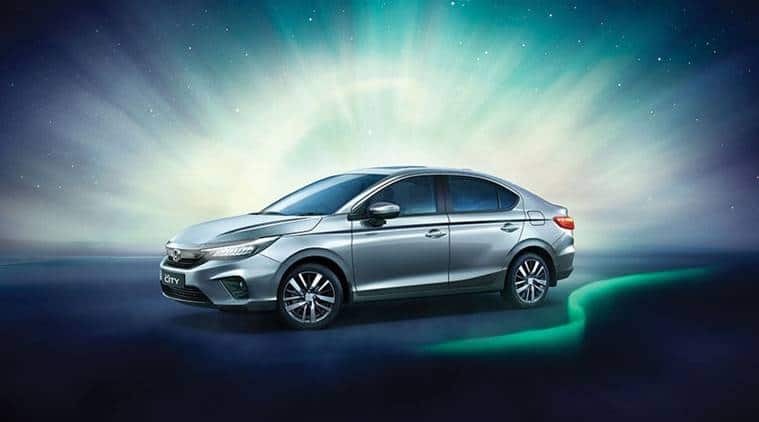 The company has sold 40 lakh City units cumulatively across the globe till date with around 8 lakh units in India. (Image source: Honda Car India)

The fifth generation version of the popular model, which in its current form is longer and wider than the fourth generation City, comes with BS-VI compliant petrol and diesel powertrains.

The model, which will compete with the likes of Hyundai Verna, Maruti Suzuki Ciaz and Skoda Rapid, now features smart devices ecosystem including Alexa remote capability and 32 connected features as standard feature across all variants with a five-year free subscription.

The company said it will also continue to sell the BS-VI compliant fourth generation City along with the new version.

“City is synonymous with Honda brand in India. It is the most important model for us,” Honda Motor India Ltd (HCIL) President and CEO Gaku Nakanishi told PTI.

Being a pillar of the company’s business in India for the last 22 years, the company expects the new City to bring in more volumes as compared to the last versions, he added.

The company has sold 40 lakh City units cumulatively across the globe till date with around 8 lakh units in India.

Each generation of the City has raised the bar on design, technology, quality, driving pleasure, comfort and safety, and has come with several industry firsts or segment first features, Nakanishi said.

“Our vision has been to offer our customers with a new value that is unprecedented in the history of City and we are confident that the All New City will create fresh excitement in the mid-size sedan segment,” he added.

Besides domestic market the company is also looking to enhance exports of the City to new markets, including left-hand car regions.

“Regarding City, we are looking at expanding the export volume. We are looking to more than doubling the overseas shipments,” Nakanishi said.

In 2019-20, the company exported around 3,800 units from India mainly to South Africa and some neighbouring countries.

Elaborating further HCIL Senior Vice President and Director Sales and Marketing Rajesh Goel said the exports will begin later this year and new destinations will be covered with the new City.

“We can’t disclose the export markets right now as all have their own launch plans. What we can tell that is that we are also going to start the export of left-hand cars,” he noted.

Commenting on the domestic market, Goel said: “We know SUV segment is growing here but with Civic we saw that it revitalised the segment in which it is offered, sales jumped. So, we are hoping that with City we will achieve similar results in the mid sized sedan segment”.

When asked about the logic of continuing the sales of fourth generation City with with the new version, Goel said the earlier version is also BS-VI compliant and has contemporary design language.

“We want to give broader choice to customers,” he noted.

The BS-VI petrol trims of the fourth generation City are priced between Rs 9.91 lakh-Rs 14.31 lakh.

Goel said the new City could be produced at both its Greater Noida and Tapukara (Rajasthan) plants and is currently being rolled-out of the former.

“Later, we can also roll it out from the Tapukara facility,” he said.

The new City has been developed at Honda R&D Centre located in Tochigi, Japan, following extensive market surveys in India, ASEAN countries and other markets for peoples driving needs and lifestyles.

The manual trims will return fuel efficiency of 17.8 km/litre while the CVT trims will deliver 18.4 km/litre, the company claimed.

The diesel trims, which will come with 1.5-litre engine mated to a six speed manual transmission, will deliver fuel efficiency of 24.1 km/litre, it added.

HCIL said it will start deliveries of the petrol variants of the model immediately across the country while the deliveries for the diesel variants would begin from next month.

The car offers low cost maintenance with service interval of one year or 10,000 km whichever is earlier, it added.

The City model is currently sold in 60 countries, The first generation Honda City was introduced in India in January 1998.