Mumbai: An attendant of a fuel station works as petrol prices cross the 100 rupees/litre mark in Mumbai, Saturday, May 29, 2021. (PTI)

Gasoline prices in India’s financial capital of Mumbai have risen past the 100-rupee-a-liter mark for the first time ever, among the costliest in the country and almost twice the price in New York.

Retail prices in the city are up 11% this year and reached 100.47 rupees ($1.39) a liter Monday, Indian Oil Corp data show. The equivalent price in the US financial center is $0.79, according to Bloomberg calculations based on figures from the New York State Energy Research and Development Authority. 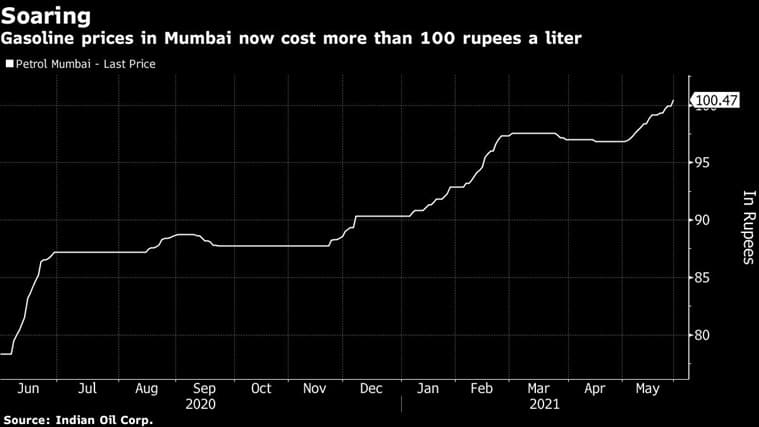 Indian fuel prices have soared in the past year as Prime Minister Narendra Modi’s administration has repeatedly raised sales taxes to cushion worsening public finances. Levies now make up around 60% of the retail price and federal taxes on gasoline and diesel have surged nearly six-fold since 2013.

The steep increase in taxes on the two fuels, which account for more than half of India’s oil consumption, comes as the Covid-19 pandemic pummels demand in the world’s third-biggest crude importer. Sales of the two fuels in May are about a third lower than pre-virus levels in 2019 as large parts of the nation remained under local lockdowns to battle the world’s worst coronavirus wave.

“I pray for the prices to soften or the government to reduce the taxes,” said N. Vijayagopal, finance director at Bharat Petroleum Corp, one of India’s three-biggest fuel retailers. Unless that happens, “we have no choice but to increase the retail selling prices,” he said.