Russia is a key member of the OPEC+ alliance and a major producer of crude and petroleum products such as diesel. Mounting sanctions on the nation are prompting supply fears, with fuel prices following oil higher. Oil continued its rally near $127 a barrel after President Joe Biden said the U.S. would ban the import of Russian crude, escalating efforts to hobble the nation’s economy that will further strain global energy markets.

Futures in New York have soared more than 35% since the invasion of Ukraine almost two weeks ago, and settled at the highest since 2008 on Tuesday. The U.K. said it would also phase out Russian crude imports by the end of the year, and Shell Plc and BP Plc are halting new purchases, but other European nations have been reluctant to commit to similar action.

The invasion has roiled commodity markets from metals to grains and sparked concerns that the global economy is heading for a shock just as countries emerge from the Covid-19 pandemic. Banks and traders are predicting even higher crude prices and already tight energy markets are being stretched. 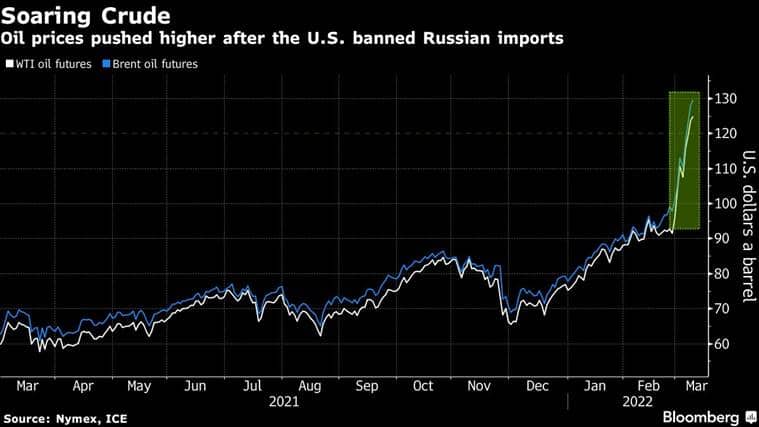 Russia is a key member of the OPEC+ alliance and a major producer of crude and petroleum products such as diesel. Mounting sanctions on the nation are prompting supply fears, with fuel prices following oil higher. American gasoline prices rallied to a record Monday, increasing the pain for consumers.

Oil imports from Russia made up about 3% of all the crude shipments that arrived in the U.S. last year. When other petroleum products are included, such as unfinished fuel oil, Russia accounted for about 8% of oil imports. A planned House vote on the legislation to ban imports was delayed, even as Biden moved ahead with executive action amid growing political pressure to do so.

“Europe is not following suit, quite simply because they can’t as yet,” said Jeffrey Halley, senior market analyst for Oanda Asia Pacific Pte. “That relieves some tension in oil markets. Brent crude will likely consolidate between $120 and $130 this week if the headline reel stays quiet.”

Brent remains in deep backwardation, a bullish structure where near-dated contracts are more-expensive than later ones, indicating tight supply. The global benchmark’s prompt spread was $4.80 a barrel in backwardation, compared with $3.02 at the start of last week.

Shell and BP said they won’t make any new purchases of Russian oil and gas, but won’t be able to immediately to disentangle themselves from the country in part due to long-term contracts. It’s a dramatic U-turn for Shell, which faced heavy criticism for its purchase of Russian crude last week.

The International Energy Agency said it was talking to oil producers about bringing on extra supply and that there was significant spare capacity that could be tapped. The IEA added that prices could go even higher.

Ukraine war update, March 9: How Europe deals with its dependence on Russian oil will be critical