Oil climbs near $106 after jumping on doubts over peace talks

Futures in New York rose to trade near $106 a barrel after jumping 8.4% on Thursday. Crude rallied after the Kremlin said a report of major progress in negotiations over Ukraine was “wrong,” but that discussions will continue. Workers climb down the stairs of a silo at the Hi-Crush Partners LP mining facility in Kermit, Texas, U.S., on Wednesday, June 20, 2018. (Bloomberg)

Oil extended gains after the biggest daily surge in 16 months pushed prices back above $100 a barrel as the Kremlin cast doubt on the progress of peace talks with Ukraine.

Futures in New York rose to trade near $106 a barrel after jumping 8.4% on Thursday. Crude rallied after the Kremlin said a report of major progress in negotiations over Ukraine was “wrong,” but that discussions will continue. Oil is still set for a second weekly loss after another tumultuous period of trading that’s seen West Texas Intermediate swing over $9 in three sessions.

The market has been whipsawed by developments surrounding the war and concerns about virus lockdowns in China, with a liquidity crunch adding to oil’s volatility and leaving prices vulnerable to big swings. Chinese President Xi Jinping pledged to reduce the economic impact of his Covid-fighting measures, offering some optimism that the hit to oil demand won’t be so severe. 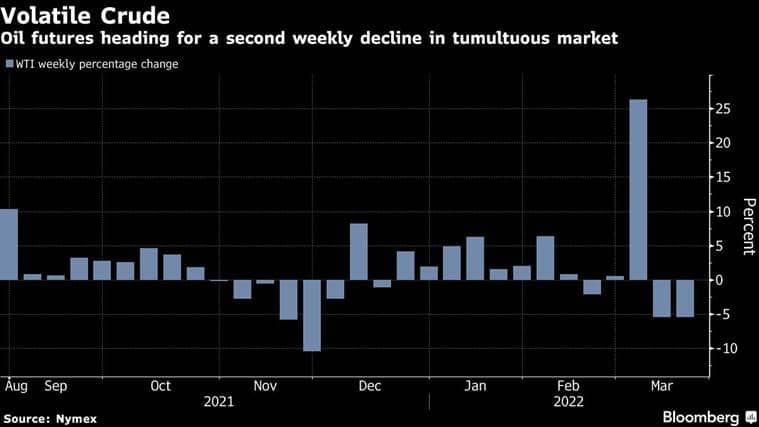 Russia’s invasion of Ukraine has fanned inflation, providing a challenge to central banks and governments as they seek to encourage economic growth after the pandemic. The Federal Reserve this week raised interest rates and signaled further hikes to tackle the fastest price gains in four decades.

“It seems to me that the market is just panicking and chasing its tail,” said Jeffrey Halley, a senior market analyst for Oanda Asia Pacific Pte. “We are going to get more intraday volatility. Oil is going to sit between $100-$120 a barrel, that’s going to be the rough range over the next month.”

On the supply front, Libya said Wednesday that OPEC should ramp up production faster to ease the energy crisis. Saudi Arabia’s Crown Prince Mohammed bin Salman told the Japanese Prime Minister a day later that the kingdom is keen to maintain the oil market’s balance and stability, state-run SPA reported.

Russian crude is still being treated with extreme caution by buyers worried about damage to their reputation or falling foul of sanctions. Since the invasion of Ukraine, the lion’s share of oil refining companies across Europe have said they will scale back purchases from Moscow.

Global benchmark Brent has swung by more than $5 a barrel for 16 consecutive sessions — the longest run of such volatility ever. The extent of the liquidation shows up in open interest figures. Holdings for WTI fell to the lowest since 2016, while those for Brent were the lowest since 2015.

This Holi, find out how you can recycle ragi thandai residue (recipe inside)