Golden days ahead for jewelers as India recovers from Covid-19

Jewelers are being further encouraged that sales volumes will rise due to a 17% decline in gold prices in the local markets since their record high last August, as the precious metal’s safe-haven value wanes amid a global economic recovery from the pandemic. 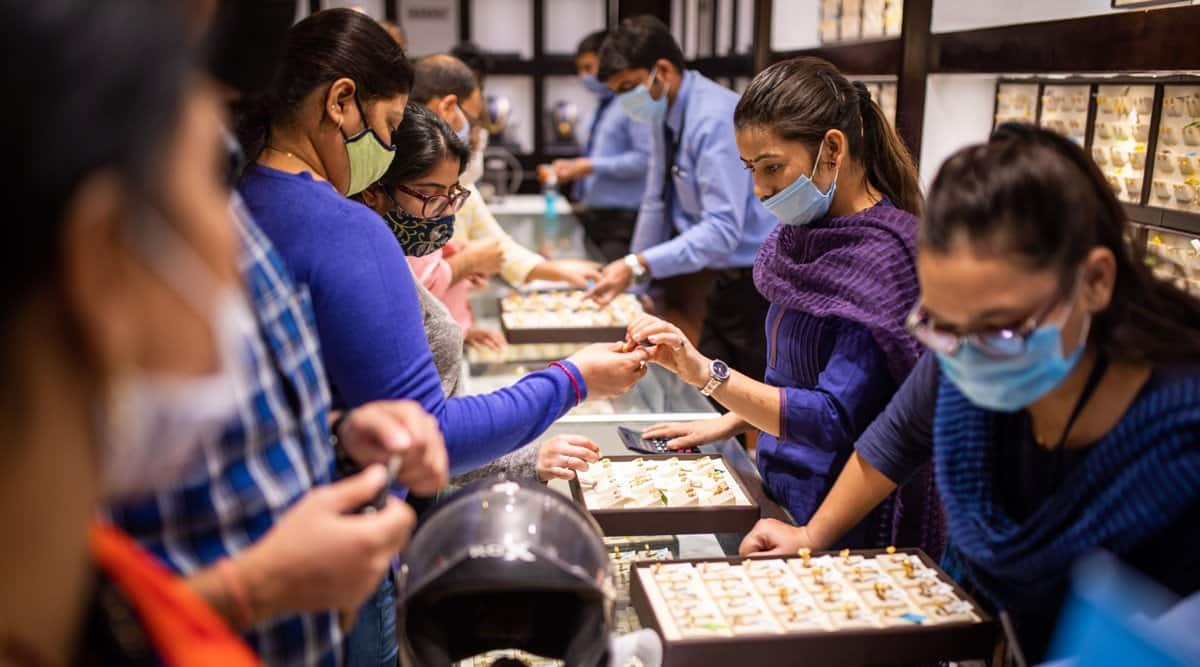 Customers shop for gold during the festival of Dhanteras in Noida, in Nov. 2020. (Bloomberg)

Wedding invites have been sent and the festival season is expected to be lively. That’s good news for India’s gold jewelers, as a reprieve in the pandemic means they can eye a recovery in their most lucrative sales period.

In the final quarter, Indians usually boost their purchases of gold ornaments for marriage celebrations, while sales of coins and bars for investment surge during a series of celebrations that culminates with Diwali, or the Festival of Lights that this year is being held in November.

But during the pandemic, they’ve mainly held back their spending on the precious metal as prices surged and restrictions of movement crippled the economy, delayed weddings and muted festivals. Now, daily-infection tallies around seven-month lows and climbing vaccination rates are boosting optimism of a better peak sales season.

Jewelers are being further encouraged that sales volumes will rise due to a 17% decline in gold prices in the local markets since their record high last August, as the precious metal’s safe-haven value wanes amid a global economic recovery from the pandemic. About 60% to 70% of India’s gold consumption is in the form of jewelry. The World Gold Council data shows that Indians bought 315.9 tons of gold-use jewelry in 2020, almost equal to the combined purchases in the Americas, Europe and Middle East. China is the biggest buyer at 433.3 tons.

According to Ashish Pethe, chairman of the All India Gem and Jewellery Domestic Council, pent-up demand and lower prices could boost last-quarter gold sales as much as 15% higher than in the same period two years ago.

“2020 was an aberration,” Pethe said of last year’s peak sales period. This quarter, gold prices “have mellowed down and are favorable; weddings are also very high in number.”

Bullion surged to a record last year on massive stimulus measures unleashed by central banks during the pandemic, which sparked a rush of investor money into exchange-traded funds. Investor demand for the precious metal is now waning as the Federal Reserve signals it could start scaling back asset purchases.

“In the absence of strong investor interest, the physical market will set the floor, and recent trade data points to key hubs responding to recent price drops in gold,” said Suki Cooper, an analyst at Standard Chartered Plc. India’s bullion imports have also surged and pent-up demand has been high as the market enters its peak buying period, she said. It wasn’t just during last year’s festival season that Indian purchases of gold fell. After declining to a more than two decade-low of 446.4 tons in 2020, sales could rise by as much as 50% for all of 2021, according to Chirag Sheth, a consultant with Metals Focus Ltd.

While warning that potential safe-haven factors remain that could drive up bullion — particularly the energy crisis which may lead to high inflation and impact global growth — Sheth said that “if prices remain where they are in the run up to the festival season, then sales will be good.”