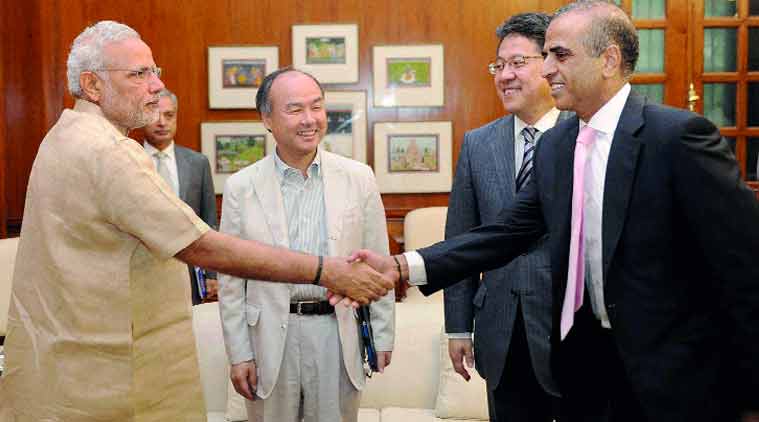 Japan’s SoftBank, Sunil Bharti Mittal-led Bharti Enterprises and Taiwan’s Foxconn Technology on Monday teamed up to form a joint venture (JV) to set up a 20 gigawatt (GW) of solar and wind energy projects in India at an investment of about $20 billion.

This would clearly be one of the biggest investment pledges to date in the country’s renewable energy sector. SoftBank, which owns one of Japan’s biggest mobile carriers and is the largest shareholder in Chinese e-commerce firm Alibaba, will have the majority control in the three-way JV company — SBG Cleantech — with Bharti and Foxconn as minority stakeholders.

“Softbank will take the lead and responsibility to make 20 GW as a minimum commitment in the solar space in India. In economic terms, grossly $20 billion will be the scale of investment, probably it could be one of largest investments by a foreign company in India,” Softbank chairman and CEO Masayoshi Son told reporters.

“Prime Minister Narendra Modi invited me to India during his visit to Japan earlier. We endorse and support the PM’s vision for 100 GW of clean energy by 2022. India has two times more sunshine than Japan and cost of constructing solar park is half that of Japan. That makes India four times more efficient in solar and wind energy than Japan,” the SoftBank CEO added.

Earlier in the day, Mittal and Son met Prime Minister Narendra Modi and discussed the way forward for the energy project.

“We cannot give a real timeline but we will be discussing with various state governments. The project will depend on various ground factors like land clearance, support from government agencies,” Son said.

Sunil Mittal said SBG Cleantech will be headed by Manoj Kohli as its executive chairman while Raman Nanda will be the chief executive officer. It will be headquartered in New Delhi.