The Centre’s move to increase the deposit limit of the project cost in a separate account from 50% to 70%, may help developers divert the majority of sales proceeds on buying additional land instead of completing the project at hand. 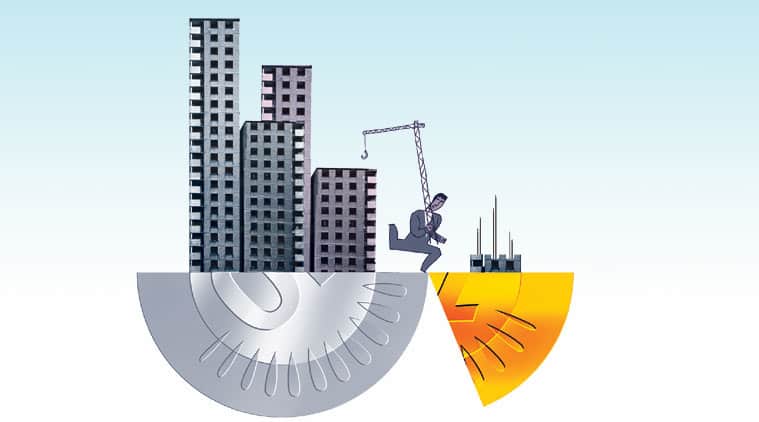 The 70 per cent that is to be kept aside includes land cost and not merely construction cost. (Illustration: C R Sasikumar)

The Union Cabinet has cleared the Bill to regulate the real estate sector while mandating that developers must deposit 70 per cent of the project cost in a separate account instead of the Parliamentary Select Committee recommended 50 per cent construction cost.

When it comes to getting builders to ensure that a stipulated portion of the sales proceeds is not squandered away on anything other the construction of the project, 70 per cent definitely sounds like a better deal. However, the seemingly harmless tweaking has sweetened the deal for developers as they can now easily divert a majority of sales proceeds and park it on aggressive land deals. This is a significant setback for consumers in a real estate market where project delays are endemic.

According to the Ministry of Housing and Urban Poverty Alleviation, the 70 per cent that is to be kept aside includes land cost and not merely construction cost. This means that in metros, where land accounts for a major chunk of the project cost, developers can withdraw much of this amount leaving pittance in the separate account for the purpose of construction. This withdrawn money can then be channelised into buying additional land instead of completing the project at hand for which the money was collected in the first place. In fact, the original Real Estate Bill (2013) mandated that 70 per cent or less, as notified by the state government, must be maintained in a separate account and used solely for construction.

Earlier this year, the NDA government proposed to reduce it to 50 per cent or less. Following protests by the Opposition, the original Bill and the proposed amendments were referred to the Select Committee.

Following detailed consultations with all stakeholders that include builders, financial institutions, residents’ associations, property lawyers, the panel proposed that 50 per cent or more of the sale proceeds must be “maintained in a scheduled bank to cover the cost of construction and shall be used only for that purpose”. This money was proposed to be withdrawn after it is certified by an engineer, an architect, and a chartered

accountant “that the withdrawal is in proportion to the percentage of completion of the project”.

Abhay Upadhyay, convenor of Fight for RERA (Real Estate Regulation Authority), said that while on the face of it, 70 per cent seems like a major pro-consumer measure, the catch lies in the inclusion of land cost in the money that is to be maintained separately. “This seems to be done to accommodate the realty industry lobby which has been demanding this all along,” said Upadhyay. Fight for RERA emerged as a coalition of 39 NGOs, residents welfare groups, housing activists and home-buyers groups across Indian cities to push the cause of having a regulator for the realty sector.

Upadhyay himself has been fighting for getting possession of a house in a renowned Kolkata-based residential project for the last ten years. “Even today, of the 850 units promised, only 400 have been constructed on site. If the Cabinet really wanted to introduce changes, it should have been a pro-consumer measure. For instance, as per the Bill, builders will be granted a one-year additional extension to finish their projects. They should have introduced some punitive measures so that this one-year extension is not sought needlessly,” he said. Industry figures available for the last seven years show that of the 25 lakh residential projects launched in eight cities in the country, 88 per cent have been delayed. The maximum delays have been reported in the National Capital Region-Delhi followed the Mumbai Metropolitan Region.

Developer Manohar Shroff from the Maharashtra Chamber of Housing Industry said that the Bill is a long overdue legislation that will weed out malpractices and unscrupulous builders from the industry. He added that it will bring in transparency and projects will be completed on time since the punitive measures include imprisonment of builders. “It would have been difficult for us to function had the Bill made it necessary to deposit 70 percent of the amount collected from buyers exclusively for the purpose of construction. It is much more beneficial if this amount includes land cost,” said Shroff.

The one sticking point aside, the legislation is expected to bring in much succour to consumers of an until-now unregulated realty sector with the ensuing credibility leading to better credit flows to the industry. Moreover the Ministry of Finance has agreed to consider giving ‘infrastructure status’ to the sector once the Bill is enacted which will greatly help developers bring down their prevailing high borrowing costs.

Highlights of the bill:

* States will have to set up one or more Housing Regulatory Authority and Appellate Tribunal and make rules for its functioning within six months. At each level, the cases have to be disposed of within 60 days.
* The legislation will be applicable to projects that are yet to receive a completion certificate and are over 500 sq. m or having 8 flats.
* Mandatory registration and public disclosure of details of all projects on the regulator’s website along with quarterly update on progress on site.
* The project will be automatically registered if the developer doesn’t get a response on his application within one month.
* Rules will have to provide for a model pact between builders & buyers.
* Even projects beyond urban areas will be under the regulator’s purview.
* Mandatory registration of real estate agents.
* Registration of projects can be extended by the authority for a maximum of 1 year in case reasons for project delay are found to be genuine.
* The registration can be revoked in case of builders indulging fraudulent practices among other reasons. In such cases, bank account of the project can be frozen and the money can be used for project completion.
* In case of needless delays, builders will have to pay same rate of interest as they levy on defaulting buyers.
* The permission of two-third buyers will be required in case the builder wants to make any changes to the original plans even if the planning body has sanctioned modifications.
* Developers are obliged to take insurance for their projects.
* Compulsory conveyance of property to home buyers within three months.
* Developers are liable for structural defects for a period of 5 years.
* Within three months of the majority of units in a project being allotted, buyers have to form an association so as to take over and manage common areas and facilities.
* It provides for a less obscure definition of ‘carpet areas’. Spells out that common areas include open parking which means builders can only allot stilt and basement parking.
* Chairmen and members of regulatory authorities and appellate tribunals are to be selected by a committee comprising the Chief Justice of High Court, the law secretary and the housing secretary. The chairmen, members cannot take up post-retirement jobs in private sector.
* Measure to promote single window project clearance, grading of projects as well as builders and digitisation of land records.
* In case of failure to adhere to the order of the appellate tribunal, builder can face imprisonment of up to three years and/or monetary fine while buyers and estate agents are liable for one-year imprisonment or/and a fine.
* Civil courts can’t take up the matters mentioned in the legislation. However, the aggrieved parties can approach the 644 consumer courts. Those dissatisfied with ruling of the tribunal can move the HC in 60 days.