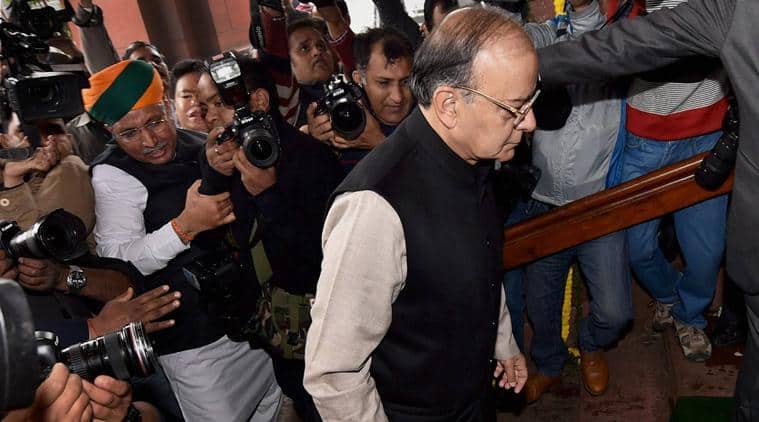 Finance Minister Arun Jaitley arrives in Parliament to present the Union budget for 2017-18, in New Delhi on Wednesday. PTI Photo

The government’s push for digital payments, which gained momentum after announcement of demonetisation, has continued with the Union Budget for 2017-18, in which an impetus has been provided to the apparatus needed for e-payments by removing various duties on these tools.

“To promote cashless transactions, I propose to exempt BCD, Excise/CV duty and SAD on miniaturised POS card reader for m-POS, micro ATM standards version 1.5.1, finger print readers/scanners and iris scanners. Simultaneously, I also propose to exempt parts and components for manufacture of such devices, so as to encourage domestic manufacturing of these devices,” Finance Minister Arun Jaitley said in his speech on Wednesday.

These devices witnessed a spurt in demand after November 8, when the government announced its decision to withdraw high-denomination currency notes. The Finance Ministry had earlier announced exemption of various duties on these items till March 31, which has now been extended.

Another key project of the Centre to push digital payments was introduction of an Aadhaar-based payment system called Aadhaar Pay, through which people without any of the electronic payment tools would be able to make cashless payments. Jaitley said that the system would be shortly launched. He added that the focus of the digital push would be on rural and semi-urban areas — through post offices, fair price shops and banking correspondents.

WATCH VIDEO | Personal Tax Slabs After Budget 2017: How Will Your Tax Come Down?

“A mission will be set up with a target of 2,500 crore digital transactions for 2017-18 through UPI, USSD, Aadhaar Pay, IMPS and debit cards. Banks have targeted to introduce additional 10 lakh new PoS terminals by March 2017. They will be encouraged to introduce 20 lakh Aadhar based PoS by September 2017,” he said.

The government is also working to strengthen the digital payment infrastructure and grievance handling mechanisms. A proposal to mandate all government receipts through digital means, beyond a prescribed limit, is also being considered by the Centre.

“The launch of Aadhaar Pay for people without mobile phones will spearhead the country’s transition to digital economy and perhaps make India a global exemplar in the digital arena. Renewed focus on taking digital to rural and semi-urban areas will further enhance digital inclusion, bridging the digital divide in the society and fostering financial inclusion,” said Neel Ratan, leader-government and public sector, PwC India.

In the Budget, the government has also withdrawn the service charge levied by IRCTC on online train ticket bookings. Following demonetisation, the share of cashless bookings for rail tickets rose to 68 per cent compared to 58 per cent earlier.

However, as recommended by various committees and sections of the industry, effective disincentives for low-value cash payments were missing from the Budget. The Chief Ministers’ panel on digital payments headed by Andhra Pradesh CM N Chandrababu Naidu had recommended re-introduction of the banking cash transaction tax to discourage cash payments, as also suggested by other panels in the past.