Budget 2019 India, Union Budget 2019-20 Speech Highlights: In line with the expectations, the Narendra Modi-led NDA government on Friday stepped up rural funding and dished out biggest income tax sops for the middle class in its last budget before the general elections. Presenting the interim Budget, interim finance minister Piyush Goyal announced a financial support package for marginal farmers that includes direct cash transfer of Rs 6,000 per year in three instalments. In a bid to wooing the middle class, the ruling dispensation also announced a full tax rebate for the salaried class for those with an income of up to Rs 5 lakh.

Explained: Key points of Budget 2019 and what they mean for you

The farmers scheme, known as Pradhan Mantri Kisan Samman Nidhi, will apply to only farmers with less than two hectares of land holding. This initiative will benefit 12 crore small and marginal farmers and will cost the exchequer around Rs 75,000 crore.

Union Minister Arun Jaitley slammed the Congress over its remarks on the interim budget. "What did the UPA do in their 10 years in power? A one time loan waiver of 70,000 crores. Only 52,000 crores were waived off & CAG report was that out of that Rs 52000 crore a significant part of money went to traders and businessmen & not to farmers," ANI quoted him as saying.

Jaitley is away in New York for medical treatment. In his absence, Piyush Goyal was given the charge of the finance ministry.

Union Minister Arun Jaitley: What did the UPA do in their 10 years in power? A one time loan waiver of 70,000 crores. Only 52,000 crores were waived off & CAG report was that out of that Rs 52000 crore a significant part of money went to traders and businessmen & not to farmers. pic.twitter.com/X79vJokZyj

Final jumla of Modi govt : it's interim budget too completely disappoints Delhi. Our share in central taxes remains frozen at Rs 325 crore & nothing earmarked for local bodies.
Delhi continues to be on its own financially.

Budget 2019-20: It is a testimony to the BJP’s fear and desperation about what that verdict of the people might be that it has sought to use what is an interim budget to make promises that are not for it to make. https://t.co/IUgMxJpcBi

Responding to the opposition's charge that government's scheme to support farmers translates just to Rs 500 per month, interim finance minister Piyush Goyal said the scheme has been introduced as a 'supplementary income'. "They are our 'anndaata' and provide us food security. Sitting over here it is very difficult to imagine how important this Rs 6000 is in the life of a small farmer," the interim finance minister told ANI.

Union Home Minister Rajnath Singh hailed the interim Budget as historic which he said is not only development friendly but also pays special attention to the middle class, farmers, workers in unorganised sector and the other vulnerable sections of our society.

Congratulating the Prime Minister Narendra Modi and the interim Finance Minister Piyush Goyal, Singh said that the announcement of exemption from income tax to people with income up to Rs 5 lakh and another Rs 1.5 lakh in investments totalling Rs 6.5 lakh will have a major impact on the lives of the middle class in general and salaried class in particular.

All Indian Kisan Sabha (AIKS) Maharashtra general secretary Ajit Nawale said the central government's announcement of giving Rs 500 per month to farmers owning land less than five acres is a cruel joke. "The condition of less than five acres land has also deprived many farmers from availing the benefits of the scheme. The farmers who have more than five acres but non-irrigated land with less income and are distressed due to the farm loans have been completely kept out of the scheme," he said.

"The farmers were expecting the budgetary allocations for the complete farm loan waiver and for the minimum support price. Besides, the farmers were also hoping for some relief to deal with natural calamities such as drought and irrigation. It was felt that the BJP's defeat in the recent state elections might force it to take some concrete steps in the budget on these issues. Sadly, it hasn't happened and has disappointed farmers again," Nawale added.

For years, many initiatives have been initiated for farmers but sadly, lot of farmers never came under the ambit of these schemes. The PM Kisan Nidhi will help those farmers who have under 5 acres of land. This scheme is a historic step for farmer welfare.

We have taken care of the animal husbandry sector, fisheries in the budget: PM Modi

From middle class to farmers, everyone has been taken care of in this budget: PM Modi

This is a #BudgetForNewIndia and for all Indians. Watch my take. https://t.co/eAsPXMk1Dr

Over 12 crore farmers and their families, over 3 crores salaried professionals and their families will gain, thanks to the budget. It is good to see more people being removed from the shackles of poverty. Our Neo-middle class is rising and so are their dreams: PM  Modi

From housing to healthcare, several aspects have been touched in the budget. The development initiatives of the NDA government have touched several lives: PM Modi

When Ramdas Athawale wanted to recite poetry during Budget speech

Union minister Ramdas Athawale is known for his impromptu delivery of poems and couplets. On Friday, when Finance Minister Piyush Goyal was concluding his Budget speech with a couplet in Lok Sabha, Athawale was on his feet eager to recite a poem. He was, however, asked by BJP ministers not to disturb Goyal during his speech.

Thrice, Athawale also drew the attention of Congress president Rahul Gandhi during the Budget when Goyal announced sops for middle class and farmers.

5 years of your incompetence and arrogance has destroyed the lives of our farmers.

Giving them Rs. 17 a day is an insult to everything they stand and work for. #AakhriJumlaBudget

5 years of your incompetence and arrogance has destroyed the lives of our farmers.

Giving them Rs. 17 a day is an insult to everything they stand and work for. #AakhriJumlaBudget

Govt acted recklessly and in violation of constitution: Chidambaram

"It is crystal clear that the government has no hope of returning to power and has acted desperately and recklessly and in violation of the Constitution," says Chidambaram on #Budget2019@IndianExpress 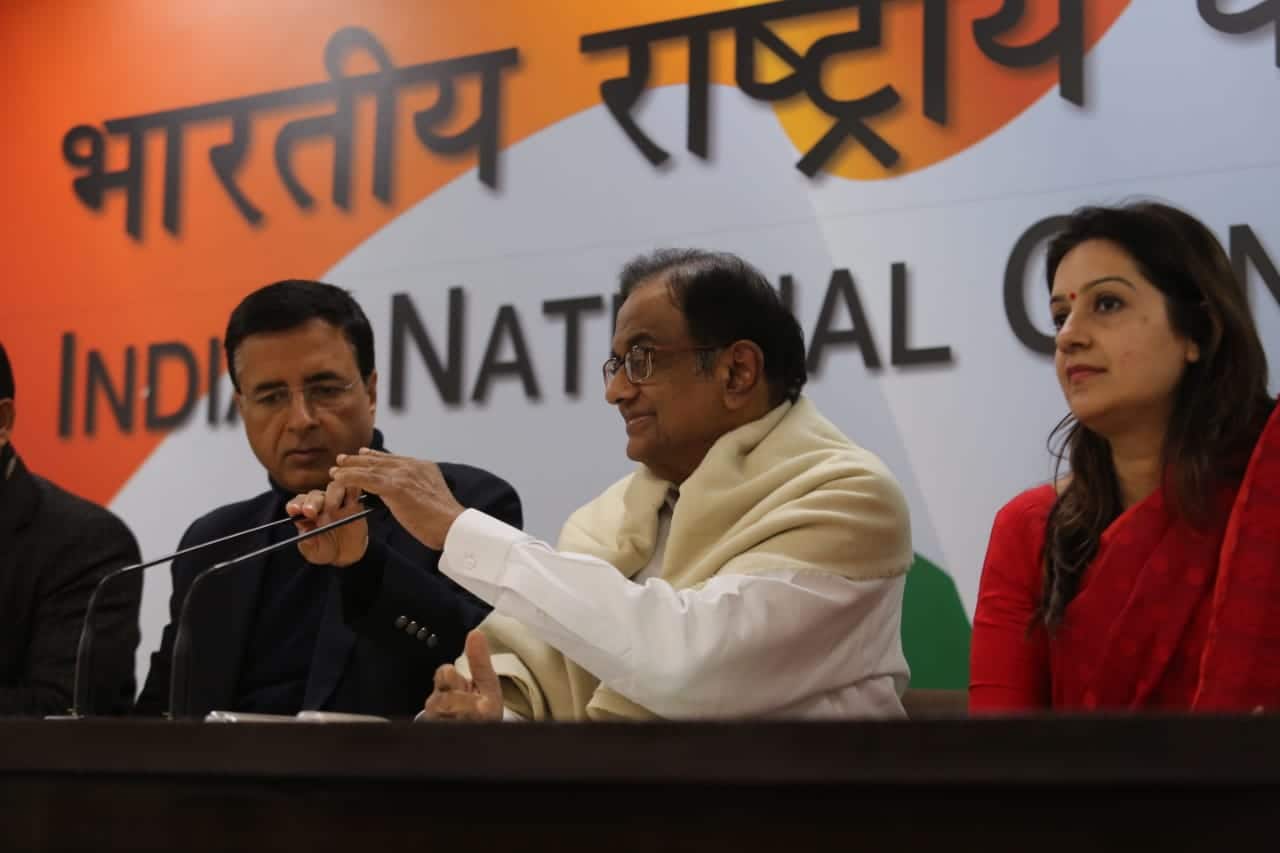 Finance Minister Piyush Goyal presented the interim Budget 2019 in the Lok Sabha Friday. He announced some major announcements, including income support for marginal farmers and a full tax rebate for the salaried class for those with an income of up to Rs 5 lakh. Read the full text here

Piyush Goyal: Those sitting in AC rooms cannot understand the plight of the small farmers. Keeping this in mind, we have introduced Pradhan Mantri Kisan Samman Nidhi scheme. This is a historic decision.

Govt wagers on growth, worries less about fiscal deficit: more money in the hands of people should boost demand. A marginally higher fiscal deficit is ok, if it aids economic growth @IndianExpress

I congratulate the Prime Minister and Finance Minister for this historic Interim Budget which is not only development friendly but also pays special attention to the middle class, farmers, workers in unorganised sector and other vulnerable sections of our society.

The announcement of exemption from income tax to people with income up to Rs 5 lakh and another Rs 1.5 lakh in investments totalling Rs 6.5 lakh will have a major impact in the lives of middle class in general and salaried class in particular.

Significantly, on the eve of the budget, a leaked report of the National Sample Survey Office’s (NSSO) job survey for 2017-18 showed that unemployment has surged to over 6 per cent in 2017-18, the highest since 1972-73. The unemployment numbers set off a political firestorm with the Congress and BJP trading barbs.

While Niti Aayog called it a “draft report,” former acting National Statistical Commission (NSC) Chairman P C Mohanan, who resigned earlier this week because the report wasn’t released, rebutted the claim and told The Indian Express that this was the “final report” and it needed no further approval.

The unemployment rate stood at 7.8 per cent in urban areas as compared with 5.3 per cent in rural areas, while the labour force participation rate, which is the proportion of population working or seeking jobs, declined to 36.9 per cent in 2017-18 from 39.5 per cent in 2011-12, the report said.