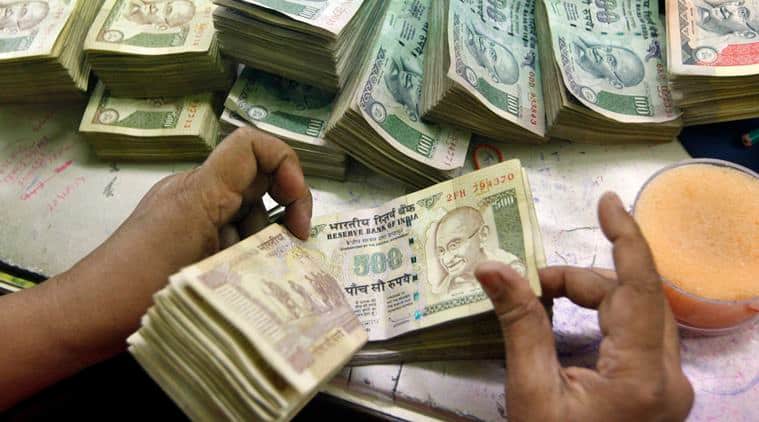 Data provided by PSBs, in response to RTI shows that the amount written off by SBI and Bank of India is 250 per cent more than that by 14 other banks in the last three years. (Source: Reuters)

The State Bank of India (SBI), the largest government bank, has written off over Rs 41,640 crore as non-performing assets (NPAs) in the last 10 years but failed to recover even one-third of this amount in the same period from bad loan accounts. Since 2011, the SBI’s write-off has jumped 15 times and in 2014-15, its NPAs were more than at least 14 other public sector banks (PSBs).

The Bank of India, a much smaller bank and fourth largest in terms of assets, wrote off more than Rs 41,361 crore in six years, indicating this amount could be much more than SBI’s write-off for 10 years. The Bank of India has said it does not have information on loans written off before 2009-10. From its bad loan accounts, it could not recover Rs 14,000 crore.

Data provided by PSBs, in response to Right to Information (RTI) applications filed by The Indian Express, show that the amount written off by SBI and Bank of India is 250 per cent more than that by 14 other banks in the last three years. While recoveries made in written-off accounts in a particular year may be from current and old bad loan accounts, data show that the process of recoveries has been sluggish, and in some cases, slumped to as low as 13 per cent of the total write-offs for a particular year.

The Indian Express filed individual RTI applications with 28 PSBs but some banks such as Canara Bank, Indian Overseas Bank, Indian Bank and UCO Bank did not provide information, claiming exemption under the RTI Act. While some said they do not maintain year-wise data, others claimed exemption citing “commercial interests”. All banks refused to disclose details of defaulters with loans of Rs 100 crore and more, contending they have a “fiduciary relationship” with clients and “no public purpose” will be served by such disclosures.

Taking suo motu cognisance of The Indian Express report on PSBs writing off Rs 1,14,000 crore in the last three years, the Supreme Court directed the RBI to submit a list of defaulters who owe Rs 500 crore or more to the banks. Adducing the list, the RBI said it was “extremely necessary” to keep these names confidential due to their “fiduciary relationship”. 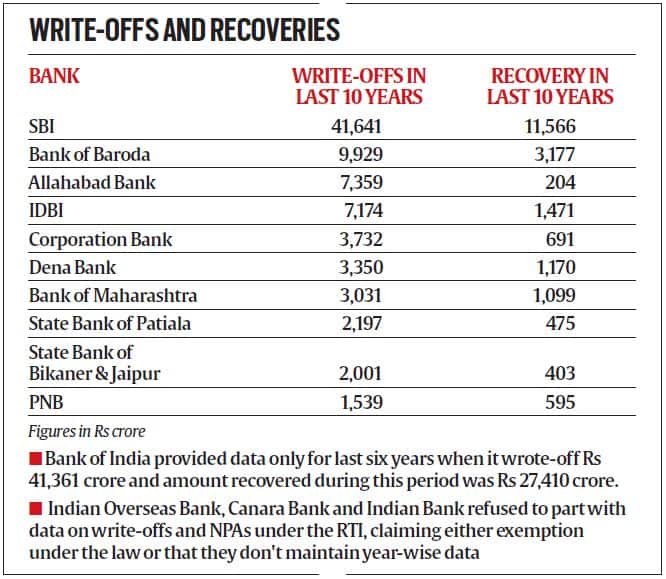 But data collected through RTI applications contradict claims made by the Finance Ministry, Reserve Bank of India (RBI) and SBI that the write-offs are merely technical accounting entries to clean up balance sheets, and that recoveries are actively pursued even after the writeoffs. In response to The Indian Express report, published on February 8, about the Rs 1,14,000 crore write-off, the Finance Ministry, RBI and SBI sent separate letters to the newspaper, maintaining that the write-offs did not mean all was lost.

Data pertaining to 24 PSBs for the last 10 years, however, corroborate that the process of recoveries has been indolent — the amount recovered from current and old bad loan accounts constitute less than one-third of the total write-off for any year even as the government kept shoring up these PSBs through equity capital and other measures.

Between 2012 and 2015, the SBI and Bank of India cumulatively wrote off Rs 55,702 crore whereas 14 other banks, including Punjab National Bank, Bank of Baroda, IDBI, Corporation Bank, Dena Bank and Allahabad Bank, classified less than half this amount — Rs 21,724 crore — as NPAs.

Accounting for the last ten years, the write-off by SBI was a little less than the amount written off by 14 other PSBs while Bank of India assumed the same position after computation of its write-off in the last six years.

Data from 16 banks show that the write-off by SBI and Bank of India stand at more than Rs 83,000 crore in the last ten years whereas it is around Rs 44,850 crore for 14 other PSBs.

A bench led by Chief Justice T S Thakur is likely to hear the matter on April 12 when it will also take up the RBI’s plea to keep the defaulters’ list confidential. While issuing notice to the regulator, the bench had remarked: “People are owing thousands of crore to the public banks… it is a big fraud. Top ten public sector banks have written off Rs 40,000 crore alone in 2015. It is all there in this Indian Express report. Public financial institutions are lending money despite knowing no returns. RBI is supposed to keep a watch on these banks. What are you doing about it?”

(Tomorrow: Who writes off depends on which bank you ask)

On the cards in Mohali parks: Yoga huts and new swings