Bank Strike Today HIGHLIGHTS: Banking operations in some parts of the country are affected as two employee-unions are observing a nation-wide strike today. Services like cash deposit and withdrawal at the counter and cheque clearances have been hit due to shortage of staff.

However, branches of public sector banks in urban areas are operational. Most of the banks including the country’s largest lender, State Bank of India (SBI), have already informed customers that the strike would have minimal impact on their operations. “The membership of our bank employees in unions participating in strike is very few, so the impact of strike on banks operation will be minimal,” SBI said in a filing to stock exchanges last week.

All India Bank Employees’ Association (AIBEA) and Bank Employees Federation of India (BEFI) have called for the strike from 6 am on Tuesday till 6 am on Wednesday in protest against the recently announced bank mergers, falling deposit rates and outsourcing of jobs. The unions said they are opposed to outsourcing of regular banking jobs and privatisation of the banking industry. They called for an increase in recruitment of clerical and sub-staff and stringent steps to recover mounting bad loans.

Services like cash deposit and withdrawal at the counter and cheque clearances have been hit due to shortage in banking staff.

Bank services in Kolkata hit as unions protest against mergers 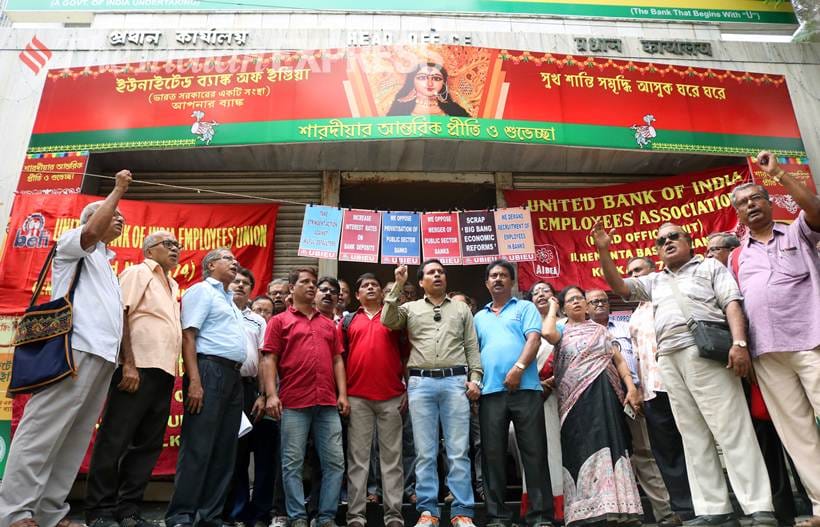 Photos | Some of the employees’ unions of public sector banks (PSBs) observe nation-wide strike to protest against the merger of 10 nationalised banks.

Banking services partially affected due to strike by employees

Banking services remained affected on Tuesday as employees of state-run banks are on a nation-wide one day strike to protest against the government's mega-merger plan. In August, the government announced a plan to merge 10 public sector lenders into four to create fewer and stronger global-sized banks.

It had announced four new sets of mergers of state-run banks-- Punjab National Bank taking over Oriental Bank of Commerce and United Bank of India; Syndicate Bank merging with Canara Bank; Union Bank of India will amalgamate with Andhra Bank and Corporation Bank; and Indian Bank will merge with Allahabad Bank. PTI

What are the upside and downside of bank merger?

Minister Nirmala Sitharaman last month announced the government’s decision to merge 10 state-owned banks to create four large entities or lenders. Under the plan, Oriental Bank of Commerce and United Bank of India will be merged with Punjab National Bank; Canara Bank with Syndicate Bank; Andhra Bank and Corporation Bank with Mumbai-based Union Bank of India; and Allahabad Bank with Indian Bank. That will mean a consolidation of banks in India from 27 before 2017, to 12 after the merger goes through. What are the upside and downside of this move? Read more...

Members of All India Bank Employees Association and  Bank Employees Federation of India, protest against the proposed merger of Public sector banks in Bengaluru.(Photos: ANI) 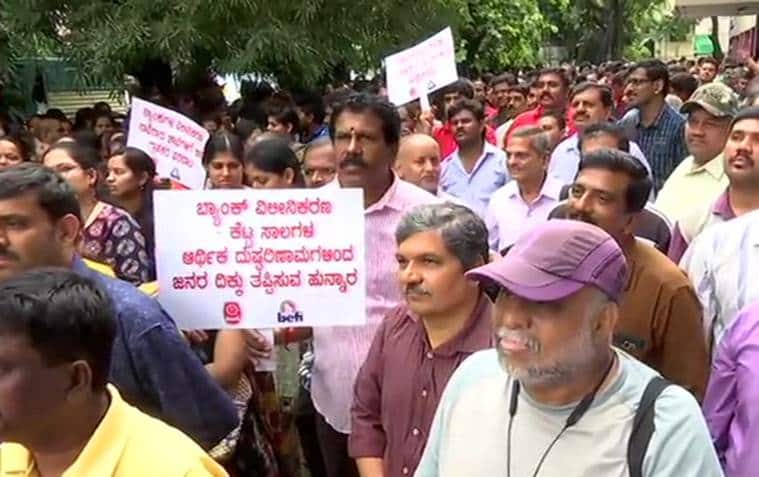 “The government’s decision is most unfortunate and totally unwarranted. All the banks which are facing closures, namely Andhra Bank, Allahabad Bank Syndicate Bank, Corporation Bank, United Bank of India and Oriental Bank of Commerce are well performing banks and have been greatly contributing to the nation’s economic development,” said a joint statement from central trade unions.

“Hence our call for strike stands. We exhort all our unions and members all over the country to go ahead with the strike,” he said.