Could air someday power your flight? Airlines are betting on it

New technologies, including one fuel extracted from the atmosphere itself, could make flying more sustainable. But the challenges are many and the timeline is uncertain. 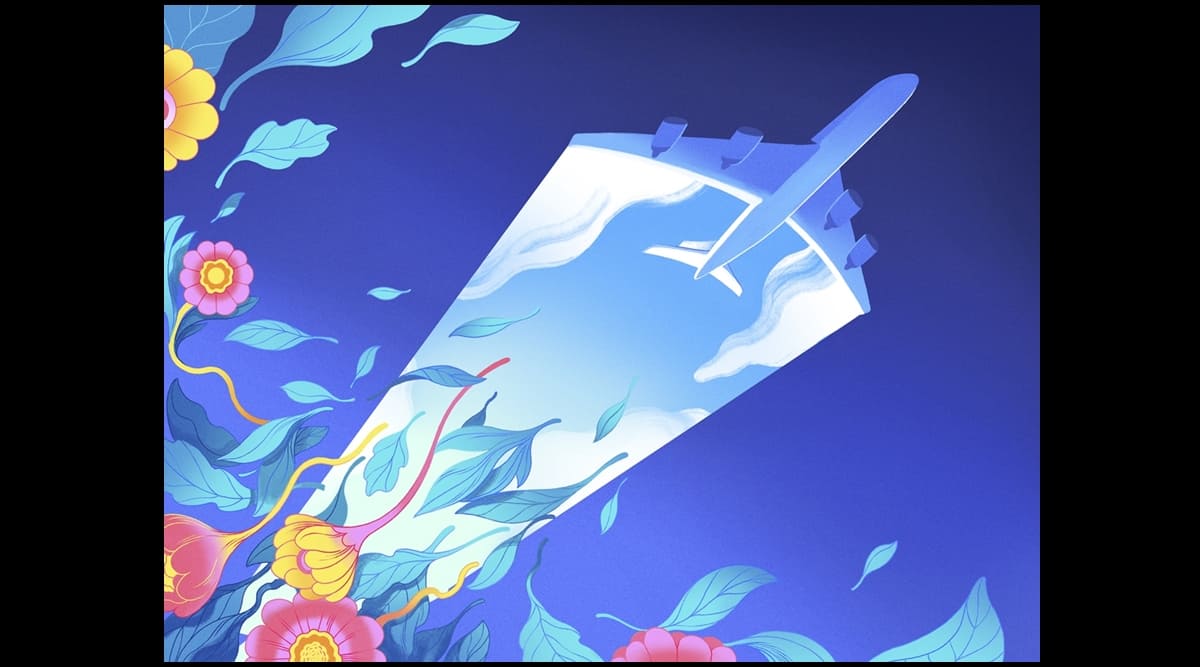 In the years leading up to the pandemic, aviation emitted roughly a billion metric tons of carbon dioxide annually, about as much as the entire continent of South America in 2021. (Rune Fisker/The New York Times)
Listen to this article
Could air someday power your flight? Airlines are betting on it
x
00:00
1x 1.5x 1.8x

By the middle of this century, most cars and buses should be powered by renewable energy, while bikes, electric trains and your own two feet will continue to have little impact on the climate. And if global aviation achieves the goal it adopted last year, then your 2050 flight from New York to Hong Kong will result in “net zero” carbon dioxide in the atmosphere.

There’s no guarantee that the industry will get there, but the technologies being developed in pursuit of the target will change aviation, regardless of whether the goal is met.

In the years leading up to the pandemic, aviation emitted roughly a billion metric tons of carbon dioxide annually, about as much as the entire continent of South America in 2021. And the figures are bouncing back as passengers return to the skies. But major airlines, including six of the largest U.S. airlines, have pledged to achieve net-zero carbon emissions by 2050, if not sooner. At a meeting in October of the United Nations agency dedicated to civil aviation, delegates from 184 countries adopted net zero by 2050 as a “long-term global aspirational goal.”

“Aspirational” is the operative word. Aviation is what experts refer to as a hard-to-abate sector, meaning there aren’t currently any easy, market-ready technologies that can drastically reduce its carbon emissions. And the “net” qualifier attached to the goal means that airlines can account for any CO2 they continue to emit either by using traditional carbon offsets, a practice that has attracted major criticism, or by capturing carbon dioxide directly from the atmosphere.

Scientists have also found that contrails — the wispy, short-lived clouds that sometimes appear in an airplane’s wake — affect the planet’s temperature, perhaps even more so than the carbon dioxide they release. It all adds up to a complex picture, especially given that global demand for aviation is expected to double over the next 20 years.

But new technologies are in the works, including hydrogen-powered aircraft, fully electric planes and synthetic jet fuel made from carbon extracted from the atmosphere. Several airlines have already begun adding a small amount of cleaner-burning biofuel — known in the industry as sustainable aviation fuel, or SAF — to their normal fuel supply, a trend that should accelerate. Many companies are getting out ahead of government regulations, investing in emissions-saving efficiency improvements while also, in some cases, making big bets on long-shot innovations that could dramatically reduce emissions in the future.

“We have to start now,” said Steven Barrett, a professor of aeronautics and astronautics at the Massachusetts Institute of Technology, and the director of the MIT Laboratory for Aviation and the Environment. “There’s such huge inertia in the system that you really have to start decades ahead.”

But movement isn’t happening as quickly as it could, said Pedro Piris-Cabezas, senior director for global transportation and lead senior economist at the Environmental Defense Fund, a New York-based nonprofit environmental group.

He noted that delegates at the October meeting had yet to adopt a concrete plan to achieve their 2050 goal. “We need these near-term and medium-term goals to start becoming more stringent,” Piris-Cabezas said.

Airlines are investing in improvements that can deliver relatively quick wins: retiring older aircraft, finding more efficient routes, having their planes taxi with only one engine running. But such measures go only so far.

Another short-term innovation is sustainable aviation fuel, a type of biofuel that’s most often made from used cooking oil and similar biomass. Over its life cycle, SAF can produce less carbon dioxide than conventional jet fuel, with which it may be blended. But SAF production remains limited and it is expensive, so airlines have been moving slowly, mixing small amounts into their existing fuel supply at select locations.

But enthusiasm inside the industry is high.

“We love SAF as an industry,” said Sara Bogdan, head of sustainability and environmental and social governance at JetBlue Airways. Bogdan said SAF is mixed into the fuel supplies of JetBlue flights departing from international airports in San Francisco and Los Angeles. The choice of airports is no accident: One of the few major suppliers of SAF has a production facility in California, and the state has introduced a low-carbon fuel standard that encourages SAF and other alternatives.

United Airlines has also focused on some of its California flights when it comes to using SAF. Lauren Riley, the company’s chief sustainability officer, said that SAF had been mixed into the fuel of every United flight that had departed from Los Angeles International Airport since 2016, and from Schiphol Airport in Amsterdam since last spring. United has also brought together a group of companies — including Deloitte, Nike and Siemens — that pay to help the airline cover the additional cost of SAF for their business travel.

“If you went out and bought sustainable aviation fuel, it would be two to four times more expensive than the cost of conventional jet fuel,” Riley said. “We cannot afford that on our own.”

Riley added that in any given year, SAF accounts for less than 0.1% of United’s total fuel supply — a figure that holds true across the industry. United and JetBlue are among the more than two dozen airlines that have joined a coalition, led by the World Economic Forum, that has pledged to make SAF account for 10% of aviation’s fuel supply by 2030.

But Piris-Cabezas warned that it is critical to guard against the risk that, for example, the supposedly used cooking oil in SAF production isn’t actually fresh palm oil that has never seen the inside of a kitchen. In such a situation, he said, biomass-based SAF could actually have a negative impact by promoting the clearing of forests for monoculture plantations.

“It’s extremely important that we make sure that we have a system that is robust, that has traceability and that only incentivizes high-integrity fuels that are not going to have these negative impacts on forests,” said Piris-Cabezas, who classified the SAF now in circulation as “untransparent,” and noted that consumers could press their airlines for greater clarity.

Power from the atmosphere

Transparency aside, there’s an important barrier to producing huge volumes of SAF, said Andreas Schäfer, director of the Air Transportation Systems Laboratory at University College London: We don’t have nearly enough used cooking oil and similar biomass residues to produce anything close to the amount of fuel that aviation requires. (Schäfer added that SAF is a misnomer: “It should be more-sustainable aviation fuel,” he said, because the fuels still emit carbon dioxide.)

Scientists are exploring alternative sources of carbon for SAF, including algae, yard trimmings and food waste. But perhaps the most intriguing potential source is the air we breathe, which, of course, is full of carbon dioxide.

Researchers have developed the technology for this process, known as “power to liquid.” It uses enormous fans to scrub carbon dioxide from the atmosphere, then extract the carbon from the CO2 molecule before combining it with hydrogen produced from water electrolysis that’s powered by renewable energy. The result is a hydrocarbon that can be used to power an airplane.

“It’s promising,” Schäfer said, “because there has been some quite rapid development in this area. The key challenge is the high cost.”

That cost is mainly because of the enormous amount of clean energy required to produce the fuel in significant volumes. But the cost of renewable electricity is falling so quickly that by 2035, “power-to-electric” fuel could be cheaper to produce than most SAF made from biomass.

Another innovation has been on the radar since at least the Cold War: hydrogen-powered aircraft. But the engineering challenges here are significant. Hydrogen as a gas is too voluminous to be stored in useful quantities on board an airplane, so it has to be cooled to minus 253 Celsius, or about minus 423 Fahrenheit, the temperature at which hydrogen condenses into a liquid. Cryogenic infrastructure for fueling and storage would also need to be built at airports around the world.

But the technology exists: NASA and the European Space Agency have long used it successfully, and researchers at companies such as Airbus and Rolls-Royce are working to adapt the technology for commercial aviation.

“With hydrogen, you can actually get to the point where you have zero carbon emissions,” said Lahiru Ranasinghe, senior sustainability manager at easyJet, a European low-cost airline that is investing in hydrogen-powered technology.

Electric-powered flight is another low-carbon option. Because of the current limitations of the batteries that power their engines, fully electric aircraft lack the energy to propel large planes over long distances, but they could offer a solution for smaller planes flying shorter routes. On this front, Norway appears to be leading the way: According to Avinor, the Norwegian airport operator, all of the country’s domestic flights should be fully electric by 2040. Wideroe, a Norwegian regional carrier, plans to have its first fully electric aircraft in service by 2026.

The aviation industry has focused on cutting back on carbon, but several academics say that there is a low-hanging fruit in terms of reducing the climate impact of flying. It turns out that contrails have a profound impact on the planet’s temperature.

“At a very high level, we’ve known for more than 20 years that contrail warming has been very significant — and comparable to CO2,” said Barrett of MIT.

The science is complicated, Barrett said, because their effect depends on the time of day. At night, contrails trap heat radiating off the earth, leading to additional warming. But during the day, contrails also radiate the sun’s energy back into the atmosphere and can actually have a cooling effect. But studies have shown that the overall impact is one of significant warming — anywhere from half to three times the effect of the aviation industry’s carbon dioxide emissions.

Barrett is working with Delta Air Lines to study how making slight shifts to flight routes could help. He says there is potential for easy wins: Contrails form only in specific conditions (when it’s cold and humid) and at narrow bands in altitude. That means that it’s relatively easy — and cheap — for airlines to reroute their planes to avoid them.

“Eliminating contrails is quite a big lever on mitigating the climate impact of aviation,” he said.

David Victor, a co-director of the Deep Decarbonization Initiative at the University of California San Diego, echoed the importance of addressing the warming impacts of contrails, as did Schäfer at University College London.

But with regard to the industry’s efforts to cut out carbon, Victor argued that in an ideal world, the carbon offset market would be out of the picture.

“The track record in demonstrating quality is so atrocious,” Victor said of traditional carbon offsets. “You’ve got all these garbage offsets that have been flooding into the market. That’s been driving down the overall price, and also driving down the quality.”

Victor suggested that concerned travelers could use an online carbon footprint calculator to see how their flying habits fit into their overall impact on the climate. But he stressed that individual decisions will make a difference only at the margins; the whole system needs a radical change, he said.

“If we do all this in a way that makes us miserable, then that’s not sustainable,” Victor said. “It’s got to be something that the whole of society is going to do.”