Christians, Hindus and Dalits consume beef legally in seven states of the North-east, Kerala, Goa, Karnataka & West Bengal. Will they also be de-nationalized along with Muslims? 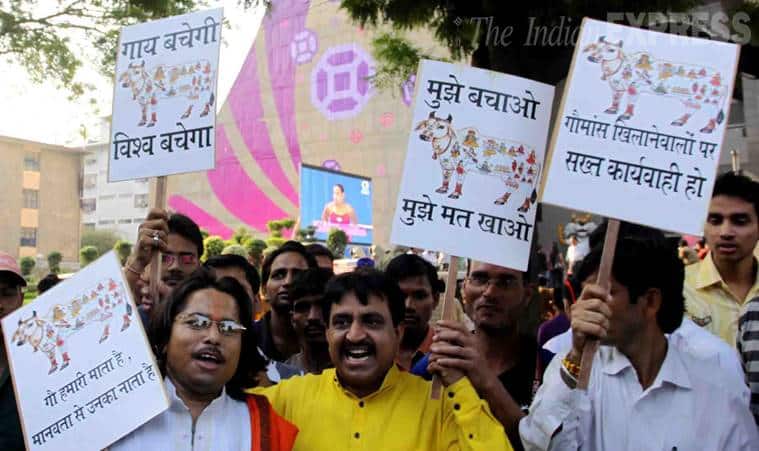 The Manusmriti which RSS wants as the constitution of India replacing the present Indian Constitution, in its chapter V mentions recipes of how different kinds of meats should be cooked/processed. Express Photo/Purushottam Sharma

The worst part about any debate on political/social/religious issues in India is that you introduce a Muslim dimension to it and the whole discourse will turn into an emotive issue. This situation has greatly aggravated with ‘swayamsevaks’ ruling a democratic-secular India. Currently it is happening on the issue of beef. The Hindutva camp is using it to demonize India Muslims by arguing that consumption of beef started with the arrival of Islam/Muslims in India. This thesis was laid out by MS Golwalkar, the most prominent ideologue of the RSS in 1966 when he said: “It began with the coming of the foreign invaders to our country. In order to reduce the population to slavery, they thought that the best method to be adopted was to stamp out every vestige of self-respect in Hindus. They took to various types of barbarism such as conversions, demolishing our temples and mutts. In that line cow slaughter also began.” [M. S. Golwalkar, Spotlights, (Bangalore: Sahitya Sindhu, 1974), pp. 98-99.].

Thus, cow became another issue to attack Muslims and continues to be a factor in unleashing violence against them. The latest contribution to this theatre of the absurd was made by Haryana CM ML Khattar by arguing that Muslims can live in India but they would have to give up eating beef. He went on to say that “It is written nowhere that Muslims have to eat beef, not is it written anywhere in Christianity”. Khattar is right that in Islam and Christianity beef is not revered and is not a staple food. But he must know that Muslims and Christians got used to it in India. It was with the advent of Jainism and Buddhism which coincided with the rise of agricultural society animal sacrifices including cow and bulls (an integral part of Vedic rituals) were decried and cow came to be revered. The fact is that beef eating in India existed long before the advent of Islam on this earth and arrival of Christianity in India.

It’s shocking that a person holding a constitutional office in a secular-democratic country is touting extra-constitutional conditions borrowed from RSS shakhas for Muslims’ stay in the country. This gentleman, who is fond of flaunting his RSS background, should explain why only Muslims. Even Christians, Hindus and Dalits consume beef legally in seven states of the North-east, Kerala, Goa, Karnataka & West Bengal. Will they also be de-nationalized?

As a RSS senior cadre, he must be familiar with the name of Swami Vivekananda. This is what Swami said about eating of beef by ‘Hindus’ in ancient India. “You will be astonished if I tell you that, according to old ceremonials, he is not a good Hindu who does not eat beef. On certain occasions he must sacrifice a bull and eat it.” [Vivekananda speaking at the Shakespeare Club, Pasadena, California, USA, 2 February 1900, cited in The Complete Works of Swami Vivekananda, vol. 3 (Calcutta: Advaita Ashram, 1997), p. 536.]

This is further corroborated by other research works sponsored by the Ramakrishna Mission established by Vivekananda. According to C. Kunhan Raja, a prominent authority on the history and culture of the Vedic period, “The Vedic Aryans, including the Brahmanas, ate fish, meat and even beef. A distinguished guest was honoured with beef served at a meal. Although the Vedic Aryans ate beef, milch cows were not killed. One of the words that designated cow was aghnya (what shall not be killed). But a guest was a goghna (one for whom a cow is killed). It is only bulls, barren cows and calves that were killed.” [C. Kunhan Raja, ‘Vedic Culture’, cited in the series, Suniti Kumar Chatterji and others (eds.), The Cultural Heritage of India, vol. 1 (Calcutta: The Ramakrishna Mission, 1993), p. 217.]

Another great researcher on Hinduism, BR Ambedkar penned a scholarly essay (which is available on the internet) titled ‘Did Hindus never eat beef?’ According to his findings, “the Aryans of the Rig Veda did kill cows for purposes of food and ate beef is abundantly clear from the Rig Veda itself. In Rig Veda (X. 86.14) Indra says: ‘They cook for one 15 plus twenty oxen”. The Rig Veda (X.91.14) says that for Agni were sacrificed horses, bulls, oxen, barren cows and rams. From the Rig Veda (X.72.6) it appears that the cow was killed with a sword or axe”.

The Manusmriti which RSS wants as the constitution of India replacing the present Indian Constitution, in its chapter V mentions recipes of how different kinds of meats should be cooked/processed. The verse 32 says, “he who eats meat, when he honours the gods and manes, commits no sin, whether he has bought it, or himself has killed (the animal), or has received it as a present from others”. It does not bar beef.

This statement adds a new dimension in the Hindutva discourse on who is an Indian. So far Muslims and Christians were kept out of Indian nation for belonging to foreign religions, not being Aryans, not knowing Sanskrit and not having Hindu blood in their veins. They were described as Malechas. These conditions were imposed by VD Savarkar and Golwalkar. Now beef is another condition. The only problem is that with this new add-on many more Indians, Dalits and those Hindus who eat beef are going to be de-franchised.